Tackling the HSAs, one step at a time

Superintendent's alternative project proposal is first step but not enough

With less than two years before the Class of 2009 is scheduled to be the first year to only graduate students who passed all the High School Assessments (HSAs), state Superintendent Nancy Grasmick is conceding that students unable to pass all four tests ought to be allowed an alternative means by which to earn a diploma.

Requiring students to pass HSAs to graduate seemed like a good idea five years ago. The theory was that students would be motivated to take each HSA seriously and the test would provide a standard across the diverse counties of Maryland. Unfortunately, this has not been the case.

A high number of students in Maryland are in danger of not graduating because they did not pass all the HSAs, according to statistics released by the state. Of these students, minorities are the most at risk. In Anne Arundel County, for example, only 50 percent of black students and 54 percent of Hispanic students passed the algebra HSA, according to the Baltimore Sun. 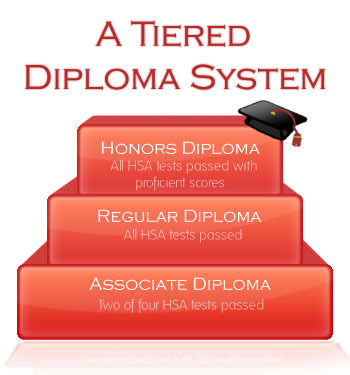 Now Grasmick and the Board of Education are retracing their steps by trying to find an alternative to the new policy. Grasmick proposed that seniors who had failed an HSA multiple times be eligible for a yearlong project that, once completed, would allow the student to graduate. She reasoned that this would help students who have trouble taking tests because it will allow them to work on a project free of any immediate time constraints.

While Grasmick's idea is good in theory, the reality is that most of the students failing the necessary exams may not do any better on a project that requires work for an entire school year. Further steps are required.

The HSA exams should still be administered, but passing all four should not be the requisite to earn a high school diploma. Instead, Maryland should implement a tiered diploma system.

This arrangement would award different diplomas based on levels of performance on the HSAs. At the minimum end, two passing HSA scores would allow the student to graduate with an Associate Diploma. Passing all four would award the student a Regular Diploma and passing with proficient scores would earn the student an Honors Diploma. When the Board of Education chose to add passing the exams to the graduation requirements, they opted out of the tiered system even though other states – including New York – adopted it.

It is important that the State Board of Education, which will vote on Grasmick's new proposal in October, approach it with a cold dose of realism. In the past, Grasmick and the Board have concocted plans that seem reasonable on paper, but when applied to an entire state, fall apart. Breaking down achievement on the HSAs into different levels will work because it acknowledges the fact that every student is academically different – the reality Grasmick has forgotten about.

The Board of Education has also overlooked that a portion of the students failing the HSAs do not plan to attend college. Many of their families are depending on these kids to get jobs fresh out of high school. In the current system the students that cannot pass each HSA will be denied their diploma, which is a necessity in the working world today. It is unfair for tests to make or break each student, especially when he or she has worked hard in high school and the tests are not reflective of most of the jobs they will be applying for.

The tiered system provides for everyone. Teachers do not have to worry about a drop in effort from more proficient students because they are rewarded with a higher level diploma and students who are more concerned with graduating from high school than attending college can earn their diploma by passing just two tests. The two-test mark should become even easier to reach now, after MCPS announced that the written responses, both brief and extended, will be phased out of the test starting in 2010.

Although time is running out for the Class of 2009, nothing is set in stone. The Board of Education has set up another review of the HSA requirements on the diploma, and it should take this opportunity to match its theory with the reality that students have different strengths and different goals.