Take one for the team: Linebackers sacrifice health for glory

To reduce health risks, colleges must continue care for athletes' health even after graduation

After four years of rigorous training and encouraged weight gain, only 3.4 percent of college football players will make it into the NFL, according to the National Football League Players Association. When their glory days fade away, the rest of these athletes graduate from football and move on to suffer from a disease that, according to the Center for Disease Control they share with 26.5 percent of Americans -- obesity.

Dr. Ben Levine, director of the Institute for Exercise and Environmental Medicine at Texas Health Presbyterian Hospital has cited an increase in the weight of football players today from those of 20 years ago. As the size of these athletes continues to increase, obesity is becoming increasingly prevalent among former college football players. 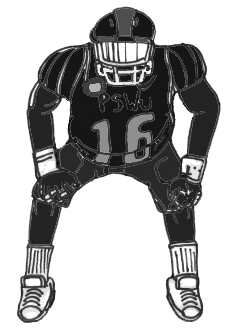 Photo:
Football at all levels has become the quintessential American pastime, and it is now being associated with what is considered to be the ‘American disease'. Americans watch college football with an almost religious fervor, and millions of diehard fans follow these young players, such constant attention adds a great amount of pressure to the athletes to be big and strong. It is this burden that has caused coaches to encourage weight gain among players, especially linemen, which often causes serious and long-lasting health problems. Such pressure from coaches is unhealthy and dangerous. Colleges not only to reduce the pressure to gain weight among athletes, but they also need to create a health plan for players that will ensure the well-being of these athletes even after they leave the team.

While playing football, these athletes are encouraged to eat heavily in order to put on more weight. In a study of 70 football linemen conducted by Jackie Buell of Ohio State University, around half of the sample suffered from metabolic syndrome -- a group of risk factors for many health complications caused by obesity. According to WebMD, a health information database, obesity is strongly linked to many other medical problems including heart disease, high blood pressure, diabetes and cancer.

Obesity is an incredibly serious health issue the college football athletic regimen puts players at risk for, however, it is the loss of nutritional support that encourages the cross over into obesity. After players leave the team, they also leave behind the nutritional support they once received as students. Though Wes Robinson, head athletic trainer of football at University of Maryland College Park, claims that none of his players are obese, he said that he does recognize the lack of support that follows these athletes after college. "When they leave, we have exit interviews on a medical standpoint and we remind them that [they] are changing activity level, but I'll be honest, it's not extensive,” said Robinson. He also mentioned that nutritional counseling is available while the athletes are attending school, but not after they leave. This is unhealthy and unfair to these athletes. They represent their school out on the field, and their health shouldn't have to suffer as a result.

Since coaches encourage their players to bulk up for the team, they must help them slim down after they leave. James Borcher, assistant professor of clinical family medicine at Ohio State University, as cited in the article "College Football Linemen Take One For The Team,” believes that providing assistance to athletes after college will help in stopping obesity among the players. "Many players will be done after college… Can we help decrease their risk for metabolic syndrome or insulin resistance, or even potential cardiovascular problems, with intervention and by keeping an eye on their natural progression once they're done playing? I think that's where we can make an impact,” said Borcher. Providing a help such as a nutritional plan, counseling and workout regimen to the athletes would seriously improve their health and combat many problems that come along with being overweight.

This trend needs to end. Players should be provided with a plan that will set them on a path to achieve good health after they leave the team. These athletes have already devoted so much time and effort to their team. The least schools can do is provide them with a post-college care plan to help them combat the disease common to so many Americans.