Waking up one hot June morning, junior Clara Kelly felt unusually nauseated. As she rose from her bed, aches shot up her back and into her head. Her body felt strangely hot - her temperature had risen to a steep 101 degrees. Lacking the energy to move and the will to eat, Kelly lay in bed for days, hoping to sleep off the illness that had suddenly consumed her. She felt almost certain that an influenza virus had struck her, but the timing seemed strange. In fact, the only influenza virus circulating at that juncture was the H1N1 virus. As the rest of the world grew terrified of the strange new pandemic, Kelly feared what the virus held in store for her body.

Photo: Rockville High School was closed in May because of a possible outbreak of swine flu. Picture courtesy of the Washington Post.

Photo: Rockville High School was closed in May because of a possible outbreak of swine flu. Picture courtesy of the Washington Post.

Widespread panic has been felt around the world as concerns about the spread of the H1N1 virus have spread. Alarm about the virus, or the "swine flu," however, did not specifically strike Blazers until reports of infections surfaced among students in Montgomery County back in May. Now, the number of cases in the D.C. area is on the rise, and reports show that Blazers are at high risk of infection. The Center for Disease Control (CDC) currently reports that Maryland is one of 21 states reporting "wide-spread influenza activity." To prevent further spread of germs during the approaching flu season, Blair's health room staff emphasizes that Blazers should be practicing good hygiene to prevent the spread of the pandemic.

The H1N1 virus is another strain of the common flu. Its symptoms are similar to those of common flu symptoms and may include fever, cough, sore throat, runny or stuffy nose, headaches, chills, fatigue, diarrhea and vomiting. The new strain is also spread the same way as the common flu, through coughing and sneezing, as well as through coming into contact with germs left on frequently touched surfaces, such as door knobs.

Photo:
In the six months following the first report of the virus in April, the attention of the local, national and international media has focused on the rapid spread of the H1N1 virus. The fact that the flu began to spread in April rather than winter's general "cold and flu season," has raised concern that the pandemic would result in a higher number of flu-related deaths than usual. In the final days of August, the President's Council of Advisors on Science and Technology (PCAST) estimated that 30,000 - 90,000 deaths could occur as a result of the virus.

A virus without warning

A significant number of reports of the virus occurred over this past summer, an unusual time for the flu to strike. In Kelly's case, the virus attacked her body at a surprising time in the year, and she did not know how to react to her body's sudden fatigue. Kelly's symptoms mirrored those of the "common flu." What started out as head and body aches evolved into high fevers, vomiting and intense exhaustion, Kelly describes. "I slept all day and had absolutely no appetite or energy," she details. "By about the fourth day it turned into a cold that lasted the rest of the week."

While she thought the illness might be the flu, the time of year for having such a virus seemed odd to Kelly. "I had no idea what it was, but by the time I went to the doctor I was pretty sure it was the flu," she explains. Her doctor confirmed that Kelly had the flu, though the only flu going around in the summer months was the H1N1 strand. Results from a nasal swab test were obtained two months after Kelly's recovery and confirmed that Kelly indeed had the H1N1 virus.

Photo:
Although Kelly explains that her illness was far from enjoyable, she did not feel that H1N1 strand of the virus was any worse than the "common flu." "It wasn't anything out of the ordinary so I didn't know why everyone was making such a big deal about it," she says. "It's definitely not as bad as people made it out to be." Clara recalls feeling skeptical about telling her friends she had has the virus out of fear of their reaction. "Everyone was so freaked out over the whole thing," she says. "I definitely got some weird looks from people after I told them I had had it. Some of my friends made fun of me and pretended I had cooties or something."

In June, senior Cameron Reed also felt the sudden symptoms of the H1N1 virus. He believes that he caught the virus from his brother, who also had the flu. Just like Kelly, Reed woke up with a headache, a bad cough and a 102 degree fever. Reed visited his doctor, who advised him to stay quarantined until he made a full recovery. "I had to stay in my house for seven days," Reed remembers.

Although Reed admits to feeling miserable with his symptoms during his summer vacation, he is grateful for not showing any symptoms during the school year. "I can't imagine having it now," he says. "Missing school for a week would mean missing a lot of work." To prevent catching another flu virus during the upcoming "flu season," Cameron explains that he plans on keeping up his hygiene. "I'm definitely washing my hands and using hand sanitizer a lot," he says. 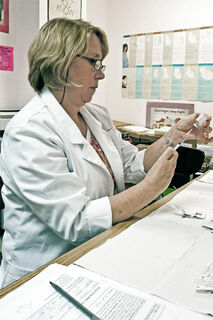 While Blazers may not need to worry about flu fatalities, they do need to be concerned about contagion, staff members in Blair's health room say. Though Blair nurse Debbie Bitonti has not seen any indication of symptoms of the virus among Blazers this fall, she knows what to look for. "The policy in the school system right now is that if [students] have a temperature of 100 degrees Fahrenheit and if they have either a cough or a sore throat that they must go home," she says. "They cannot come back until they are fever free for 24 hours." Bitonti also explains the significant likelihood that infected student spreading H1N1 to his or her peers is very high in a school as densely populated as Blair. "These things spread fast in classroom situations where you're coughing and breathing on each other," she says.

For Bitonti, students and staff adhering to usual, flu-prevention precautions will keep Blair swine-free. "It's not just yourself you're protecting - it's everyone around you," she says. "Keep in mind who you are exposing your illness to." Being hygienic and following these safety measures, Bitonti explains, should be habitual and will minimize chances of the virus surfacing at Blair. "It's the same sort of stuff we should be doing anyway," she says. "We're just trying to teach the kids so that they know to stay home when they're feeling sick."

Additional information on MCPS's policies on the H1N1 virus can be found on the MCPS web site.