Shuffling and chatter were audible inside Cole Field House at the University of Maryland on Thurs., April 19. The audience was scarce, a mere scatter of faces amidst a sea of empty seats. Yet that didn't stop Talib Kweli from stirring up a current of energy inside the echoing auditorium. Sending his meaningful rhymes reverberating through the airwaves, Kweli promoted his adage of black power in a top-notch, "quality" performance.

Headlining the Virgin College Mega Tour, which hits 18 colleges across the country, Talib Kweli's flows were smoother than ever as he united the crowd in an uplifting two hour show.

Kweli was accompanied by DJ Hi-Tek and two back-up singers with Mary J. Blige-esque vocals that helped balance Kweli's sharp rhymes with soulful R&B vibes. Kweli opened with a modified version of "Put it in the Air," a hit off of "Quality," his first solo album produced in 2002. 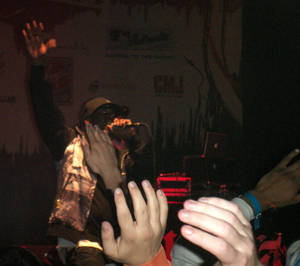 Photo: Talib Kweli and fans "put it in the air."

Photo: Talib Kweli and fans "put it in the air." Photo courtesy of Julia Mazerov.


Kweli owes much of his solo success to fellow hip-hop legend Mos Def, with whom he teamed up to form "the best alliance in hip-hop" and produce "Black Star." "Black Star" enjoyed wide success after its release in 1998, bringing track "Definition" into the limelight and labeling the album as one exploding with lyrical genius.

Though Mos Def was not at the concert, Kweli still shared some of "Definition's" empowering rhymes: "Stop acting like a [expletive] already/Be a visionary/ And maybe you can see your name in the column of obituary," with the help of DJ Hi-Tek.

Kweli also took advantage of his strong resumé of duets to spit some freestyle, which he performed during the verses of his absent counterparts. "Get em' High," a track off of Kanye West's "The College Dropout," was a crowd favorite, during which Kweli bashed the Bush administration and warned the audience not to "get shot by Dick Cheney."

Among some of the other stellar performances were "Get By," undoubtedly a general favorite on "Quality," and "Never Been in Love Before," fresh off of "The Beautiful Struggle."

Almost all of Kweli's lyrics carry the same message of prevalence and determination, a point further enforced by his tasteful, heartfelt shout-out to the victims of the massacre at Virginia Tech at the beginning of the concert. 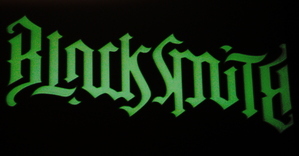 
Kweli also took a page out of MIMS' book and freestyled to his current chart-topper "This is Why I'm Hot," putting his own spin on the chorus hook. "This is such a beautiful beat," he shouted before launching into a bitter yet thoughtful denunciation of the current state of the rap industry, bursting with "fakers" who don't really understand what black power is all about.

He then took the audience back to the 80s, jamming to the Eurythmics' "Sweet Dreams." A hilarious slideshow of 80s dance party shots (with no shortage of mullets and parachute pants) played in the background, creating a nostalgic vibe for some of the audience's older members.

Overall, Talib Kweli flawlessly projected his voice and his rhymes to fill the entire, initially hushed stadium with a sense of vivacious empowerment. Performing a tribute to his inspiration, soul artist Al Green along with his own tracks from "Quality," "The Beautiful Struggle" and pending release "Ear Drum," Kweli provided an eclectic mix of genres and music through the decades for his widely diverse audience.

Continuing to solidify himself as one of the underground rap scenes most inspirational stars, Kweli once again proved that six albums and almost two decades after getting his start, he's still "on top of the world."


Julia Mazerov. Julia: -is a SEENIORRRR -is obsessed with Entourage -makes to-do lists like it's her job -takes naps a lot -is a riflery pro -goes to lots of concerts -has a weakness for cute tote bags, Starbucks Java Chip Ice Cream, and Kate Harter More »