With treatment, Blazers learn to channel anger into creative pursuits

At lunch a couple weeks ago, junior Leon Scales almost had a meltdown. He was trying to speak to his ex-girlfriend, but she brushed him off repeatedly to talk to someone else, leaving Scales feeling hurt, confused and upset. He felt his anger starting to get the better of him, pumping through the veins of his clenched fists and pounding heart - but instead of picking a fight, he turned around and walked down Blair Boulevard towards the band room. Picking up his drumsticks, Scales sat down and began to play.

Like thousands of other teenagers in the U.S., Scales has trouble controlling his anger, prompting his involvement in various conflicts. According to a Gallup news poll conducted in April 2005, about 11 percent of teenagers ages 13-17 say that they get angry several times a week. Although the Gallup poll notes that the majority of teens deal with their rage by walking away, for some Blazers, ignoring anger is simply not enough. These students find solace instead by channeling their emotions into creative pursuits like art and music.

Scales knew that he needed help when he realized his anger was affecting his closest relationships. "I found myself getting angry at my family and friends," Scales says. His two-year relationship with his ex-girlfriend ended because of his anger. "I was so upset one time, I pushed her," Scales admits embarrassedly. "I didn't even realize what I was doing. That's when I knew I was in a deep hole."

Like Scales, senior Edith Leiva recognized that her uncontrollable anger was hurting her relationship with her family. "I would reach a point where I couldn't take things anymore and I would lose it." Leiva says she mostly took her anger out on her two sisters, getting into both verbal and physical arguments with them. The anger not only prompted Leiva to become involved in fights in middle school, but also affected her grades. "I really needed to find a way to release it," Leiva says. "It was ruining my life."

According to Anutza Bellissimo, Director of the Stress and Anger Management Institute (SAMI), anger can be healthy in small doses - but when it gets out of control, it can severely affect people's relationships. "There's a lot of finger-pointing and blaming that can go on in the family, especially because teens are often reluctant to take responsibility for their actions," she says.

Studies have found that anger in teenagers is one of the main contributors to fights and violence in schools. A 2007 Centers for Disease Control and Prevention Youth Risk Behavior study reveals that more than 35 percent of high school students have been in a physical fight on school property one or more times in a year, usually because the students were unable to control their reactions to stressful situations. Furthermore, according to Bellissimo, when teenagers feel insecure and misunderstood, they often express themselves with aggression. "The biggest part of anger management is identifying the individual's self-worth," Bellisimo says. "We have to acknowledge what creates anger and stress in the person and teach them to express it and communicate in a healthier way."

Senior Guilherme Pires remembers the nasty arguments he often had with his girlfriend because he could not control his anger. "We would scream and throw things at each other. I think we broke up eight times because of it," Pires says.

Like Pires, Scales also used to deal with anger by throwing objects, getting into fights and destroying property. "I would hit things, break stuff, punch the wall," Scales says. 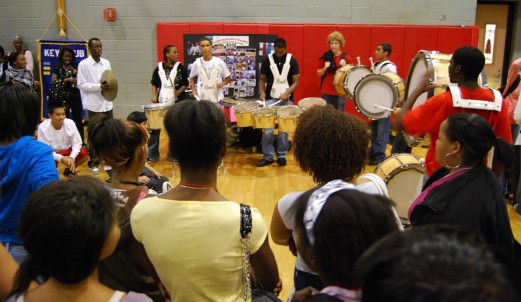 Bellisimo maintains that the main cause of anger in adolescents is the lack of communication between teenagers and adults. "Sometimes, when a teen is undergoing growing pains or transitions, they can feel pressured by the expectations of an adult," she says. "So, there is a disconnect in emotional support."

Because there are so many sources of stress in his life, Scales recognized the need for outside help. After discussing his problem with his mother, Scales got in touch with a therapist in early October and now sees him three times a week. "He's really helped me to listen to other people's opinions and ignore negative things and keep my cool in stressful situations," Scales says.

Scales' therapist recommended strategies like deep breathing and walking away from situations to prevent anger from surfacing. "A lot of people make fun of counting to ten," Scales says, "but it really helps."

Leiva has started to warn her friends when she starts to get angry so they know to stay away. "I don't want to explode on them; they don't deserve that," she smiles. "My therapist told me that warning them is the best way to make sure I don't ruin any friendships."

But when these techniques fail, Leiva and Scales both turn to their respective passions to release anger. For Scales, relieving anger is easiest when he is sitting in front of his drum set. "I've been drumming all my life," Scales says. "Just yesterday, when I got upset at someone in my family, I went into my garage and started drumming."

Leiva finds comfort through a different medium: art. Since she was young, Leiva has been drawing and writing to express her emotions when she finds it difficult to articulate them verbally. "I have binders I've kept that are full of papers I've written on or drawn on," Leiva says, pulling a lined notebook filled with drawings out of her bag. She flips to a page in particular with a careful sketch of a sword piercing a heart. "That's the inspiration for a ceramics project I'm working on," she adds. Leiva says that ceramics provides her with a way to construct three-dimensional representations of her feelings.

Music has been like a safety net for Scales. "When you do something you love, you're going to forget about what people say," Scales says. "All you have to do is focus on it and everything else goes away."

With time and practice, therapy has helped Pires and Leiva deal with anger in a broader way. Pires went to a counselor with his girlfriend to try to resolve their problems, and he believes the therapy helped their relationship. "[The therapist] told us to write down all the problems we had instead of getting in a fight," Pires says. "Now we talk about it instead of arguing."

Leiva's approach to anger management is more individual, as she deals with situations by improving her own self-confidence. "I try to get revenge on people I'm mad at in a harmless way," she reflects innocently. She describes a time when a girl insulted her style and fashion, leaving Leiva feeling inadequate and angry. "I could have yelled at her," Leiva says. "But instead I tried out for the fashion club, got in and became head designer. Everything she tried out for, I did better." Leiva has used this strategy on multiple occasions, earning her prizes in her middle school's Geography Bee, an entrepreneurship competition and a ceramics competition. "It felt so good to win - it was my reward," Leiva grins.

Regardless of the situation, these teenagers now realize that anger is detrimental to health, relationships and happiness. With the healing lessons of music and art, Leiva and Scales are learning to think before they act. "There is nothing you can do to change me, but when I focus on expressing myself with ceramics and drawing, I feel better," Leiva says. "Oh, and nobody gets hurt."