Why West Virginia's teachers went on strike for nine days

Instead of worrying about if her students would eat dinner or if they have a proper set of gloves, West Virginia teacher, Tiffany Bell, is troubled about how much money she has in her bank account. She wonders what her family will eat for dinner or whether she has enough in her checking account to purchase a winter coat. With a take-home pay of $2,200 per month, Bell knew that something was broken in the public education system. 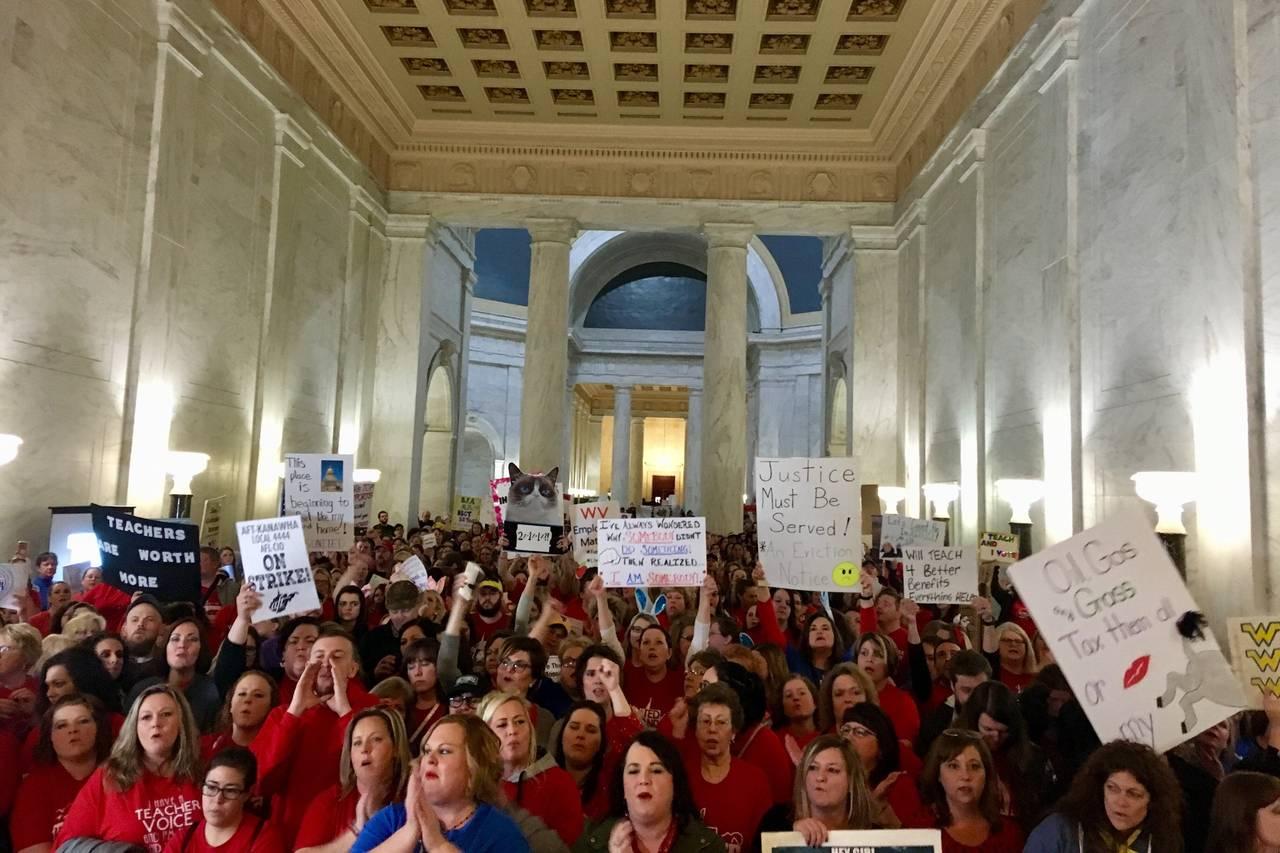 Photo: Teachers from all over West Virginia strike for nine days to get a 5% increase in their wages.

Photo: Teachers from all over West Virginia strike for nine days to get a 5% increase in their wages. Photo courtesy of John Raby/Associated Press.

According to the West Virginia Department of Education, the state employs 19,488 teachers to teach 277,136 students, with 680 public K - 12 schools being split into 55 counties. Meanwhile, the average salary is ranked to be the 48th best in the nation, according to a 2016 study conducted by the National Education Association. This ranking was not expected to go any higher. Governor Jim Justice passed legislation that provides a 2% raise of the next year, a 1% raise for both 2020 and 2021, and a freeze in premiums for 16 months to benefits. Bell realizes that the increase wasn't even enough to cover cost of living expenses. Despite the enormous size of the state's school system, she, along with several thousand others, came together to strike for higher wages. The strike began on February 22 and lasted for nine days. The demands of the West Virginia Education Association (WVEA), the state's teacher union, was simple: they demand a 5% increase in the following school year and would not return return their classrooms until the proper legislation was passed.

After eight days, it seemed as if an agreement is reached as a bill approving the proposed pay hike passes in West Virginia's House of Delegates. However, upon arrival of the Senate, the bill was modified to approve a four percent increase. This new bill was rejected by the House of Delegates, and teachers, and so a joint legislative committee was held to address the differences between the two bills. Ultimately, the Senate agreed to the House's position and the teachers returned to their classroom on March 7.

As West Virginia superintendent of schools, Steven Paine recognized that the teachers were deserving of higher wages and better healthcare plans, but also stressed work stoppages by public employees are not lawful in West Virginia in a statement he made before the march. Patrick Morrisey, State Attorney General, states that the strike was illegal.

Despite similar laws in other states, the West Virginia strike is changing the national conversation on teacher salaries. In Arizona, teachers demanded higher wages by conducting a series of #RedforEd demonstrations. Similarly, in Kentucky, educators organized rallies to protest proposed pension cuts. In Oklahoma, teachers followed West Virginia's actions and pledged to go on strike on April 2 if the Legislature does not increase funding for the school systems.

The strike even inspired teachers in Montgomery County and throughout Maryland. On Monday, March 19, nearly 2,000 educators from all districts of Maryland gather in Annapolis to march for an additional $500 million of the $2.9 billion funding deficit in the state's education budget. In 2008, Maryland legalized gambling in the state in order to provide additional funding for the school system through the revenue. However, the school systems never got additional funding, and the money is now used as a source of revenue to continue paying educators the same amount. 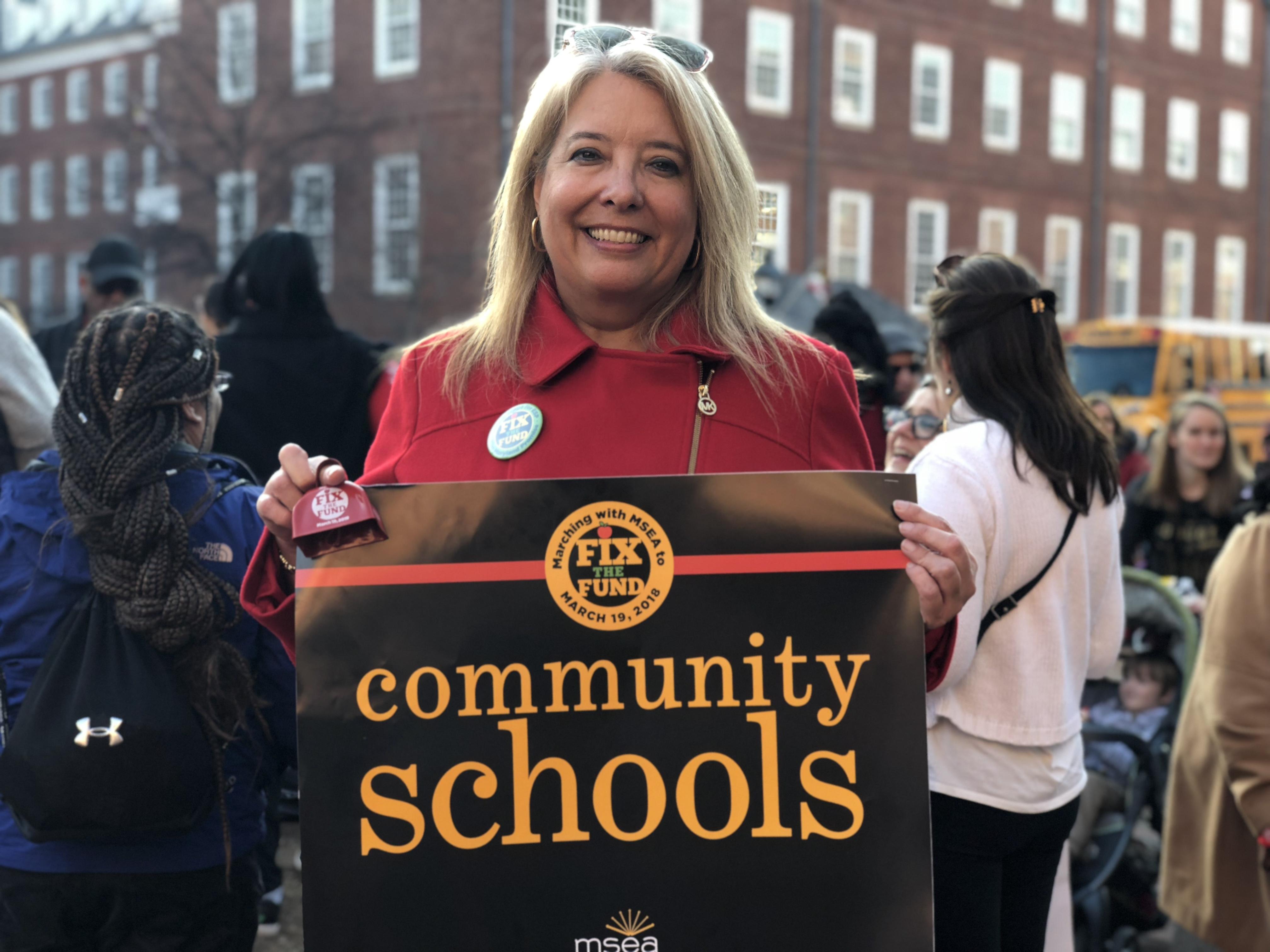 Photo: Cheryl Bost was one among 2,000 Maryland educators that marched in Annapolis.

Photo: Cheryl Bost was one among 2,000 Maryland educators that marched in Annapolis. Photo courtesy of Tiara Oldfield.

The Maryland State Education Association (MCEA) has put forth a "Fix the Fund Act" to resolve the issue. "The bill that's in the legislature right now, the 'Fix the Fund Act', would put a constitutional amendment on the ballot in November to say that the casino revenue will go into a black box and can only be used to add on to education funding and not be used to supplant as it has been used previously," says Cheryl Bost, Vice President for the MCEA. The educators also advocate for a increase in Education Support Professionals (ESPs) wages. "We're also supporting our Education Support Professionals, asking for a living wage bill to be paid so that our custodians our paraeducators, our secretaries don't have to work two or three jobs just to make ends meet," Bost says. The state senate approved the act Monday night.

West Virginia teachers had no idea what effects successfully striking would have, something not accomplished for the past 27 years. They began a movement, one that has been inspiring teachers and spreading to school systems throughout the nation.