One year after the High School Assessments (HSA) Bridge Plan was first introduced, some teachers are questioning the standards of the HSAs and the HSA bridge projects as graduation requirements. 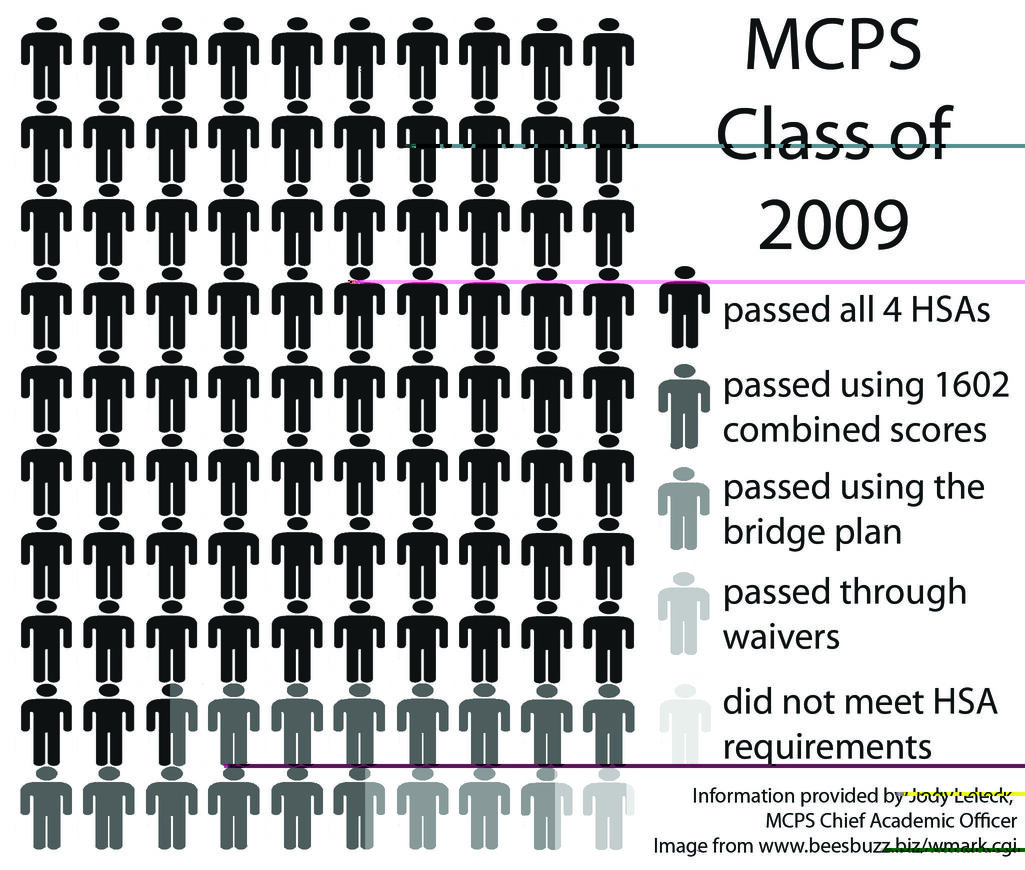 Photo:
The bridge projects are designed to provide a way for students who have trouble succeeding on the tests to fulfill their graduation requirements, which many teachers view as a necessary option for students. Others, however, question the difficulty of the bridge projects compared to that of the tests and deem the projects insubstantial and partial substitutes for the academic content tested on the HSAs.

The path to graduation

The HSA exams are statewide standardized tests in the subjects of English 10, Algebra, National, State and Local Government and Biology, which every Maryland student must pass in order to graduate. According to MCPS Chief Academic Officer Jody Leleck, beginning with the class of 2009, a student may either take and pass each test separately, achieve a minimum combined score of 1602 or complete a bridge project.

Maryland Superintendent of Schools Nancy Grasmick said that Maryland teachers develop the HSAs in conjunction with the Maryland State Department of Education. "They are based on learning standards that have been in place across the state for a decade," she said. Those Core Learning Goals, created in 1996, can include anything from using functions to solve real world problems in Algebra to demonstrating knowledge of historical political systems in NSL, according to the HSA web site. However, now, after the first class required to pass all the HSAs has graduated, teachers have started to form their own opinions about the effectiveness of the alternatives.

The state first implemented one such alternative, the Bridge Plan for Academic Accountability, commonly referred to as the bridge project, in fall 2008, according to Leleck, as an option for students who fail to pass the HSA in one or more subjects. Assistant Principal Suzanne Harvey said that all Maryland students must pass the course on which the HSA subjects are based on first, but fail the HSA twice in order to be able to submit a bridge project.

Every year, there are about four possible projects a student can complete for every HSA subject, each focused in a specific content area of the course, according to Debbie Fickenscher, a former NSL project monitor at Blair. The objectives addressed in the bridge projects match the content standards tested on the HSAs, Grasmick said, but while the HSAs test for all of the Core Learning Goals of the course, each bridge project tests for one goal.

According to Harvey, the bridge projects range from researching for NSL to experimenting for Biology. Based on the HSA scores, the administration identifies students who need to complete bridge projects, according to science resource teacher Summer Roark Thiero. Students work with a project monitor, usually the resource teacher from the subject of the bridge project, to complete each step of their projects. After the project monitors double-check that a student has finished all the state-approved steps, Harvey said that she puts the end product together and sends the project to the MCPS Central Office for approval. If accepted by a county review panel, a single bridge project can raise a student's HSA test score for the specific course by 20 points.

When students take the HSA, they are categorized as "basic" (below grade level), "proficient" (on grade level) or "advanced" (above grade level). AYP mandates that a certain percentage of students must pass the HSAs every year in a given school, but the initiative also requires a specific graduation rate for each school. Leleck said that students who complete bridge projects in order to meet their HSA requirements are recorded as "basic" because they did not pass the HSAs. She said that if a school tries to use bridge projects to increase their graduation rate, the school takes away students who could contribute to meeting the HSA requirements.

Teachers will select students who are close to passing to retake the HSAs, said English resource teacher and bridge project monitor Vickie Adamson. The students who complete bridge projects are typically those who are further away from passing, she said.

Grasmick attributed Maryland's increasing graduation rate partially to the new bridge project. "We found that students became more engaged in their coursework because of the new HSA requirement, and thus more likely to graduate," Grasmick said.

Because the bridge projects are an alternate way to relearn information and subsequently pass the HSAs, Grasmick believes the projects contributed to the increase. "Certainly the Bridge Plan has helped those students with test-taking difficulties make their way to graduation," she said. "[The Bridge Plan] also proved to be a powerful teaching tool."

History teacher George Vlasits, who has worked with bridge projects in the past, believes that while there is a need for an alternative to HSAs, bridge projects do not challenge students sufficiently. "My experience with the NSL HSA was basically that the project is just filling out worksheets," Vlasits said. "That is the epitome of not educating people."

According to Adamson, however, comparing bridge projects to HSA is unfair. "It's like comparing apples and oranges. There are different natures to the exercises," she said. "They're an alternative, but students still need to demonstrate thinking." English teacher Adam Clay said he supports the bridge projects as an option for students. "I don't feel that it lowers standards. I see it as a different way of measuring standards," he said. "It's good to have an alternative because tests are hard for some students."

According to Andy Rotherham, co-founder of the national education policy think tank Education Sector, alternative-testing systems such as the Bridge Plan cannot be classified as either good or bad; rather, they lie in the middle. "They can be rigorous and provide an alternative, but it can be really hard to do that in a way that doesn't create loopholes," he said. "They tend to go off tracks more often than they work."

Grasmick said that the bridge projects have been proven to be effective substitutes for the HSA for students who have failed their exams. "Reviewers and educators tell us that the Bridge Project Modules are of equivalent difficulty to the tests," she said. "They are also labor intensive." According to Adamson, students spend an average of 15 to 20 hours on each of their bridge projects. "It's an involved, independent project, where the students show, 'Here, look, I can think,'" she said. For example, according to Roark Thiero, a biology student could complete an experiment examining the effects of different detergents on plant growth for their bridge project, instead of taking a written test. In the case of biology, she said she feels the Biology bridge project is at least as difficult as the Biology HSA, if not more challenging. "It's easy to take the test, in my opinion," she said.

English teacher Keith Anderson also said that the bridge projects provide a necessary alternative to test-taking for students. He said that from what he knows about the English HSA, the bridge project requires more work and is more difficult to complete, unless a student has trouble with timed tests or reading comprehension. "I think it's human that they offer an alternative to just the HSA exam," he said. "The kid has to show that he's willing to go the extra mile."

For senior Gladys Mejia, however, who is completing an English bridge project, the tests were more challenging for her because of the pressure involved with test taking, she said. While working on the bridge project, she has access to help from teachers, the Internet and other outside resources during the project, and does not have to remember content from the entire year.

Fickenscher also said that the projects require independent thought, but make it possible for the students to graduate high school with minimal test-taking skills. While Fickenscher said each of the bridge projects only looks at one subtopic of the subject, it helps students focus because it gives them a specific task and someone who monitors them every step of the way. For example, whereas the NSL HSA examines students on a number of learning goals, a specific bridge project may only focus on the Bill of Rights, according to Fickenscher. Eventually, she said, the Bridge Plan can help students better comprehend the HSA subject as a whole.