Blair falls after giving up a three-point lead

After a tremendous run in the playoffs, Blair's handball team fell to Walt Whitman 20-19 in the county championships on Nov. 7. The Blazers were unable to come back from a two-point deficit late as they fell in their second championship appearance in three years.

Early in the game, the Blazer defense stifled Whitman's offensive attack. Blair only allowed six goals in the first 15 minutes of the game, using their defensive success to jump out to an early 7-6 lead. Poor shot selection was an issue throughout the game for Whitman, especially in the first half. Many of Whitman's best players were held well beyond the perimeter unable to penetrate near the net. Junior goalie Zane Shafer stepped up for the Blazers with a huge save on a penalty shot with one minute left in the half . Shafer's save led to a quick goal on the other end by senior captain Alya Hall, giving Blair a 12-9 lead at halftime. 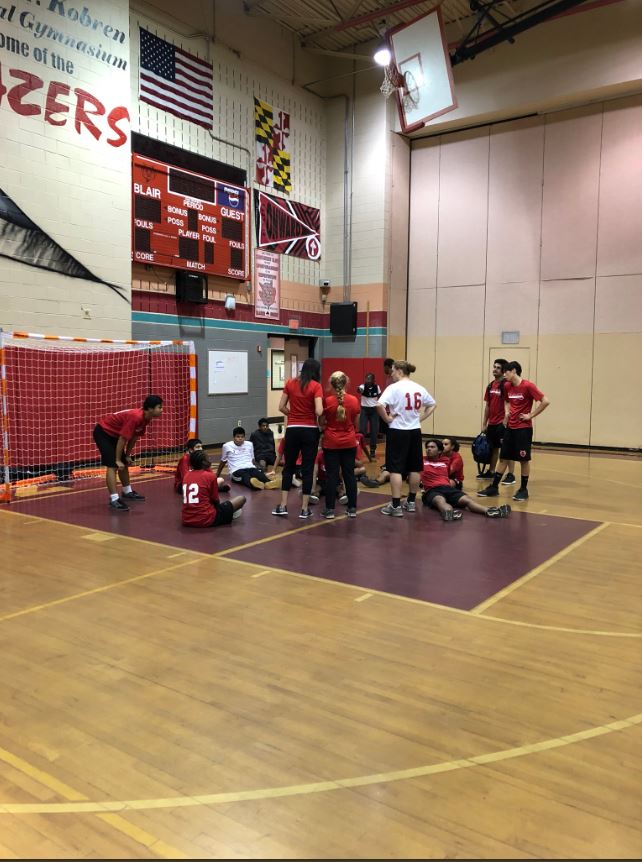 Photo: Blair falls after giving up a three-point lead.

Photo: Blair falls after giving up a three-point lead.

Coming out of the break, Blair had a tough time getting started on offense. No goals were scored by either team for the first four minutes until Whitman broke through with three straight goals to tie the game at 12. From there, the goals went back and forth with senior Ari Strauss providing a burst of offense for Blair. Whitman's offense stayed aggressive, enabling them to take a commanding 20-18 lead with 3:23 minutes left to go.

As the clock winded down, Whitman dribbled the ball around the Blair defenders without shooting. This should have been deemed illegal, according to Blair coach Alex Cullen. "There's a rule that if the offensive team is not trying to score, then they can only hold the ball for 30 seconds. They were able to take almost a minute and a half off the clock without the refs calling it," Cullen said. With 18 seconds to go, Blair made it a one-score game by scoring another goal, but unfortunately for them, it was too late. Whitman ran out the remaining time, giving them the 2018 county handball title.

While it was a devastating loss, Shafer was able to stay positive as he reflected on what got Blair to the finals. ''It's a special group of kids," Shafer said, "We just bond. It's an incredible feeling to be a part of such a great team." Cullen was also proud of her resilient players despite the defeat. "They played awesome. They worked really hard. No team is perfect, but they played the best they can. I'm proud of them," Cullen said.

The handball season may be over for the Blazers, but there's always a brighter side of the outcome. Blair won their division for the fourth time in school history and was the second best team in the state. Next year, the goal is to get right back to the championship and hopefully bring home a victory.