TechnoLogical: Fork over that HapiFork

Despite the thousands of diet pills and exercise machines currently in existence, an emerging invention is gaining importance in the weight loss industry. A new fork, the "HapiFork," helps users count calories by monitoring how fast they're eating and then signaling when they consume more than one bite in the span of ten seconds. In forcing them to eat more slowly, it will supposedly help them develop healthier eating habits, and therefore lose weight. While the HapiFork obviously cannot singlehandedly make a dent in America's obesity rate, it will help users take their first steps to weight loss. 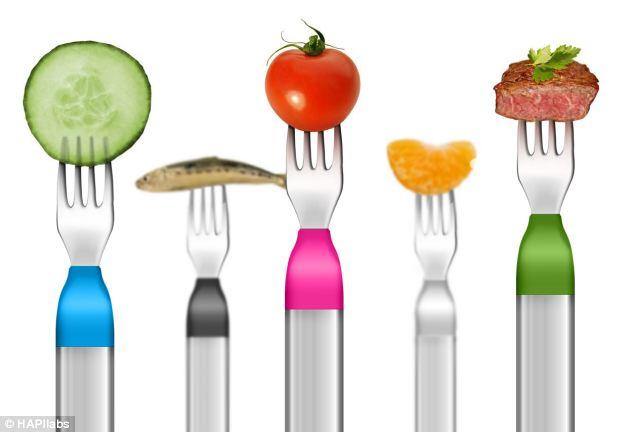 Photo: The HapiFork monitors how quickly users chew in an effort to help them lose weight.

Photo: The HapiFork monitors how quickly users chew in an effort to help them lose weight.  Photo courtesy of Daily Mail.

The HapiFork monitors "the number of 'fork servings' taken per minute and per meal, the specific duration of each 'fork serving' interval and overall meal duration," according to Fox News, and then connects to a smartphone or computer app that will process the data and allow users to track their progress. Although currently only available for the first 1000 donors to the Kickstarter project HapiLabs started last Wednesday, the online campaign has already raised $71,913 of the proposed $100,000 goal, funds which will allow the HapiFork to be available to all consumers later in the year.

According to the HapiLabs website, many scientific studies have shown that eating quickly directly correlates with a greater amount of calories consumed. Since it takes around 20 minutes for the brain to express satiation, it is likely that eating too quickly results in overconsumption simply because the brain doesn't have time to catch up with the stomach. The HapiFork promises not only to reduce weight gain, but also to ease digestive problems, gastric reflux and postoperative complications.

However, one of the most significant problems with the HapiFork is its price tag. For Kickstarter benefactors, the cost is currently $89; however, it will increase to an even pricier $99 once it is available for all consumers. Research has shown that low-income individuals are more likely to become obese, according to the Food Research and Action Center (FRAC) simply because they don't have access to food that is simultaneously healthy and cheap. Since many food-insecure people could not afford the HapiFork, their health issues would only be further exacerbated.

In this sense, the HapiFork will not be available to the population who would most greatly benefit from using it. Despite its inability to help every person in America struggling with weight loss, the HapiFork could potentially be beneficial to those who will have access to it. It will also help increase awareness about healthy eating habits and promote other positive choices in both users and nonusers alike.