Technological: Memory implants could lead to a robotic human takeover

Researchers at MIT successfully implanted false memories into the brains of laboratory mice. I couldn't help but wonder what purpose manipulating a mouse's brain serves. Well, Theodore Berger, a biomedical engineer and neuroscientist at the University of Southern California, has the answer. He believes that not too far in the future, individuals with severe memory loss will get electronic implants in their brains to restore their memories. If science can restore memories, or create false ones in mice, why not implant encyclopedic knowledge?

The ability to tamper with people's memories could affect the way our world functions, and not necessarily for the better. From horror movies about robot uprisings to the everyday threat of robots displacing workers, the fear of chip-driven alien entities dominating humans is pervasive. 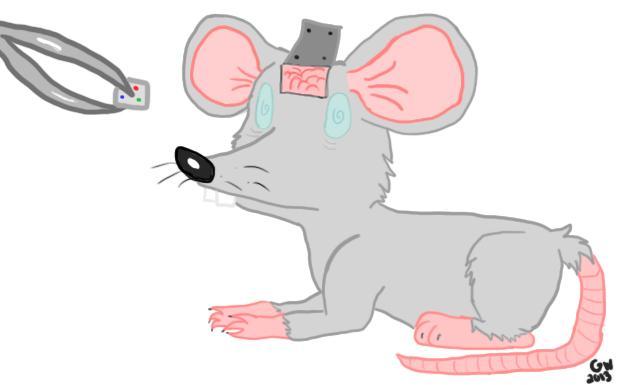 Photo: A neuroscientist team implanted false memories into the brains of mice.

Now imagine if this alien entity were itself a human. No longer would getting an education be necessary, because with a single surgical operation, individuals would have the ability to remember everything they had, literally, never learned.

Some Blair students see this development as a golden opportunity to level the playing field intellectually. Nevertheless, Junior Kaylan Hutchinson keeps her expectations in check. "Knowing tons of information without ever having to learn it would be really helpful. But even with all the information in the world, I still couldn't compete with students from [Blair's] magnet program."

In any case, let's not get carried away, because although the prospect of feeding class notes into your head to study for tests sounds enticing, we're far from creating a race of cyborgs. Currently, scientists are able to operate cells in a mouse's brain so it associates certain emotions with locations. A neuroscientist team at the RIKEN-MIT Center for Neural Circuit Genetics conducted a study that, in brief, proved that through manipulating individual neurons, they could cause mice to associate a box that previously posed the rodents no problems with a traumatic experience. When the mice reentered this box, they became paralyzed with fear.

While memory implants may not yet be the steroids of learning, they do show brilliant potential, especially in medicine. Berger anticipates curing people who lost memory as a result of Alzheimer's, stroke or injury.

I'm looking forward to some less significant applications. For instance, upon early signs of fatigue at night, I could use a memory alert of how lousy it feels to study past midnight and then be awaken before sunrise.