Teen production of "The Crucible" is on its way

Four actors stand in a circle, rolling their heads, breathing deeply and meditating in a room of the Roundhouse Theatre Educational Center on Feb. 8. They are releasing their stress and preparing to leave their own personalities, thoughts and feelings for each another being. These actors, like actors in any play, must cease being themselves to assume the roles of their characters. 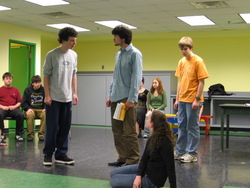 Photo: Actors in "The Crucible" rehearse at the Roundhouse Education Center.

Photo: Actors in "The Crucible" rehearse at the Roundhouse Education Center.

It is the end of the first month of rehearsal, which began Jan. 9. Before the actors go to rehearse, they stand in a circle and play a sentence game where each person says one word, forming a sentence by taking turns around the circle. "It's all about listening to each other to prepare for acting," says Michael Kelly, 24, acting and teaching apprentice for Roundhouse Theatre Education.

Now that the warm-up is complete, the rehearsal can begin.

In order for the actors to understand their characters and begin the process of rehearsal, they must understand the plot of the play. "The Crucible" is about witch trials and conflicts in seventeenth century Salem, Massachusetts concerning the use of the trials for personal gain versus the good of the people. The play explores the characters of Reverend Hale, Abigail, Reverend Parris, Proctor, Elizabeth and Deputy Governor Danforth. Proctor commits an act of adultery with Abigail and struggles with the truth and what he should do about his sin. Abigail convinces Mary to accuse Proctor of witchcraft and he is put in jail. As Proctor struggles between the choice of life and death at the expense of his fellow accused, other characters also suffer for their selfish acts.

The actors are still in the beginning stages of rehearsing the play. The rehearsal process begins with a read-through of Act Two, Scene Three. Kelley and the four other teen actors read through the script with emotion, assuming their characters' roles. Now and then, Graber will interject and ask a question: "How has your character changed?" Graber reminds the actors that they have to be aware of the changes that the characters in "The Crucible" are going through throughout the entire play. "I challenge them to think in new ways [about their characters]," says Graber.

After each has answered, they continue the read-through. The group pauses again as senior Matthew Hague from Springbrook High School clarifies what is going on with his character Reverend John Hale at a particular moment in the scene.

Once finished reading through the play, the actors are ready to truly assume the personalities of their characters. The next step is to begin staging, as Graber decides how she wants the actors to be arranged on the set. Through trial and error, she finally gets what she thinks looks good, arranging the actors on the stage in an appealing manner.

Sometimes Graber is out on the floor working with the actors, showing them where to be placed around the props. At other times, she sits quietly at a table, making note of each actor's performance. Graber notes what she thinks they did well and what they need to change about their positions, reactions and delivery of the lines. "It's my job to take the words on the page of the play and give the actors material to tell the story," Graber says. Meanwhile Stage Manager Laura Cole, a junior, makes note of each character's position corresponding to each character's line on a master photocopied script. 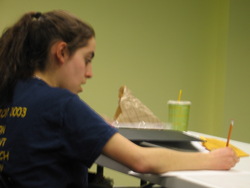 Photo: Junior Rebecca Graber makes notes as the actors rehearse the play. Graber is the director of this year's Sarah Play, "The Crucible."

Photo: Junior Rebecca Graber makes notes as the actors rehearse the play. Graber is the director of this year's Sarah Play, "The Crucible."

Part of producing a show means thoroughly understanding the characters. For many of the actors, this is challenging. Hague, who plays Reverend Hale, finds the character to be very different from ones he has played before. "The hard part is that Hale is kind of a stiff. He changes so much [and] goes from being a leader to a follower," says Hague, mentioning that he is used to playing comical characters, a stark contrast to the serious one of the Reverend.

The job of an actor is to also assume the roles of the characters, but also portray them in a unique way, incorporating some parts of their own personalities. "I try to make every character a different aspect of me," says Kelley, who plays Deputy Governor Danforth. Danforth is a harsh, righteous man who demands order and sentences suspected witches to their death.

Lisa Ohanian, a senior at Magruder High School, plays Elizabeth Proctor. Like Hague, her character goes through many changes throughout the play, which makes acting difficult, Ohanian says. Despite this, Ohanian has enjoyed learning about her character. "I'm having a good time figuring out who she is," she says.

While the actors are learning their lines, Graber is busy trying to put the show together. Once chosen as director of "The Crucible," Graber began to hold auditions for the cast. "We really looked for people who had chemistry with each other," she said about the cast selection. Graber chose teens that she felt fit the role of their characters and made them unique. "They all took their characters in original directions," she says.

After the cast list was decided, Graber began to visualize what she wanted her version of the play to look like. She has to bring together all the production elements, for example where the lighting is to be placed during the show, she says. Prior to rehearsal, Graber gathered information on the town of Salem to get a background basis for the play. Graber also said she looked for quotes about the witch trials that will be projected during the play and began to gather props.

This is Graber's first time directing, though she has been involved in drama since she was six. "I work between one and five shows a year," Graber says. Directing a play has always been her goal and she has finally achieved it. "I wanted to see a show from all angles," Graber says.

As Graber and the actors interpret the play in their own way, the rehearsal continues. The actors and Graber work together to make note of staging throughout the scene. The run-throughs are slightly different each time, as the positions of each character are not finalized. Similar to the read-through, Graber makes suggestions to the actors during this staging process. "Try being so upset you have to go to the bench," she says. "I want to change it up a bit."

A line in the play reads "Cling to no faith when faith means blood." "To me, that is the motto of the show," says Graber. The play revolves around the theme of lies and distinguishing between lying for good and bad purposes, according to Graber. Graber chose "The Crucible" to be performed because she liked its message. "I love how universal it is," says Graber. "It's a message that resonates everywhere and can be interpreted in many ways," she adds.