The life of a Blair substitute

They're here every day.

Writing on the board, typing on the computer and assigning worksheets, they look just like the myriad of other teachers at school, save for one key difference – when the day ends, they leave…for good.

They are the substitute teachers, temporary instructors who take the place of teachers who have to leave school. Main office secretary Julie Riveria estimates there are six to 10 substitutes at school every day – with the number rising as breaks draw close. Though sometimes treated differently from "regular" teachers, substitutes believe that their role at Blair is the same – to pass knowledge on to Blazers.

This is not a vacation

According to Max Goldman, a Blair substitute since 2000, students who treat their teacher's absence as a time to fool around and not focus on schoolwork make his job difficult.

"Too many of the students look at a substitute as a day off," he says. "Their teacher is not there, and they think that is a vacation."

Despite this attitude, Goldman is unfazed by the task at hand. "I feel, when I come to school to sub, I have to accomplish the lesson plan the teacher has left for me," he says. 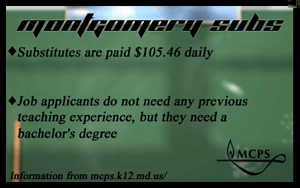 "This teacher has asked me to work with her kids while she's gone or he's gone," she says. "I have to accomplish that goal. I'm on a mission when I come here. I didn't come here to babysit."

Though Kirksy strives to ensure that the lesson plan is completed, she has been forced to "give up" on some classes – telling the teacher that she and the class did not "mesh."

"If I can't connect with a group for some reason or another, if I can't settle them down, I may not work with them anymore," she states vehemently.

Kirksy, who has worked at Blair since 2000, describes Blazers as "great kids." A traveler who has visited over 17 countries, she says that she enjoys sharing souvenirs and pictures from her trips with the students and teachers.

"Recently, I went to Prague and Salzburg, Mozart's birthplace," she says. "If I'm working in the music department, they like that."

In her time at Blair, Kirksy feels that she has truly become a part of the Blair community – what she considers the reward of her occupation. This year, she plans on attending graduation to see the many of "her" students receive their diplomas.

"I tell my students 'I'll be right there to see you graduate at the Comcast Center,'" she says, laughing. "I will get out of bed at nine, and I want to see you march."

Jose Gounder, another substitute who has worked at several schools in the county, had one of the most rewarding experiences while at the old Blair. One of the students he taught frequently was a "real troublemaker," and Gounder was forced to let him outside of the classroom. Finally, one day, the student got tired of sitting outside and Gounder permitted him to come in on the condition that he behave in class.

Kirksy also says that she has had many "memorable" experiences while teaching Blazers. But, her favorite happens every day – the chance to interact with a new group of students each time she teaches. She has dubbed this the "honeymoon period," a time when she and the students can get to know one another and enjoy each other's company.

Similarly, Gounder enjoys taking the opportunity to pass on a little wisdom to each of the students he meets.

"You try to impart some knowledge to [the students]," he says. "I like to tell them a little bit of life, you know?"

Gounder sees the small amount of time he spends with the kids as bittersweet. While he gets to give each student a taste of his teaching style and experience the different perspectives of different students, he is tempered by the fact that he cannot be with them all the time. So, Gounder has summarized the basic goal of his job into a short phrase: "You make sure that [the students] continue learning."