After thousands of termites emerged in the arts hallway last Tuesday, a county exterminator has indicated the possibility of a termite infestation at Blair. The termites do not pose any immediate hazard, but the school may require treatment over the summer. 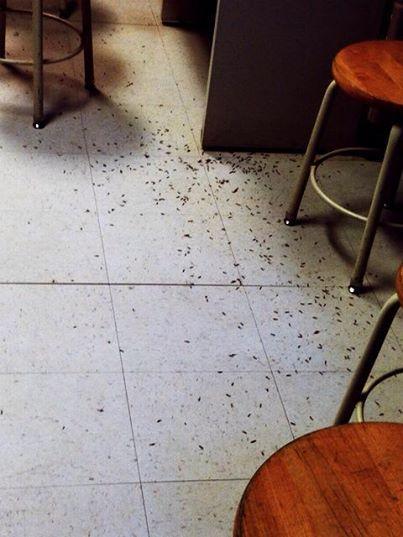 Photo: Thousands of termites emerged from a hole in the wall in Rm. 2 last Tuesday.

Photo: Thousands of termites emerged from a hole in the wall in Rm. 2 last Tuesday.

Students and teachers first noticed the termites in Rm. 2 during third period on Tuesday. Student teacher Michelle Steinberg had just finished teaching a demonstration when students saw the bugs at the perimeters of the room. "I noticed people weren't sitting down. The substitute teacher said there were bugs everywhere, so I went over to look. There were literally thousands on the floor, and they were coming out from a hole in the wall," Steinberg said.

Steinberg evacuated the room, and students went to the classroom next door while art teacher Jacqueline Armstead informed the main office of the situation. Fortunately, the termites were easily dealt with for the time being. "Termites have a very short lifespan, so they all just died. Building services came in to clean up the casualties, and an exterminator came by and deemed the class safe for inhabitation," Steinberg said.

Students had mixed reactions to the termites. "Some were really upset and some were like, 'Oh, this is cool.' Someone described it as apocalyptic," Steinberg said. Most students just didn't want to be near the bugs. "I've never seen an infestation like that before," senior Rujia Teng said. "They just kept coming out of the walls. We wanted to leave."

Classes were held in a different room until Friday. Despite the best efforts of the maintenance people, some remnants of the insects remained. "We could still be in the room, but there were wings everywhere," senior Jamie Matthews said.

Initially, some suspected the termites had come in through the door to the playground by the Child Development Center. "Our teacher thought they were from the mulch of the new playground," Matthews said. However, the exterminator did not think that theory was plausible. "That was not the case," Steinberg said. "The exterminator said it was a complete and total coincidence."

Instead, the exterminator suspects there is a termite infestation at Blair. "The exterminator thinks there might be a nest in the foundation of the school, but he's unsure," Steinberg said. If this is the case, a more thorough treatment for the infestation will occur over the summer. Regardless of the cause, the termites do not currently pose any hazard to students or teachers.