In celebration of the University of Maryland's (UMD) 150th anniversary dozens of decorated terrapin statues designed by students as part of the Fear the Turtle Project were installed in various locations throughout Maryland. 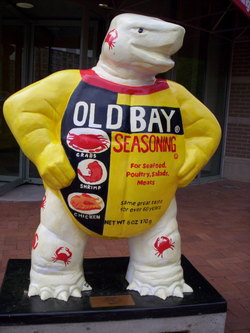 Photo: "Crab feast" by Jessica Brosch is located on the corner of Fenton and Wayne in Down Town Silver Spring.

Photo: "Crab feast" by Jessica Brosch is located on the corner of Fenton and Wayne in Down Town Silver Spring.

UMD launched the Fear the Turtle project with the assistance of numerous sponsors, including Chipotle and Phillip's Seafood. According to the project's website, the campaign is designed to show other schools that the University of Maryland "is now a collegiate force to reckon with by virtually every measure of quality."

The school invited artists who had a connection to the University of Maryland and an interest in art to participate in a design contest for the program. Winners of the contest were determined in Oct. 2005 and were given until the end of March to complete the design on the sculptures. Artists were given $1,000 each for supplies and materials.

Four of the fifty statues have been placed in Silver Spring, one at the intersection of Colesville and Georgia and another on the corner of Fenton St. and Wayne Ave. The other two, named "Art Terp" and "The Wisdom of Einstein," are located at the Silver Spring Regional Center and inside City Place, respectively. Other locations of the sculptures include McKeldin Library at UMD, College Park and Union Station in Washington DC.