Text-a-friend: the high-tech approach to cheating

Where only first names appear, names have been changed to protect the identities of sources.

During his Modern World History final exam last year, Mike, a senior, came to a difficult question. After mulling it over and failing to come up with the right answer, he decided to turn to text-messaging. Quietly, Mike put his head down on his desk and pretended to sleep while texting his friend the question under his desk. The friend texted the answer back to Mike, who quickly bubbled it in " all without the teacher noticing.

Mike and a number of other Blazers are following a growing global trend: On Dec. 10, 182 students in South Korea were indicted for using text-messaging to cheat on national college entrance exams, and in January 2003, six students at the University of Maryland admitted to doing the same thing. Because it is a relatively new phenomenon, text-message cheating goes unnoticed by unsuspecting teachers, making it especially appealing to students.

Quickly text-messaging a friend a problem and getting the answer is easy, says junior Steven Gomez. "You can't see anything or hear anything. It just vibrates," says Gomez, who claims to use text-messaging to cheat on every test he takes. 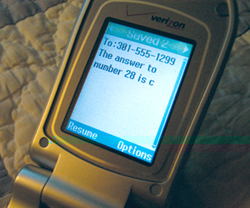 Rachel, a sophomore, thought of using her phone while taking a test when she was in need of a fast fact. "I was doing the test, and I got to question 10, and my friend had the class first period, so I texted the quote, and she texted the answer," she says. The teacher was at her desk and had no idea what was happening.

Gomez stores the numbers of students whom he can text-message so he can get an answer as quickly as possible. Sometimes, it's premeditated. "I'll ask my friends at the beginning of class, 'Hey, do you have your cell phone?' If they say 'yes,' I'll say, 'I'm going to text you,'" he says. Gomez has texted friends in the same classroom, friends in different classrooms and college students he knows. In every case, his teachers are oblivious to his actions. "They're usually grading papers," he says.

Teachers' ignorance of text-message cheating makes it even more tempting for students: In an informal Silver Chips poll of 19 teachers from different departments on Jan. 3 and Jan. 4, only two were aware that students use text-messaging to cheat. None have caught any students in the act.

Rachel feels that teachers are too inexperienced with technology to realize students would use it to their advantage. "They're not expecting [cheating] to be that high-tech. When they were in school, they didn't have cell phones. That's never going to cross their mind," she says.

Gomez agrees. "They don't understand technology," he says. "If you look at a teacher's cell phone, it's going to be an old piece of crap."

Assistant Principal Linda Wanner doesn't dispute this claim. "I don't think we're particularly wise in the ways of technology and its role in getting around academic ethics," she says. However, Wanner says that teachers can still pick up on all cheating methods by constantly monitoring students during tests.

While science teacher Caitlin Sullivan already does this, she has not seen any text-messagers. "I've never caught anyone doing it," she says.

Yet Gomez says that teachers won't catch text-message cheaters since cell phones are so small. "The teachers can't pay attention to it. It looks like a PDA [personal digital assistant]," he says, "so when it beeps, I just say my PDA went off."

But even with this newfound awareness, teachers will always be a step behind students who disregard the threat of out-of-school suspension for cheaters who are caught three times. "I think that they'll feel like it's out of their abilities just because if it's not text-messaging, it'll be something else," he says. "We're always going to find a way to get by."

Ravi Umarji. Ravi is finally a senior in the Magnet. All you need to know about Ravi is that he's a huge Redskins fan (which, until last year, wasn't exactly pleasant). Of course, he's predicting a Super Bowl season next year. His favorite athlete is Lance Armstrong, … More »