For Blazers, 2:10 p.m. is a rush of many things: end-of-the-day relief, hallway collisions, pizza orders and… sugar?

Yep. Every day without fail, a group of students bolts across University Boulevard, bending rules and braving cars to catch a little rest and relaxation. But these Blazers aren't rushing home to finish their Calc homework or take a cat nap. Rather, the hustle is Blair's own coffee rush, a caffeine-fueled race to order the tallest frapuccino that the local coffee joint has to offer.

As the school day ends, more Blazers are going to their local coffeehouse to get coffee, hang out or even open their binders for some homework. In addition to their habit-forming beverages, coffee shops such as the local Starbucks are trying to gear their stores towards providing a more comfortable work atmosphere. With new features like free internet access, a soft musical atmosphere and plump sofas, coffee shops give Blazers a reason to drop in. As many as 30 Blazers each day, one Starbucks employee estimates, are driven to this ritual by a near-dependence on caffeinated products to keep them awake or while looking for a quiet place to work. 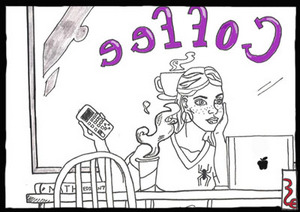 Junior Tara Schiraldi is a self-dubbed coffee addict, consuming at least two large, 20 ounce cups a day, which she recognizes as a habit to watch. "Coffee's really, really bad, but I still drink it. Plus, you get 'coffee breath'," she says. But Latte-breath or not, the coffee addiction has driven Schiraldi to stop at Starbucks several times a week. She says she needs the coffee to get through the school day, drinking a cup in the morning and often popping into Starbucks after school for a second round. "When I don't want to do homework or go home, I go to Starbucks instead," she says, sipping her "Venti white chocolate frapuccino."

According to the National Institute of Health (NIH), one cup of regular brewed coffee between 40 and 180 milligrams of caffeine. Depending on the consumer, this boost could be enough to enhance mental alertness as well and increase metabolic and physical responses for a couple of hours. Too much caffeine can have negative effects though, such as tremors, blurred vision and nausea, according to an NIH study.

Freshman Joseph Arce does not find this to be a concern. Despite the health risks involved with excessive caffeine consumption, he says that he visits Starbucks at least five times a month, and a lot more during the summer.

For Arce, going to Starbucks is all about the menu variety. "I go to Starbucks because of the drinks, I can always try something different," he says, adding that he spends several minutes poring over the menu before deciding to test a fruit-flavored tea, one of the over 20,000 possible drink combinations at Starbucks.

Though perhaps not tea-flavored, the coffeehouse experience for senior Colin Forhan is an important one. Instead of going for mind-accelerating beverages, he visits Savory, his local coffee shop, for the relaxation and concentration it offers him. "At home, I can always find a distraction from my homework," Forhan says. "If I actually sit down [in Savory] and intend to do work, I can do [the schoolwork] in two to three hours." Forhan says he visits Savory several times a month, especially when he has an important paper due the following day. He finds the atmosphere in the coffee shop "quiet and extremely helpful in getting [him] to concentrate."

The appeal of a coffee-house atmosphere extends beyond Blair Boulevard. For Blair alumni Emily Zobel, who now attends the University of Maryland College Park, Starbucks is a familiar study space and convenient rendezvous point. "It's really convenient. It's like when I say, 'Let's meet at the Starbucks at Four Corners,' everyone knows where it is," she says.

Zobel estimates that she spends at least several days a week studying with her classmates at coffee shops like Starbucks. Apart from the conducive atmosphere, she appreciates how considerate the employees there are. "They don't kick you out, even if you don't buy anything," Zobel says, "and the music isn't annoying."

Senior Hannika Bien-Aime spends more time than anyone she knows at Starbucks. She, however, does not hunt down coffee; she makes it. "Right after school ends, a lot of people come and just hang out," Bien-Aime says of her classmates. Before she started working at Starbucks, Bien-Aime was not partial to coffee or even visiting coffee shops. Now working three times a week, from 2:00 p.m. until closing, she finds the atmosphere and the coffee refreshing and the coffee shop "a good place to do some homework," especially when she is on break.

Coffee shops may offer a new place to finish that last equation on your math homework in peace, but for most Blazers, they remain simply a way to unwind and get something to drink, despite the dangers of, as Schraldi puts it, "coffee breath."