Looking at the former Siam

Photo:
Nipon Saisaard is a senior at Blair of Thai nationality. He was born in the Buriram province of Thailand and grew up in the country for majority of his life. When he was thirteen, Saisaard moved to Silver Spring. 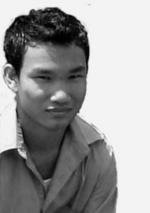 There's nothing different in being a Thai teenager, except that we might be more conservative because we are expected to be traditional and more concerned with the family. While I lived in my village, most kids were working in the fields in the rice paddies. If they aren't working, they can go play soccer but they mostly work. When I moved to Buriram, which is the city, kids had more free-time. It's kind of similar to how American kids go and hang-out. It is like night and day comparing Buriram to the villages. In the villages, kids are for working and helping the family. In the city, kids can be a little annoying.

Thai markets are mostly farmer's markets. It is more of an "I know you, you know me" kind of feel. It is more intimate, more homey. When you go there, they may ask, "How is your family?" instead of just, "That will be $17.75. Ring, ring. Thank you, have a nice day." It isn't as intimate here.

Schools here are easier than in Thailand because you have a lot of technology to help you, like TI-83 calculators. And almost everyone has a computer in their house. In a village of 10,000 people, maybe only five people might have a computer.

Every student has a uniform. Nationally, every public school has the same uniform. Private schools' uniforms are determined privately. The guys have to have a buzz cut. The girls have to have [their hair cut] to the bottom of your ears — you have to be able to see your pierced ears. We don't really obsess over what we have to wear everyday. They give you shorts or pants for summer and winter but mostly I just wore shorts all year because it doesn't really get cold.

Teachers are much more strict in Thailand — like correctional officers. They are really scary. When I came to America I was surprised. All the people [American students] where like, "Aw, the teachers are mean," and I said, "Oh, no they are not."

For school, home economics is a requirement in Thailand. I miss home economics class because I love to cook. You basically have to be able to live on your own. And you have to sign up for the National Scout Organization of Thailand. The boys are more in the field, out in the environment doing more hands-on things like camping and surviving in the wild. Basically, in sixth grade boys are required to go out and camp in the wild. We learn to live in a tent, build a fire and basically survive on our own. The girls are more conservative, in the classroom learning.

In Thailand my extracurricular activities would be doing things like performing traditional Thai dance. In Thailand, they have this sport called pra-gro (approximate translation) with a hard ball and a net, but you have to use your feet to kick the ball into the net. It is like volleyball for your feet. I don't play that though, because I have no coordination with my feet! They require you to take traditional Thai dance, and I liked doing it so I signed up for it. [Here in the States] I plan parties for friends and all that stuff. I'm a party planner. I am also helping out with a lot of the plays this year.

Thailand's rich and diverse culture began 2000 years ago when its earliest people, believed to have been the Mons, migrated from China to Southeast Asia. Once there, the Mons built a thriving civilization, which soon came under attack from similar groups emerging from northern regions. Following the new civilization's birth was a series of competing empires, which started the nation's ascent as an individual country.

The first Thai empires were the Davaravati and Srivijaya, but they succumbed to the influence of other expanding territories such as Cambodia. The next empire to gain power was the military-based Siam, whose name the country would adopt in later years. In 1220, Thai lords established the first capital of Sukhothai, followed by Lanna Thai in present day Chiang Mai and Ayuthaya near the modern capital of Bangkok.

In 1556, the neighboring country of Burma to the west captured Chianga Mai, followed by an attack on Ayuthaya in 1569. In the following decades, the Thai people were able to reclaim the two cities, and even rebuild Ayuthaya after a gruesome battle in 1767 which left the city close to ruin. Under the rule of Rama I, whose decedents reigned today, the Burmese were expelled and a new capital, known as Bangkok, was built. It marked the country's ascent as a sovereign nation.

For most of its history, Thailand remained detached from the pressure of foreign expansion into Southeast Asia. The Thai kings maintained the country independent and while developing their own culture without the overwhelming influence of competing European nations.

Siam's monarchy became constitutional after a peaceful coup in 1932. Seven years later, the country changed its name to Thailand. For the next several decades, Thailand engaged in various wars under the military dictatorships of its government and endured many conflicts before finally settling into the stable and economically successful nation of today.

Language
The national language is Thai, primarily spoken by the majority of the population. The language borrows extended vocabulary from Sanskrit, Khmer, and Pali. English is taught in the public school systems and understood by most people in major cities like Bangkok. Other than Thai and English, principal languages like Chinese and Malay are used by a very small percent of citizens.

Religion
Theravada Buddhism is practiced by 95% of the population. Thailand is not a religious state, which means there is religious freedom to practice any religion.

National Anthem
Here is a site with the national anthem, flag and symbol.