"Thank You for Smoking" is a sharp-tongued masterpiece

"Thank You for Smoking," the break-out hit from this year's Sundance Film Festival, is one of the best satires made in years.

Nick Naylor (Aaron Eckhart) is Big Tobacco's chief spokesman. He has what may be considered the hardest job possible: convince people that cigarettes aren't harmful. 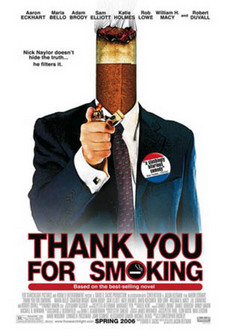 thank you for smoking

Naylor has a way with words and manages to spin any argument anyone shoots at him. His gift for gab is so polished that he manages to use a young boy who got cancer from cigarettes to the benefit of Big Tobacco on a talk show, much to the chagrin of the anti-tobacco groups who had brought the boy to prove tobacco's harmful effects. Before any of them can blink, he's exchanging high fives with the boy and proclaiming that Big Tobacco doesn't want its customers to die, but the anti-tobacco lobbyists clearly do because it gives proof to their cause.

The film is full of similarly dark humor. Naylor regularly convenes with his two best friends, Polly Bailey (Maria Bello) and Bobby Jay Bliss (David Koechner), who spin for the alcohol and firearms industries, respectively, to brag about the number of deaths their products cause. They call themselves the MOD (Merchants of Death) Squad and trade stories and tips on how to avoid nosy reporters and bleeding-heart liberals set on destroying their industries.

Naylor defends cigarettes while trying to be a role model to his young son Joey (Cameron Bright). Naylor takes Joey along on business trips —including a hilarious one to Hollywood where Naylor meets with an agent about putting cigarettes in a new movie — and teaches him the art of argument. Naylor doesn't want to teach his son that cigarettes are cool. He just wants to give him tips on how being able to think quickly works to your advantage.

The movie is not snarky or mean-spirited. Everyone, from the bogus Academy of Tobacco Studies to the self-important Senator Finistirre (William H. Macy), who is on a campaign to get a skull and crossbones put on every package of cigarettes, takes their fair share of hits in the film.

Though Naylor represents a pretty immoral industry, he isn't a bad guy. Eckhart's character is never mean or arrogant; he plays Naylor with a quick silver tongue and a slight wink to let you know that he doesn't take this guy very seriously, that Naylor wouldn't take himself that seriously. He's just along for the ride, and half of the fun is seeing the way he spins what should be hard facts. You're almost rooting for Big Tobacco and Naylor to spin themselves out of trouble.

"Thank You for Smoking" is about more than cigarettes — it's about spin and lobbying in general. Naylor may be using the facts to his advantage, but so do lobbyists on all sorts of campaigns. Numbers don't lie, we are reminded, but people do.

Naylor doesn't lie, per se. He just bends the truth, and it's a whole lot of fun to watch.

"Thank You for Smoking" (92 minutes) is rated R for language and some sexual content.