It's Thursday night. Your family is gathered around a table, smiling and chatting, and the food smells marvelous. The table is set with steaming sweet potatoes, bowls of stuffing, a glistening golden turkey, and in the center of the table is your old family menorah, candles cheerfully flickering. That Thanksgivukkah spirit is in the air.

This probably doesn't sound familiar. Thanksgiving is always reserved for November, and Hannukah is usually sometime in mid to late December. The two holidays are typically weeks apart. But this year, for the first time in more than a hundred years, Thanksgiving falls on the first full night of Hannukah.

Or, rather, the second night of Hannukah falls on Thanksgiving, because of the way the Jewish calendar works. The Jewish calendar is based on the cycles of the moon instead of the sun, which means that it has shorter months and even a leap month every few years. The months therefore don't start or end on the same days as those of the Gregorian calendar that we use, and their New Year is sometime around September. So Hanukkah is always on the same date, but only according to the Jewish calendar, on the 25th of Kislev. According to the much more widely used Gregorian calendar, Hanukkah jumps around, sometimes on Christmas, sometimes in early December, and, sometimes in November. This means that it's rare enough Thanksgiving falls on Hannukah at all, but even rarer that Thanksgiving falls exactly on the first full day of Hanukkah. So rare, in fact, that Thanksgivukkah won't happen again for 70,000 years. 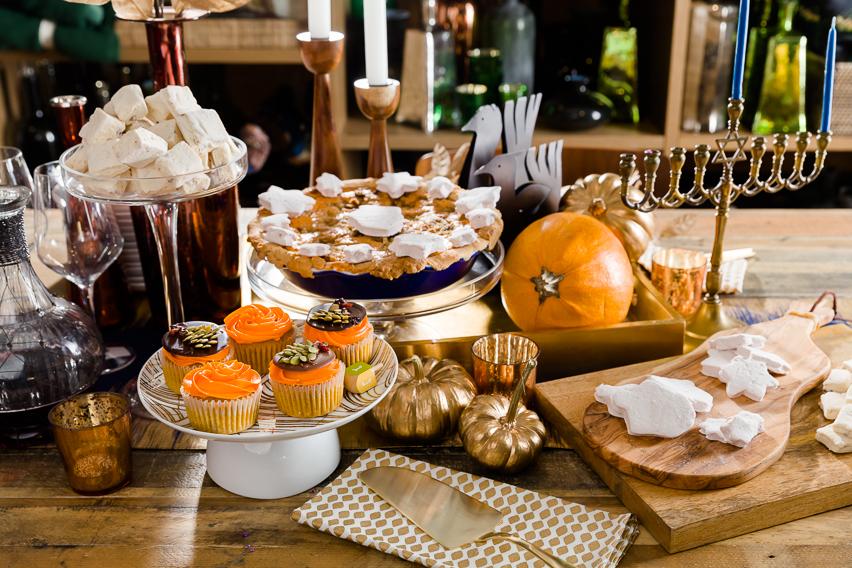 Photo: Jewish American families celebrated a combination of Hanukkah and Thanksgiving with mixed traditions and lots of food.

Photo: Jewish American families celebrated a combination of Hanukkah and Thanksgiving with mixed traditions and lots of food.

What does this mean for Jewish Americans? Relatively little, says Jewish Culture Club sponsor Marc Grossman. "Hannukah is a Jewish holiday never mentioned in the Jewish Bible," Grossman explains. "Because it's not biblical, it's pretty loose in terms of how you celebrate it."

According to Grossman, some kind of Hannukah/Thanksgiving fusion may not be much of a stretch for Jews. Giving thanks is already a fundamental part of Judaism, woven throughout the Torah—the Jewish holy book—in their prayers, and in many other stories. "All the prayers are about giving thanks for lots of the things we have in life. That whole concept is one that is very much embraced by tradition," Grossman says.

Jewish Blazers are divided about their approach to the holidays this winter. Some, like junior Rachel Sobey-Strick and her family, have decided to postpone Hanukkah celebrations briefly to experience the full effect of Thanksgiving. She felt it was the best option, even if it was not ideal. "I'm a little bit disappointed," she admits, "because we're missing Hannukah, but Thanksgiving happens once, while Hannukah happens for eight nights, so if you have to choose, you would choose the one that happens once."

Other Blazers seem unconcerned about the combination of Hannukah and Thanksgiving. Sophomore Nesha Ruther felt optimistic about her family's holiday amalgam. She admits the situation could be tricky, but confidently says that everything could go very well, at least "if it's handled the right way."

The most prominent way that Jewish people seem to be combining Thanksgiving and Hannukah is in that ever-important Jewish tradition: food. Food is very important to both holidays, and food is certainly important to freshman Naveh Berner-Kadish. Berner-Kadish was very excited for his meal that included a wide variety of both traditional Hannukah and Thanksgiving dishes] "Good food plus better food," he descibes with a grin.

Across the country, Jewish Americans have worked together to brainstorm a host of new and interesting food mash-ups, including mashed potato latkes, Challah stuffing and Latke Pumpkin pie. With or without these mashups, Thanksgiving will be filled with great food.

Thanksgiving, unlike many other holidays, is not religious. It's American, so a great variety of people can celebrate it, regardless of their beliefs or background. "Even the most orthodox Jews celebrate Thanksgiving," agrees Grossman. It's simply a good opportunity to spend time with family and friends. So whether you decided to postpone the dreidel-playing or you ate turkey alongside latkes, Thanksgiving is a great time to give thanks for the things that are most important.