Even if you're not a fan of the corporate music world, the annual Grammy awards are always worth a peek - there's always some amazing dress that shows up three weeks later on the pages of Vogue, or some flustered musician who gives a touching thank-you speech. This year's festivities didn't dissapoint - held for the 49th time this year at the Staples Center in Los Angeles, California, the Grammy's presented a Mecca of the hottest new rising stars and the latest glamour, glitz, and fashions that Hollywood has to offer.

From old stand-bys (like Shakira's predictably bare midriff) to new surprises (see Imogen Heap's hair) the Grammy's this year were full of exciting stage moments that will probably go down in YouTube history. Some highlights:

Photo: The Dixie Chicks took home a Grammy for each of their nominations during this year's Grammy Awards.

Photo: The Dixie Chicks took home a Grammy for each of their nominations during this year's Grammy Awards.

"Ladies and Gentlemen, we're The Police and we're back."
The program opened with the long-awaited reconciliation of The Police, who have re-established as a band almost a quarter-century after the release of their last album. Fronted by Sting, the group started the ceremony by launching into their chart-topping 1978 single 'Roxanne,' which received fair applause from the crowded theatre.

The Magnificent Mary J.
Things got off to a surprising start when R&B artist Mary J. Blige swooped the Grammy for best R&B song, best female R&B performance and best R&B album. A surprised Blige, who had contended for the best album title against the likes of Prince and Jamie Foxx, thanked everyone she possibly could at the podium (according to a BBC Grammy report she rambled off nearly fifty names) and left still in shock when the formidable timing music began. Blige appeared on stage several more times throughout the rest of the evening, but most notable was her powerful solo rendition of her mega-hit winning song, "Be Without You."

Trios of talent: Artist collaborations bridging genres and generations
This year's Grammy's also introduced a funky new fusion style of performance: over the course of the evening, contemporary stars John Mayer, Corinne Bailey Ray and John Legend performed a medley of their own songs together, and Smokey Robinson, Lionel Richie and Chris Brown demonstrated the shift in soul music over the years with a collaboration piece. These group efforts were touching and interesting â€” Ray, Mayer and Legend effectively segued from Ray's melodic hit "Like a Star," into Legend's soft tune, "Coming Home," and again into Mayer's "Gravity." This technique allowed each artist to showcase their different capabilities within their genre, and brought a little spice to the formerly textbook presentations.

Plus, an aging Smokey Robinson managed to prove that he still has rhythm, with a heart-rending performance of "The Tracks of My Tears."

Gnarls the Gnarly
For each performance, alternative urban pop duo Gnarls Barkley dress in a new costume (past favorites have ranged from Star Wars characters to Greek Gods) and tonight, Danger Mouse and front-man Cee-Lo did not disappoint. The band appeared as military pilot personnel, playing their massively popular hit single 'Crazy,' to a depressed drumbeat. As much overplay as 'Crazy,' has seen, the performance was excellent and well-timed â€” but this didn't stop Gnarls from losing the album of the year award to the Dixie Chicks.

Bringin' Sexy Back...to the internet
A tastefully clad Justin Timberlake appeared several times during the night's events to perform hits from his new album, FutureSexLoveSounds. Most notably, Timberlake took a spot at the piano to play a touching rendition of his song "What Goes Around," accompanied by a trio of elegant back-up singers and a band. The performance was going well until Timberlake whipped out a webcam and began filming himself as he sung into the microphone -- it seems vain to ask for even more camera coverage, J.T. 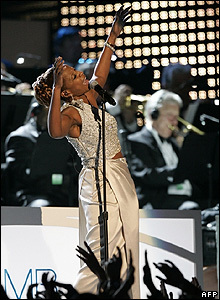 Photo: Soul star Mary J Blige won three awards, including best R&B song for Be Without You, which she performed at the ceremony.

Photo: Soul star Mary J Blige won three awards, including best R&B song for Be Without You, which she performed at the ceremony.

It's snowing in L.A!
Having laid low for most of the night, the Red Hot Chili Peppers finished off the Grammy's with an elegant performance of their hit "Hey Oh (Snow)" off their new album Stadium Arcadium. John Frusciante - with an alarmingly short new haircut - opened the song with the appealing opening riff, and coupled with Anthony Kiedis' buttery vocals and Flea's mellow bass line, the band delivered a solid performance. More shockingly, at the beginning of the chorus, confetti-like flakes of snow began to fall from the arena's roof onto the crowds below. The Peppers won best rock album for Stadium Arcadium, but were jilted for best album by the Dixie Chicks, who swooped the votes yet again.

I'm Crazy for...country?
If the 48th annual Grammy's managed to reveal any sweeping trend in the face of contemporary music, it was that country is back with a vengeance. The Dixie Chicks, bouncing back surprisingly well from their recent career-killing rag against the Bush administration, collected most of the night's main awards - by the end of the ceremony, they practically needed a wheelbarrow. Also, newcomer country singer Carrie Underwood (of American Idol fame) won the best new artist Grammy over Corinne Bailey Ray, Imogen Heap, James Blunt and Chris Brown. A twenty minute long countrified tribute to The Eagles in the middle of the ceremony starring Racal Flatts and Carrie Underwood effectively marked this not-so-subtle transition: it looks like hello, goodbye for all those other l'il genres.

Also worth some mention was Christina Aguilera's writhing-on-the-floor solo of James Browns' "It's a Man's Man's Man's World," Shakira and Wyclef Jean's dance rendition of "Hips Don't Lie," a tap-dancing tribute to James Brown and Ok GO's arrival on the red carpet...dressed as wallpaper.

Over all, this year's Grammy awards brought with them a series of elegant performances and surprising new shifts in the contemporary music dynamic of this decade - just keep a look out for when country music stages it's world domination plan and be ready to do-si-do.

Record of the year
Winner: Dixie Chicks - Not Ready To Make Nice

Song of the year
Winner: Dixie Chicks - Not Ready To Make Nice