There was a time when college credits were earned…in college. But that time is over. With the next two weeks dedicated solely to Advanced Placement (AP) testing, a significant chunk of Blair's student population is away taking a test with the hope of receiving college credit. Thus, the madness ensues. 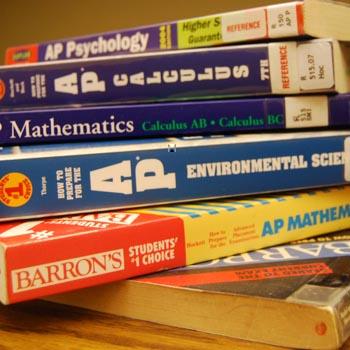 Photo: Students spend hundreds of dollars to take AP tests in addition to the money spent on other studying aids.

Photo: Students spend hundreds of dollars to take AP tests in addition to the money spent on other studying aids.

AP tests are designed by College Board, the same organization that makes the SAT and PSAT. The tests are created for students in AP classes, which are college level classes taken in a high school setting. AP offers 34 unique tests, ranging from Music Theory to Calculus. But what if your school doesn't offer one of these courses? Increasingly students are self-studying, not taking classes in subjects that they've already mastered or that are unavailable at their school but instead learning the material on their own to take the AP exam. Students can end up taking upwards of six of these tests, at a cost not just to their wallets but to their education.

Self-studying is nothing new. More often than not, it's a student's method for final exams or the SAT. But to self-study without having taken a class is an entirely different matter. Not taking a class means a student misses out on the classroom feel, the direction of the teacher and the learning experience. The open discussion and exchange of ideas that are created in a class filled with other students are completely remiss. People spend months applying to schools for classes that students can "pass" in three hours on a Tuesday morning.

Another disconcerting factor about AP tests is the amount of money being spent. At $87 a pop, the cost of multiple APs tests can easily approach the price of a new laptop. Though a couple hundred dollars is a highway robbery compared to the hundreds of thousands of dollars that are likely to be spent on a college education, in reality APs are not all they are made out to be. Though they do provide college credit at many schools, they are in the form of elective credits, meaning that every AP class, be it Chinese or Studio Art, is given the same worth, no further increasing a student's quest for a degree in a certain subject. In other cases, the class counts for nothing, serving only to accelerate the student to the next tier by excusing them from the entry level class in college. If the class will end up counting for nothing and a brief college placement test proves a student has learned the same thing, are APs really necessary at all? When the class is given full credit in its broader subject, for example, fulfilling a science credit with AP Chemistry, students can be pushed ahead to skip whole grades and enter college already with the credits of a sophomore. But like in the issue of self-studying, it is important to keep in mind what the student might be missing out on by advancing, perhaps too far, with AP classes.

Almost the opposite of the college before college phenomenon is the strategy of overloading on AP tests to avoid taking final exams. Particularly for sophomores and juniors who want to stop going to school as early in June as possible, APs are an easy excuse out. No matter the score on the AP, which isn't received by students until the third week in July, students who choose to take the AP for their class are given automatic exemption from finals. Students are willing to shell out nearly $100 to pay for what could potentially be the difference between passing or failing, if a student runs the risk of failing a final exam.

When we get down to the heart of the matter, APs are just another form of tracking, putting some students on the path to a quicker college graduation, and allowing others to slide by, taking the tests as a means to pass a class. Maybe by eliminating the test and alleviating the pressures to receive fours or fives, the American education system would be a step closer to leveling the playing field.