The art of the sport

Kicks fly high. Flyers soar in the air. Girls jump and move across the court with energy, beaming with smiles as wide as the poms they clutch in their hands. Many doubt that girls in skirts and smiles can participate in hard-core athletics, and the job is a lot harder than it looks. The energy exuding from their spirited movements inspires Blazer fans to cheer and applaud with enthusiasm. Some scoff at the thought that their "art" could be classified as a "real" sport. But considering the talent, effort and athleticism necessary for our performances, these two "art" forms are just as demanding as other Blair sports. 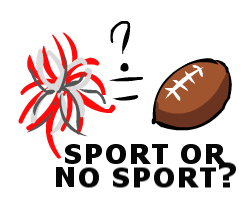 While some sports teams put only certain players on the field or court at one time, poms and cheerleading squad performances require that all members participate at once. This means that each individual girl is expected to deliver an entertaining performance with full energy for the entire routine. While other team sports allow players to transfer responsibility from one player to another by passing a ball, every individual pom and cheerleader is expected to hold our own during the entire performance.

While there is no direct man-on-man contact like in most sports, the competition for poms and cheerleading is just as intense. Girls are expected to perform constantly, enthusiastically and flawlessly for a set period of time in front of critical judges. Any slight misstep or wrong move is severely critiqued and points are deducted.

Cheerleading has been identified as the most dangerous sport for high school females - lifting and throwing teammates into the air. Flyers can fall from high heights and receive injuries that have the potential to be extremely serious. Other sports are also tough: football players tackle, ice hockey players brawl and lacrosse players are extremely physical. But these sports allow players to don extensive padding for protection; cheerleaders are expected to perform in skirts.

This is not to say that cheerleading or poms is more intense than male varsity sports, because that is probably not the case. It is simply that we may have an equal potential for injury.

There is also more to poms and cheerleading than meets the eye. Cheerleaders do not only applaud other sports teams; they do step routines within their cheers, tumbling and lifting girls with their own brute strength. Poms dances require flexibility, knowledge of a variety of dance styles and the energy to do a high-energy routine without stopping for breath. And both teams do it with brilliant smiles and charming facial expressions that make the demanding routines look like a piece of cake.

Because of this performance aspect, some claim poms and cheerleading are an "art," not a sport. Perhaps this is because the girls are able to execute their athletic movements with grace and charm, but that does not immediately indicate that their athletic capabilities do not merit a "sport" title. The ability to perform high-energy routines with a smile does not translate to only an "art."

Although their responsibilities do not correspond with those of more "conventional" sports teams, cheerleaders and poms work just as hard to perform for their supporters, and even take on another job: keeping their fans energized and enthused. We win, lose and work up a sweat just like all the other sports players. It's just that, for us, halftime is game time.