Silver Chips Online is here to tell you who's good, who's new and which games to watch

The 2010 FIFA World Cup begins on Friday, June 11, and South Africa will be the first African country to host a World Cup tournament. With countries representing North, South and Central America as well as Africa, Europe and Asia, it is likely that Blair's student body has ties to every one of the 32 countries competing in this historic soccer tournament. For those interested in watching the games or just watching the players, the FIFA World Cup 2010 is bound to be an exciting and fun way to celebrate the beginning of summer.

Photo: South Africa will be the first African nation in history to host a World Cup.

Photo: South Africa will be the first African nation in history to host a World Cup.

The tournament begins with a faceoff between South Africa and Mexico on June 11 at 10 a.m. While no host team in World Cup history has ever failed to advance beyond the first round of matches, this is an unfortunate possibility for South Africa. In the country's two previous World Cup appearances, they did not advance beyond the first grouping, but the possibility of poor performance is not hindering enthusiasm from passionate fans. The opening game will be an exciting and long-awaited first World Cup game in Africa, but will also be a huge nail-biter in seeing whether South Africa advances in the tournament. Watch out for Aaron Mokoena, Steven Pienaar and Benni McCarthy, South Africa's strongest and only well-known players. The other members of Group A are Mexico, Uruguay and France.

Spain
Adequately nicknamed, La Furia Roja will consist of the same players that won the Euro 2008. A broadly talented group of players includes goalie Iker Casillas and forwards Fernando Torres and David Villa. Torres's speed and outstanding scoring ability and Villa's intuition make the team a major contender for the Cup. A team that has already achieved an international victory is bound to go far this summer.

Photo: Fan-favorite Kaka heads up this talented team of Brazilians.

Photo: Fan-favorite Kaka heads up this talented team of Brazilians.

Brazil, as usual, is expected to have a very good chance of winning the Cup this year. The Brazilians are under the new management of former World Cup player Dunga, who has honed their skills and will organize the players around a strong offense. That being said, they also must get past Drogba's Ivory Coast, Ronaldo's Portugal and North Korea in Group G, referred to as the "death group."

Argentina
Argentina has talent in star players, but they must maintain cohesive team dynamics to go far in this tournament. They are armed with midfielder Lionel Messi, 2010's FIFA World Player of the Year. Having scored 43 goals for club team Barcelona in the 2009-2010 season, he is going to be a critical asset to the team and will be very entertaining to watch. While Argentina is a reputed strong team, it has not won a World Cup since 1986; unless they work to overcome shaky performances in qualifying matches, their losing streak is likely to continue.

Ivory Coast
This is Ivory Coast's second World Cup, but for such an inexperienced team, they are very strong across the field and lack any significant weaknesses. They are expected to repeat their success in the 2006 World Cup, in which they were the only team to score goals in every game they played. Though Les Elephants were eliminated early on in 2006, with a "home continent" advantage and the support of African fans, Ivory Coast have the potential to go much farther. The major obstacle to the Ivory Coast is their placement in the "group of death."

Serbia
Competing for the first time as an independent nation, Serbia has a chance to do very well this year. In past World Cups they have competed as Yugoslavia or Serbia and Montenegro, but this new identity will boost team spirit. Nemanja Vidic of Manchester United is one of the best defenders in the world, known for his ruthlessness and aggression on the field. Their strong defense is balanced by experienced midfielder and captain, Dejan Stankovic. Although they are strong enough to pose a threat in the tournament, they must first come through a difficult first round of games against Ghana, Germany and Australia.

Best games of week one

Photo: England faces off with the U.S. in a highly-anticipated match on Saturday.

Photo: England faces off with the U.S. in a highly-anticipated match on Saturday.

The first week of the World Cup is both exciting and crucial, as it will decide the tournament's true contenders. The number of matches played in the first week resembles the first days of NCAA March Madness, only now the entire world is watching. Here are some games that that are going to be great to watch!

England vs. U.S.
June 12, 1:30 p.m.
The opening matches of the World Cup are always a must-see, but as the first game for the Americans and their foes across the pond, this is going to be huge. The U.S. has a considerable amount of talent with the likes of Clint Dempsey and Landon Donovan - as well as a lot to prove. As for the Brits, Wayne Rooney and the rest of England are hungry for their first World Cup win since 1966.

Brazil vs. North Korea
June 15, 2:30 p.m.
This will be the first World Cup game for North Korea in 44 years and is against the five-time World Cup winner, Brazil – a match-up that you don't want to miss. Soccer teams often reflect the national personalities of their societies, and it is hard to imagine a greater contrast than the representatives of the Hermit Kingdom and the Samba Sensations. 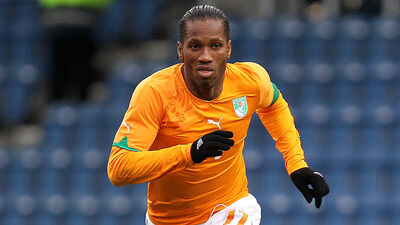 Photo: Ivory Coast's star player and 2009's African Footballer of the Year sustained a broken arm earlier this week; his play in Les Elephants' opening match is still in question.

Photo: Ivory Coast's star player and 2009's African Footballer of the Year sustained a broken arm earlier this week; his play in Les Elephants' opening match is still in question.

June 15, 10:00 a.m.
This game will be critical for both teams in qualifying for the next round. Since it is widely expected that Brazil will move on and North Korea will be eliminated, this game will determine which team can qualify for the next round to compete with, presumably, Brazil. Expectations from Africans are high as Ivory Coast is expected to perform the best of all of the African teams. This game will be intense as energy and emotions run high for both squads.

France vs. Mexico
June 17, 2:00 p.m.
Les Blues are a traditionally tough team who, in their 13 appearances, have reached the championship game twice. It will be interesting to see solid France go head to head with Mexico, one of the world's most stalwart teams, in their 14th appearance.

You've heard what Silver Chips Online has to say, now enjoy and have fun watching this historic tournament in between naps, trips to the pool and other well-deserved summer relaxations. Remember: no game is ever decided before it's played. No matter what's predicted, teams will always pull through or fall short, surprise fans and make history. It is bound to be an exciting battle along the way!