The Blair Boogie: No one's thankful for this auto-tune

Just when you thought the era of tweens producing viral videos of meaningless songs was over, Nicole Westbrook comes along with her single "It's Thanksgiving." 12-year-old Westbrook sings and raps the joys of Turkey Day as she hosts a Thanksgiving potluck with other tweens and a middle-aged wannabe-Usher.

"It's Thanksgiving" has multiple parallels to Rebecca Black's "Friday" with a catchy tune, overly simplified lyrics, cheesy rapping and negative reception. It's no surprise that "It's Thanksgiving" was produced by Ark Music Factory, which also produced "Friday." However, unlike "Friday," a timeless song that can easily be remembered every Friday, "It's Thanksgiving" will likely be forgotten after the holidays.

Photo: Nicole Westbrook and Patrice Wilson sing and rap in the "It's Thanksgiving" music video.

Photo: Nicole Westbrook and Patrice Wilson sing and rap in the "It's Thanksgiving" music video.

The "It's Thanksgiving" music video starts off similarly to "Friday" with some cheesy "oohs" and "yeahs" and a calendar marking down days until Thanksgiving. However, on Westbrook's calendar, Thanksgiving is on November 28th. Last time we checked, Thanksgiving was yesterday, November 22nd. Apparently this was produced in the future? What a great glimpse into the success of the music industry for the coming year!

After marking off Thanksgiving Day on her futuristic calendar, Westbrook goes on to educate the public about what holidays correspond with what months, "December was Christmas / January was New Year / April was Easter / And the 4th of July, but now it's Thanksgiving." Thanks for gracing the public with such ingenious lyrics. It's so great that there are people like Westbrook and Black to teach us about the months and the days of the week.

Westbrook continues her wonderful lyrics with "We we we are gonna have a good time / With a turkey, aye!/ Mashed potatoes, aye!" while cooking alone in her house. Where is the adult supervision as she cooks and invites her friends over for dinner? Oh wait, never mind, Patrice Wilson pops up to rap and also invites himself over to her house while wearing a turkey costume. If the middle-aged man looks familiar, it's probably because he was the same man rapping and driving in "Friday." Interesting to note, Patrice Wilson is a co-founder of Ark Music Factory, which produced both "It's Thanksgiving" and "Friday."

But wait! Westbrook takes a leap of faith when she believes that she too can rap. How can someone resist lyrics as golden as "Can't be hateful, gotta be grateful / Gotta be grateful, can't be hateful / Mash potatoes on my--on my table / I got ribs smelling up my neighbor's cribs / Can't deny / Havin' good times / We'd be laughing till we cry?" Oh, Westbrook, we're already crying.

Besides the lyrics, the video itself has many conflicts. 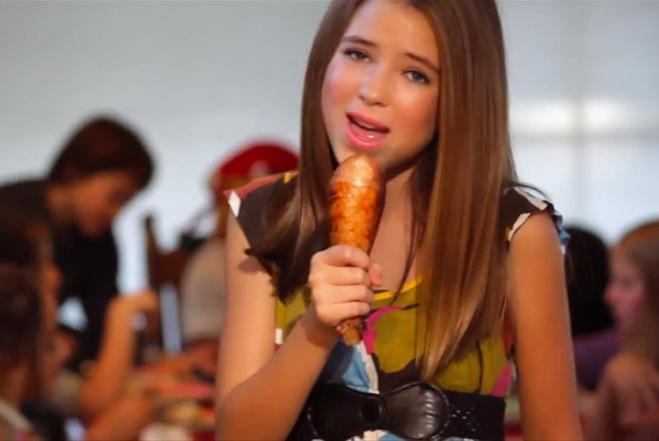 Photo: Nicole Wesbrook's music video for her single "It's Thanksgiving" has gone viral.

Photo: Nicole Wesbrook's music video for her single "It's Thanksgiving" has gone viral.

Some editing choices make the music video a hilarious hot mess. There are just so many questions that come to mind while watching this video. At one point, Westbrook takes a turkey leg and uses it as a microphone. Why is she singing into a turkey leg? Oh, yes, because using a turkey leg is clearly more sanitary and useful than using a real microphone.

But let's not be blinded by the stupid lyrics and editing choices because there is actually an underlying dark story behind "It's Thanksgiving." Westbrook's family is obviously wealthy because she's living in a large upscale house. But don't mistake her nice house, smiles and friends for a perfect and happy life. Clearly she's struggling on the inside. She and her parents must have little relationship seeing as she is left to celebrate Thanksgiving alone and cook by herself. However, she manages well. While many adults struggle to prepare a perfect turkey, Westbrook happily shows off her golden brown delicacy.

When she starts rapping, her hardships become clearer. Already judged by her only black friend when she gives Westbrook a condescending look, she faces the struggle of being a white rapper in the industry. All right, she's no Eminem, but with some luck and the right record labels, she just might be making it big in the next couple years.

Her new upcoming career opportunities aside, Westbrook's out of luck if she's looking for a positive review for her first single. We can't be "forgiving giving giving" about this song.

However, some good did come out of this song by teaching us a valuable lesson. If anyone is looking for YouTube stardom, here's a suggestion: use auto-tune, sing cheesy lyrics into a candy cane and have a middle-aged black man rap in the music video. An easy way to get famous by the time Christmas rolls around.