The Blazers clinch a win against the Wheaton Knights

Despite a rocky start, the Blair girls soccer team ended the game strong with a 5-2 victory 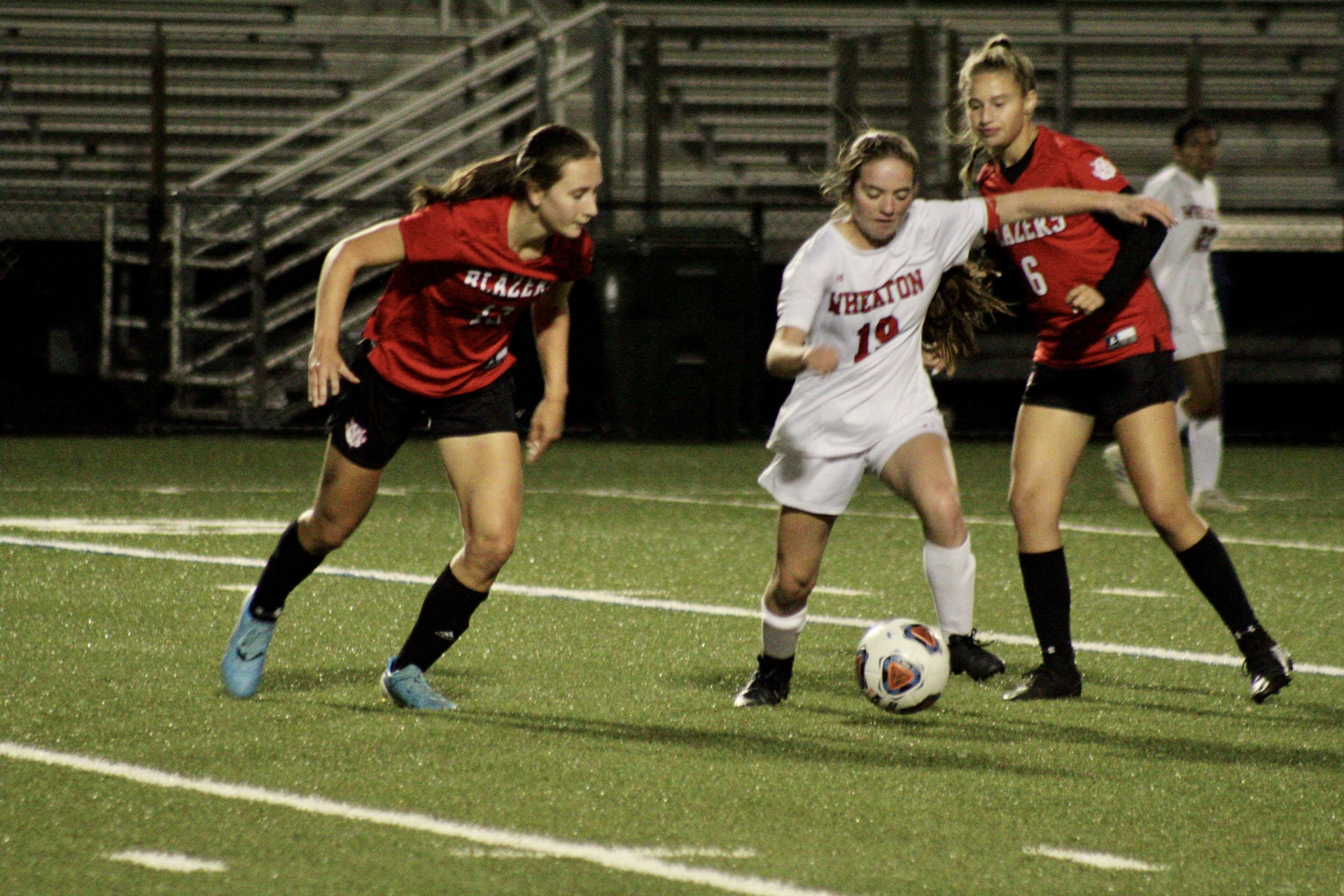 Photo: The Blazers started off slowly, only scoring once in the first half but managed to shut down the Wheaton offense.

Photo: The Blazers started off slowly, only scoring once in the first half but managed to shut down the Wheaton offense. Photo courtesy of Sadie Blain and Jonas Laufer.

The Blazer’s started the game by maintaining structured spacing while the Knights were fairly sloppy and uncoordinated. Wheaton’s lack of offensive pressure allowed the Blair defense to shut down most offensive pushes quickly. One out of Wheaton’s many first-half attempts crept past the Blazer defense, but each chance was saved by Blair goalie Alegria Martins.

Blair’s passing also seemed to be improving this game. A third of the way into the first half, Blair junior Beatriz Da Silva passed to junior Galya Diamond-Berman who passed it downfield to junior Elena Fernandez. Once in possession of the ball, Fernandez let fly a powerful shot past Wheaton’s goalie, bringing the score to 1-0.

Unfortunately, Blair’s offense seemed to lose its steam after Fernandez's goal. The ball mostly stayed in the middle of the field as the Blazers and Knights struggled for possession. Eventually, Blair was able to mount a push and attempted to score, but Wheaton’s goalie saved the ball, extinguishing the chance.

The rest of the half consisted of similar back and forth, concluding with the Blazers up 1-0. 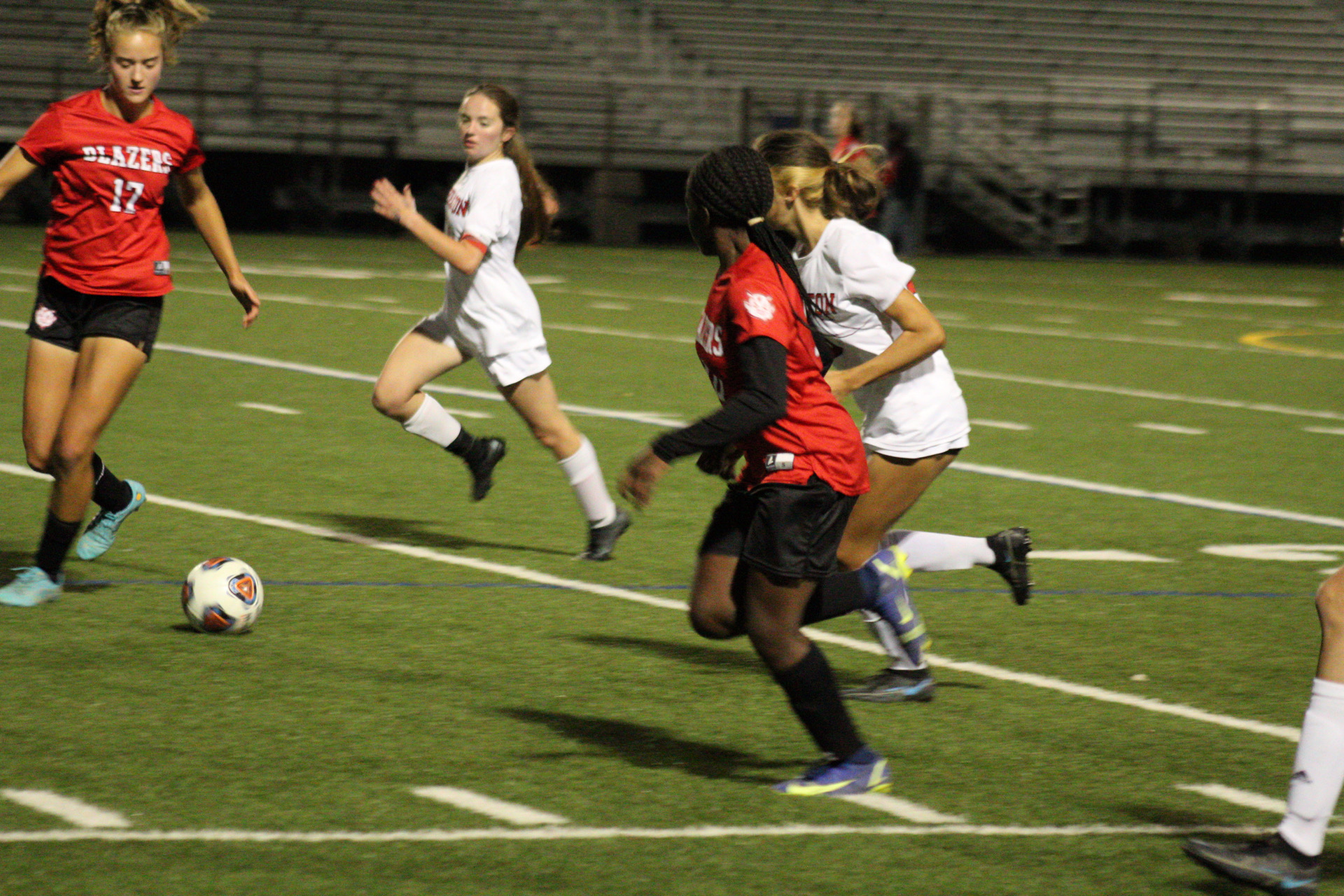 Photo: Junior Sally Peyrebrune receives the ball while the Blazers mount an offense.

Reflecting on the first half, Blair head coach Robert Gibb wishes that Blair’s offense had clicked a bit earlier. “It’d have been nicer to get two or three in the first half so we [could] kind of relax a little bit.” he said. Blair entered the second half with a meager one point lead, and with forty minutes left of game time, it was impossible to predict how it might turn out.

In the second half, Blair’s teamwork was vastly improved but players from both teams clumped, fighting for the ball, leading to the trampling of multiple players. The teams scrambled in the middle of the field for quite some time, but eventually Blair broke away, and Freshman Meron Koro scored, giving the Blazer’s a more comfortable lead of two points, 2-0.

Blair’s defense moved the ball back up the field after Wheaton's kick off, and after maneuvering around Wheaton defenders, attempted to score only for the ball to be saved by Wheaton’s goalie.

As soon as Wheaton gained power over the ball again, they pushed forward. Unfortunately, this time the Blazer defense gave way as the Knights were able to slip past Blair's defenders, leading to Wheaton’s first goal of the game. Blair’s comfortable two-goal lead was gone and the score was brought to 2-1.

Little happened on the field up until the last ten minutes of the game. The uneventfulness was broken by a sudden Blair offensive push, as Koro pushed past Wheaton defense and scored giving the Blazer’s back their two point lead, moving the score to 3-1. 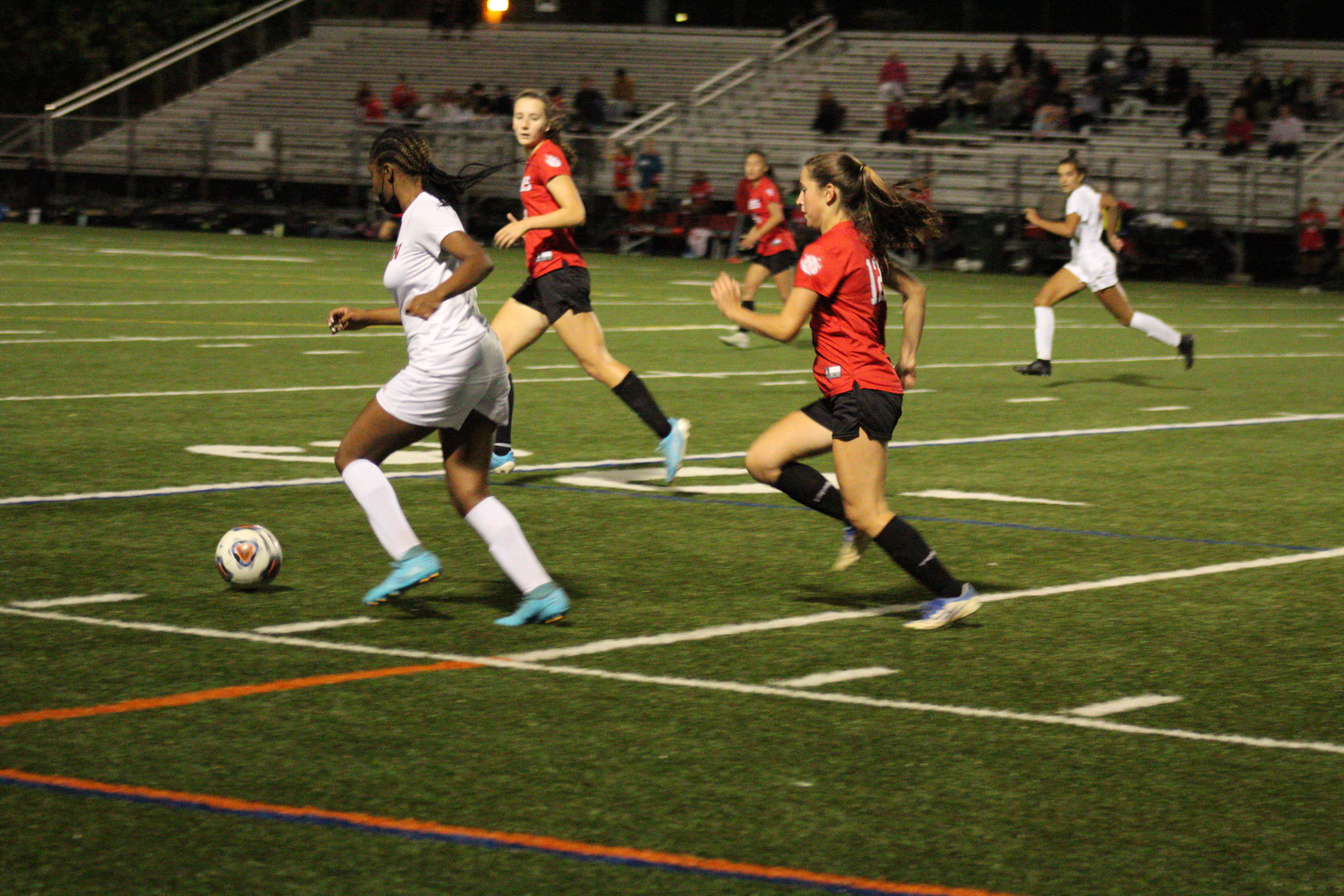 Wheaton quickly retaliated with a goal of their own a couple minutes later, once again closing the score gap to 3-2. The Blazers did not allow it to stay that way for long, as Senior Ellie Kreuzburg shot through the Wheaton defenses and into the goal, continuing the back-and forth.

Not giving Wheaton any chance to recover, with only 22 seconds left of game time, Fernandez took advantage of a missed deflection from the Wheaton goalie and scored, icing the game at 5-2.

Blair did not have the strongest start, and this led to a tense second half. Koro, who came one goal shy of a hat trick, noted this as something to work on. “I think starting strong, that’s very important, starting out very strong and pushing each other up,” she said.

Despite the rough start, senior Zaida Willis notes that Blair’s ability to pull through at the end allowed them to secure this win against Wheaton. “At the end our finishing got a lot better and we were connecting passes well. We had a bit of a rough start and our energy wasn’t quite there, but we were able to pull through at the end.” said Willis.

Blair’s next home game is Thursday, October 6 against Paint Branch. Tickets can be found here.