The Blazers fall after hard-fought battle against the Vikings 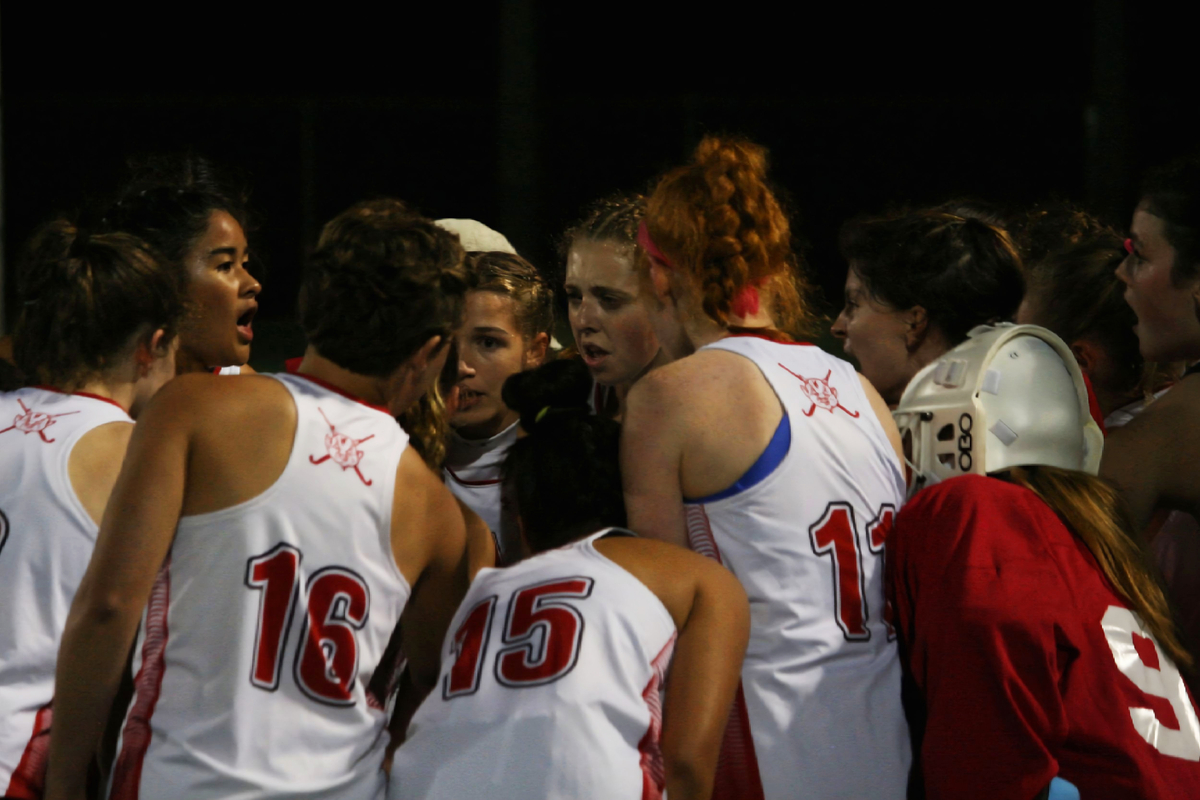 Photo: The Blazers huddle up to scheme their next play

Photo: The Blazers huddle up to scheme their next play Photo courtesy of Derek Mu.

On Oct. 17, the Blazers (8-3) lost a close battle with the Whitman Vikings (6-1-1) with a final score of 0-1. After dozens of back-and-forths between the two teams, the Vikings were able to seal the deal with their single point in overtime.

The match began with quick-paced exchanges between both teams’ midfielders. Blair's defense proved their worth early on. As the Vikings attempted to near the striking circle, the defensive line cleared the ball and turned possession over to Blair. At ten minutes, the Blazers earned the first penalty corner of the night, but their opportunity was minimized by a swarm from Whitman’s defense.

The first failed penalty corner motivated the Blazers. Blair inched their way to the goal, each pass smoother than the last. Even when a Viking slipped through the midfield, senior captain Karis Tebo swerved right in to stop any advances. With both teams fired up, the quarter ended deadlocked.

By the second quarter, the game’s intensity doubled. Senior captain Eleanor Moose led the way by penetrating the circle, but Whitman matched Blair in aggressiveness. Although the Vikings were a difficult opponent, the Blazers stayed tenacious. Possession ping-ponged between the two teams with Whitman repeatedly getting shut down, thanks to sophomore goalie Keelin Pegg. Pegg first swooped in to kick away the ball during a penalty corner, and in the final second, she blocked another shot as the buzzer sounded. 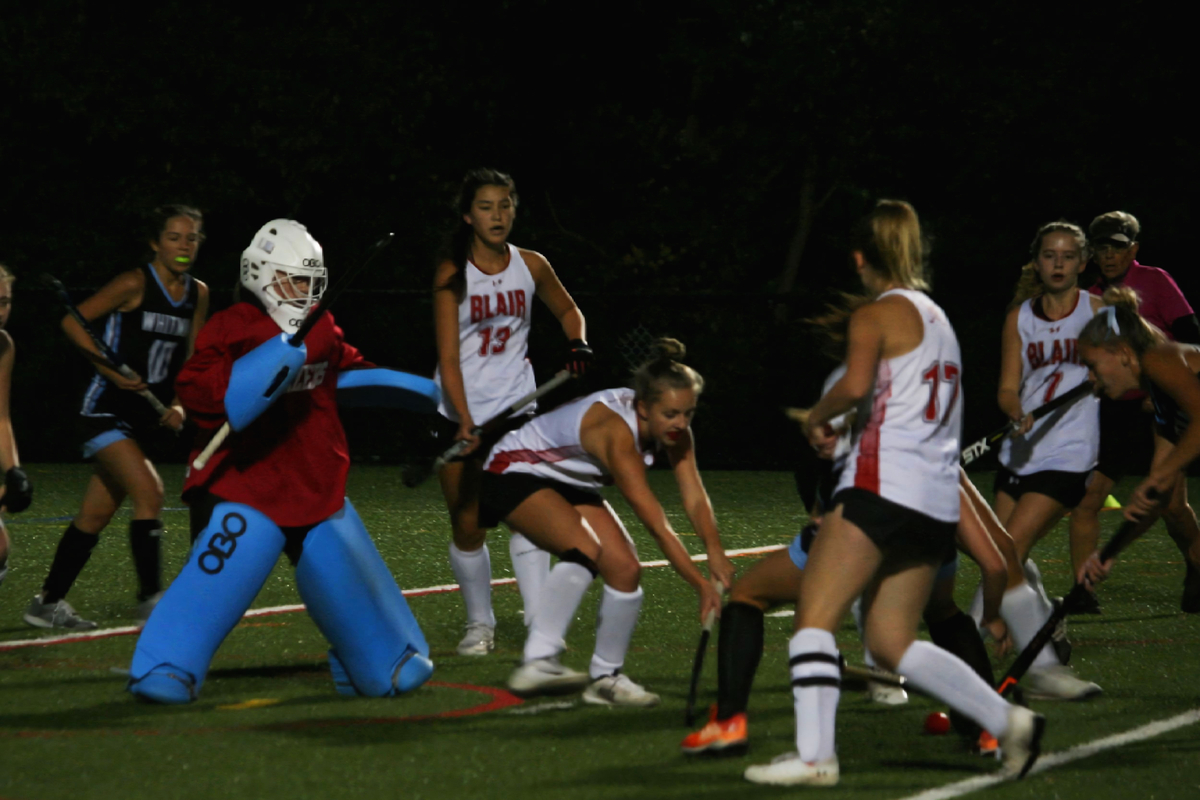 Neither team had scored when the second half began. Whitman grabbed an early advantage and its offense pressured the Blazers, but Blair’s defenders persevered. Senior midfielder and defender Grayson Davis blocked several attacks by the Vikings, making Whitman break a sweat. Davis stayed focused despite Whitman’s numerous advances. “There was intent behind every play,” she said.

The sounds of sticks clashing together and whistles filled the third quarter, with both teams looking for an offensive opening. The players made long strides across the turf, with short-lived advances from both sides. Pegg’s goalkeeping remained strong – with the help of Tebo and Davis, even an aggressive penalty corner in the last minute for Whitman found no result.

The tension only continued in the fourth quarter. Whitman’s powerful offense prompted several penalty corners on the Blair goal, but Blair’s defense held up as they skillfully deflected the attacks.

A significant contributor to the team’s defense was Pegg. They stepped up to the plate and successfully staved off three shots on the Blair goal in the fourth quarter alone. According to teammate Grayson Davis, the goalie played brilliantly. “Keelin had an amazing game, and she didn’t save 100 percent of the shots, but she saved 99.9 percent,” she said. Moose emphasized her statement, “Keelin’s a beast.”

Regulation ended with, a score of 0-0. The game continued into overtime, where the first team to score would win the match. 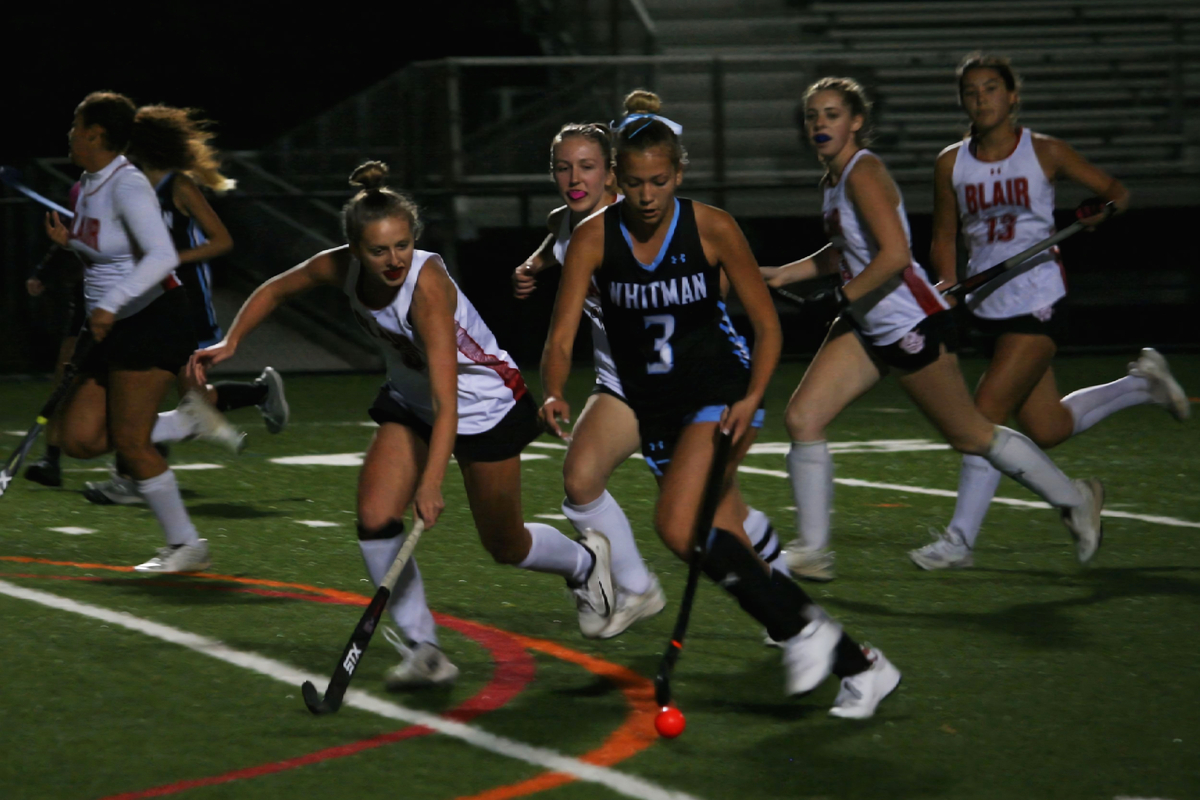 Photo: Blair hunting down the ball from unsuspecting Whitman player

Overtime was close and stressful. Blair fought a close battle, but they were limited to seven players per team, one of their players taken out because of a wrist injury. Whitman prompted a penalty corner early on, and Blair barely avoided a goal with a save from captain Tebo. Eventually, however, Whitman was able to score, and the clock froze with eight minutes and twelve seconds remaining in overtime.

Head coach Holly Stofa described some of the faults that may have led to the game’s result. “That was our second game where we’ve gone into [a] seven on seven overtime. We need to talk about some of the intricacies of that,” she said. “[We’re going to be] fine tuning some [sources of confusion] for these situations, that we might find ourselves in [in the] playoffs.”

Moose described the strength of the team despite the loss. “I am amazed by my fellow defense players on those corners,” she said. “I think they owned it, and they scared Whitman.”

Because no matter the outcome of this game, Blair is continuing to the regionals, supported by an incredible roster of people with incredible skills.

Blair’s next home game against Magruder is at 6 p.m. on Thursday, Oct. 20.