The Blazers snatch a win against the Bulldogs

After a slow first half, the Blair girl’s varsity soccer team brought it back for a 4-2 win 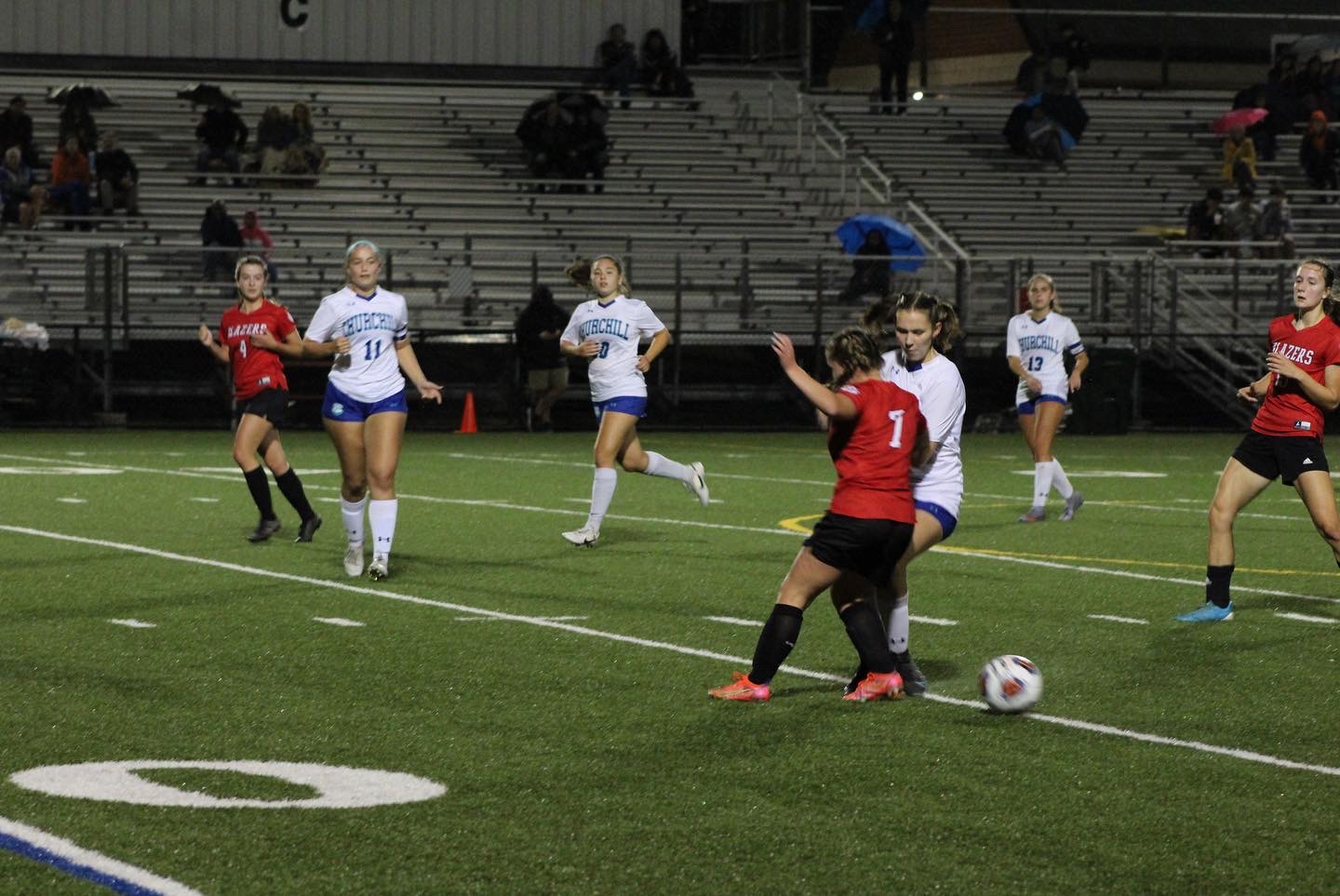 The game started fairly slow. Churchill dominated on offense, and the ball primarily stayed on the Blazer’s end of the field. Despite that, Blair's defense held strong, not allowing any attempts on goal to deter them.

The Blazers began to come to their senses, and possession of the ball swapped back and forth between the Blazers and the Bulldogs. The teams were proving to be evenly matched, their respective defenses holding strong against any attempts on goal. Overall, the first half was largely uneventful.

Head coach Robert Gibb attributes the slowness of the first half to the Blazer’s adoption of a more passive formation due to the poor weather. “We were playing a little bit of a conservative formation, because of the weather and unpredictability,” Gibb said. Despite it raining throughout the entirety of the half, the Blazer’s spirits were not dampened.

The clock ticked down to 0, and the first half ended 0-0. As they neared the last forty minutes of the game, the Blazers started to become more strategic with their offensive plays. According to senior Ellie Kreuzburg, the Blazers knew they had to pick it up in the second half. “We realized that we had to win this game if we want to win the division titles, and kind of message to the other teams that we’re not playing around,” Kreuzburg said.

Nine minutes into the first half, Blair junior Elena Fernandez sped down the field and scored, breaking the ice and pushing the score to 1-0. After countering a subsequent offensive attempt by the Bulldogs, Blazer defense pushed the ball up the field to Fernandez again, who scored another goal shortly after. 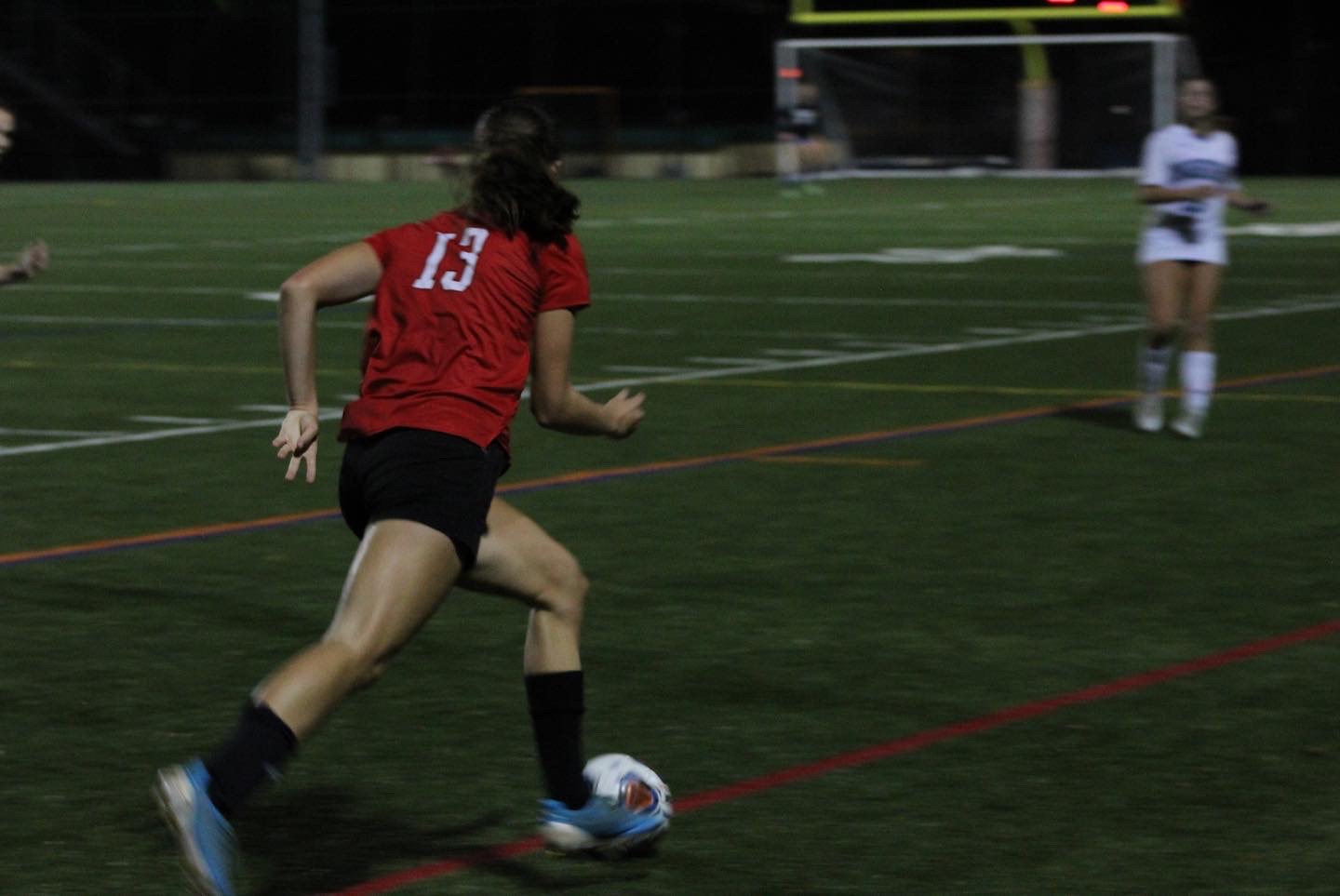 Blair making their way down the field

Photo: Blair making their way down the field

Photo: Blair making their way down the field Photo courtesy of Gabe Marra-Perrault.

The Bulldogs continued to try to push forward in response to the two back to back goals by the Blazers. Several minutes of clumping by the midline of the field eventually led to Blair gaining possession of the ball. Taking advantage of a pass back, junior Eliza Palmer powerfully propelled the ball into the goal, resulting in Blair’s third goal of the night.

Just as the Blazer’s settled into a comfortable lead of 3-0, Churchill retaliated with a goal of their own. The Blazers and Bulldogs clustered together on Blair’s side of the field for the next several minutes as Churchill’s offense effectively pressured Blair’s defense. Eventually, Churchill was able to slip in another goal, chipping away at Blair’s lead and putting the score at 3-2.

Luckily for the Blazers, Fernandez brought the lead back to a comfortable 2 point advantage with another goal just a minute later, the score was now 4-2. As the clock ran down, the Bulldogs made one final offensive push to no avail and the game ended, 4-2.

While Blair did not have any advantage over Churchill entering the second half, Gibb was proud of the adaption of Blair plays between the halves. “We made the adjustments and really gave it to our offense, and our offense has been able to score all year and our defense has done the job, so we got everything the way we needed it to be,” said Gibb.

Freshman Meron Koro confirms that Blair still has work to do in preparation for the next few games. “We’ll be practicing more of connecting our passes, and looking for each other,” said Koro.

As playoffs approach, the Blazer’s are adding the finishing touches to their strategies and coordination. “I feel like our team is really coming together very well, and since we’re approaching playoffs I think this is the energy that we need,” said Kruezberg.

Catch Blair’s next home game against Walter Johnson on October 20th. Tickets can be found here.


Alexander Liu. Hi, I'm Alex (he/him) and I'll be a staff writer for SCO this year. I'm passionate about public policy and international relations. In my free time, I enjoy drawing and watching terrible rom-coms. More »