The Blazers suffer a discouraging loss to Northwest

Blair's boys varsity basketball team (13-6) fell short Friday night against the Northwest Jaguars (8-10), losing their Senior Night game 74-59. Missed opportunities and lack of chemistry lead to a disappointing night for the Blazers who started off the season strong, but have now lost four of their last five games.

Blair’s head coach Damon Pigrom started all four of his seniors, forwards Leon Johnson and Abu-bakarr Bangura and guards Liam Olabagu and Leeroi Boker Jr., along with junior guard Michael Ayala Jr. The starting five started the game strong for Blair, scoring the first four points of the game and taking an early lead. However, the Jaguars did not let the Blazers run away with it. Clawing for the lead, after a couple of free throws the Jaguars tied the game up with five minutes left in the first quarter. The Blazers inched ahead and managed to stay ahead to end the quarter with a 14-10 lead. 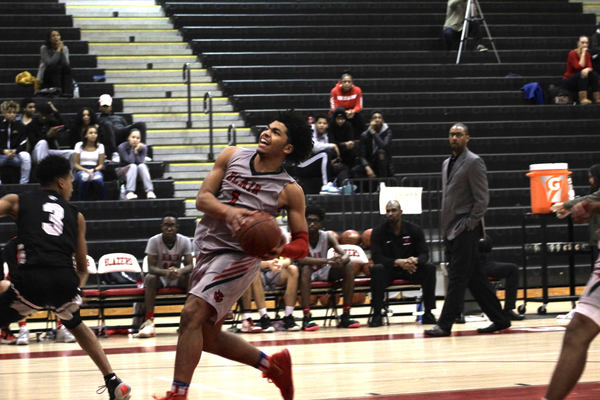 Photo: Senior night ended in disappointment for Blair as the Jaguars displayed their dominance

Senior night ended in disappointment for Blair as the Jaguars displayed their dominance Photo courtesy of Nathalie Molina.

At the beginning of the second quarter, Blair continued to fend off Northwest. However, after many missed opportunities and a few turnovers by the Blazers, the Jaguars took the lead with two minutes left in the quarter. One of Northwest’s guards sunk a couple of key threes and helped the Jaguars pull ahead to end the half with a 32-26 lead.

In the second half, Northwest began to take command of the game. The Jaguars tightened up their defense and their offense continued to dominate. The Blazers failed to capitalize on opportunities and their defense started to fall apart. By the end of the third quarter, Northwest had climbed to a 53-38 lead. With a similarly disappointing fourth quarter for the Blazers, which included a few untimely turnovers, the Blazers ultimately fell to the Jaguars 74-59.

The team attributed their frustrating Senior Night loss to the lack of teamwork and communication. “Our team chemistry, discipline and effort need to improve,” said junior forward Tommy Waltz-Chesnaye. “They were shooting really well, but that’s no excuse to lose to a team we were better than.” Blair’s rough streak will hopefully subside before their last home game and the playoffs that follow.

The Blazers will play their next home game on Friday Feb. 21 against Walt Whitman High School.