"The Book Thief" captures the power of words

Few authors have the power to change a reader's outlook on life or to give humanity to inhuman characters and the eloquence to create a world of just words, but Australian author Markus Zusak proves his ability as an author in his recent novel "The Book Thief."

Based on the lives of Zusak's parents, "The Book Thief" recounts the coming-of-age of Liesel Meminger as she grows up in Germany from an illiterate child to an educated, though tormented, young adult. When Lisels's mother is deported for being a communist, a family living outside the city of Molching adopts Liesel. It is there that nine-year-old Liesel, with the rise of Nazism in the background, learns the value of family. 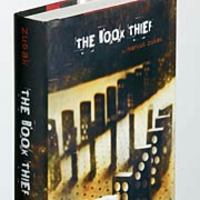 Photo: "The Book Thief," by Markus Zusak, recently was published in the United States after becoming a best seller in Australia. Courtesy of usetoday.com

Photo: "The Book Thief," by Markus Zusak, recently was published in the United States after becoming a best seller in Australia. Courtesy of usetoday.com

As Hitler's power grows, Liesel, whose new family is one of the few in their city to oppose Hitler, struggles to come to terms with the horrors occurring around her. Her only choice is to turn to books, which becomes both her savior and her ruin. It is this choice that changes her family, even more so than when they hide a Jew in their basement or when her adoptive father is drafted.

Unlike many other authors of young adult literature, Zusak writes a narrative that rings with poetry. Notes are littered throughout the narration, defining turning points and observations in the novel. Zusak's words command readers' attention as he recounts Liesel's bittersweet childhood. The author's powerful control of the words he directs creates a sense of longing, sorrow and hope. Zusak's expertise at directing both the reader's and the characters' emotions is, at times, eerily astonishing. Even when tragedy strikes the characters, the reader's can help but marvel at Zusak's skill as a writer.

Another way that "The Book Thief" stands out is in its unique method of storytelling: Death narrates Liesel's childhood. Contrary to many popular stereotypes of Death, he does not carry sickle, but he does harbor a strong cynical personality, mixed with a deep regret for his endless job. Rather than finding joy in his eternal job, Death is frightened, scared of the atrocities that humans are capable of.

Death foreshadows actions in the novel and warns the reader of the tragedies to come, events that are always countered by apologies and "what-if" ponderings in Death's narration. The novel opens with Death calmly informing the reader that "you will die," simply to get the looming distraction out of the way and on with the story. This abstract method is storytelling is just another one of the many aspects that allows "The Book Thief" to stand out as strongly as it does.

Avoiding typical generalizations of the WWII era, such as the heroic solider dying for his nation or the hardened war captain, Zusak creates realistic, honest characters. Liesel's best friend and neighbor Rudy is appropriately rebellious, though Zusak does not make the character irrational and unlikable. While Liesel falls into the typical spunky street-rat category, her love for books overwhelms her painfully normal qualities.

Published first in Australia as an adult novel, "The Book Thief" targets younger readers in the United States. Yet it remains a story of struggle and communication that readers of all ages should discover. Whether the audience is seven or 70, the novel's diverse cast and multifaceted themes are universally understood. Even if readers have a scarce knowledge of the history surrounding WWII, Zusak provides adequate information, making sure all readers can understand the historical setting.

Throughout the story, readers gradually begin to understand the themes of Zusak's masterpiece. Just as Hitler controlled millions of Germans through communication, Liesel strives to fight back through her words and readings. With a message equally as applicable 65 years after the era in which "The Book Thief" is set, the fictional account teaches readers how sometimes words are the only thing keeping us truly alive.