"The Brave One" does too much at once

From thugs in Central Park to illegal gun sales in back alleys, "The Brave One" is sure to instill fear into even the hardiest travelers with its harsh portrayal of New York City. But while the movie successfully terrifies tourists, it misses both of Director Neil Jordan's aims – to shine as a thrilling action film and simultaneously examine moral dilemmas.

The movie centers around radio show host Erica Bain (Jodie Foster), who lives a picture perfect life with her fiancé David Kirmani (Naveen Andrew). This perfection is shattered when a random attack in Central Park leaves David dead and Erica close to it. After waking from a coma, she is fiercely paranoid, and illegally obtains a firearm to soothe her fears. Upon killing a robber to defend herself, she becomes trigger-happy and addicted to the sweet taste of revenge. She roams the streets of New York at night, dispensing her own brand of justice. Detective Mercer (Terrence Howard) is assigned to track down this vigilante killer who is trying to do the NYPD's job.

The story itself has many holes, as the plotline is a series of coincidences. It seems as though Erica's incident in Central Park marks a turning point in her life that begins a long bout of bad luck. Her once peaceful life suddenly becomes dangerous: in less than two days, she witnesses a convenience store robbery and encounters thugs terrorizing innocent people on the subway. Honestly, what are the chances? 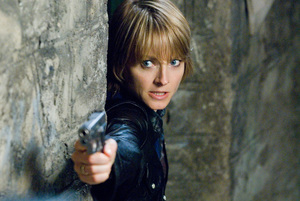 Photo: Erica Bain (Jodie Foster) dishes out revenge for the thugs who ruined her life. Photo courtesy of Warner Bros.

Photo: Erica Bain (Jodie Foster) dishes out revenge for the thugs who ruined her life. Photo courtesy of Warner Bros.

Although the plot is unconvincing, Erica's radio talk show, which Jordan uses to develop various angles of "The Brave One," is notable. Erica's shows put a poetic touch on her downward spiral into a vigilante killer, and spin the themes of ethics and identity into the movie. Jordan examines the loss of identity to a stranger hidden within. "You look at the person you once were, walking down that street," Erica ponders, "and you wonder – will you ever be her again?" She quotes poets D.H. Lawrence and Emily Dickinson on air to question the morality of revenge and probe the gray areas of right and wrong.

However, two-thirds of the way through the film, Jordan abruptly switches gears, abandoning all poetic pretense and forgetting all previous questions of identity and morality. From this point on, "The Brave One" disintegrates into a simple revenge fantasy – one that lacks the suspense, fast pace and captivating violence essential to an appealing action film. The film culminates with an altogether boring shootout and ends with one character abruptly changing his deeply held beliefs for an absolutely implausible and unsatisfactory finish.

The film's one true gem – Jodie Foster – redeems many of its flaws of "The Brave One." Her performance as Erica is both riveting and convincing. With her naturally expressive face, Foster intensely portrays Erica's paranoia, pain and rage. Erica comes to life through Foster – she is authentic and depicted without any Hollywood glamour. Coupled with the talent of the scriptwriters (who failed at composing a rich plotline but were experts at character development), Foster makes palatable Erica's conflicting emotions and fear about the person she slowly becomes.

Unfortunately, Foster's stellar performance is not enough to rescue "The Brave One" from its ambition. The movie overreaches, trying to appeal to a wide range of audiences, and attempts to be both a suspenseful action film and a commentary on social issues. Lacking consistency, the movie falls flat at both ends and winds up as confused and lost as its main character.

"The Brave One" (122 minutes) is Rated R for strong violence, language and some sexuality. It is now playing in theaters everywhere.