Despite setbacks, the cast and crew persevered to create a “dream of a show”

As the bell rings for the end of ninth period, while most students are eager to go home, senior Geo Rivera heads to the auditorium. He sets down his backpack and rushes to join the onstage warm-up circle that happens before every rehearsal. The humming of dozens of actors as they warm up their voices echoes through the auditorium, over seats long-unoccupied and an orchestra pit long-silent.

This fall, the auditorium will once again be filled with music, people and the timeless words of Shakespeare in this year's fall play, A Midsummer Night’s Dream. Veterans and newcomers to the theatre program alike are adjusting to being on-stage again and eagerly diving into the challenges of rehearsing a play in the midst of a historic pandemic.

The theme for the fall play this year revolves around nature, specifically the wild and mysterious Forest of Arden. Kelly O’Connor chose the theme because of its relevance to the climate change crisis and because it makes for an interesting and creative set. The most prominent feature of the set is the large tree at the center of the background.

Senior Annie Mount, the student president of stage crew, oversaw the creative process of realizing this idea. “A lot of the set design process comes from Ms. O’Connor and her vision, and then we take that and make it come to life,” Mount says. In this case, the stage crew uses canvas and a paint-dipping technique to make the texture of a canvas-wrapped frame seem like a tree. 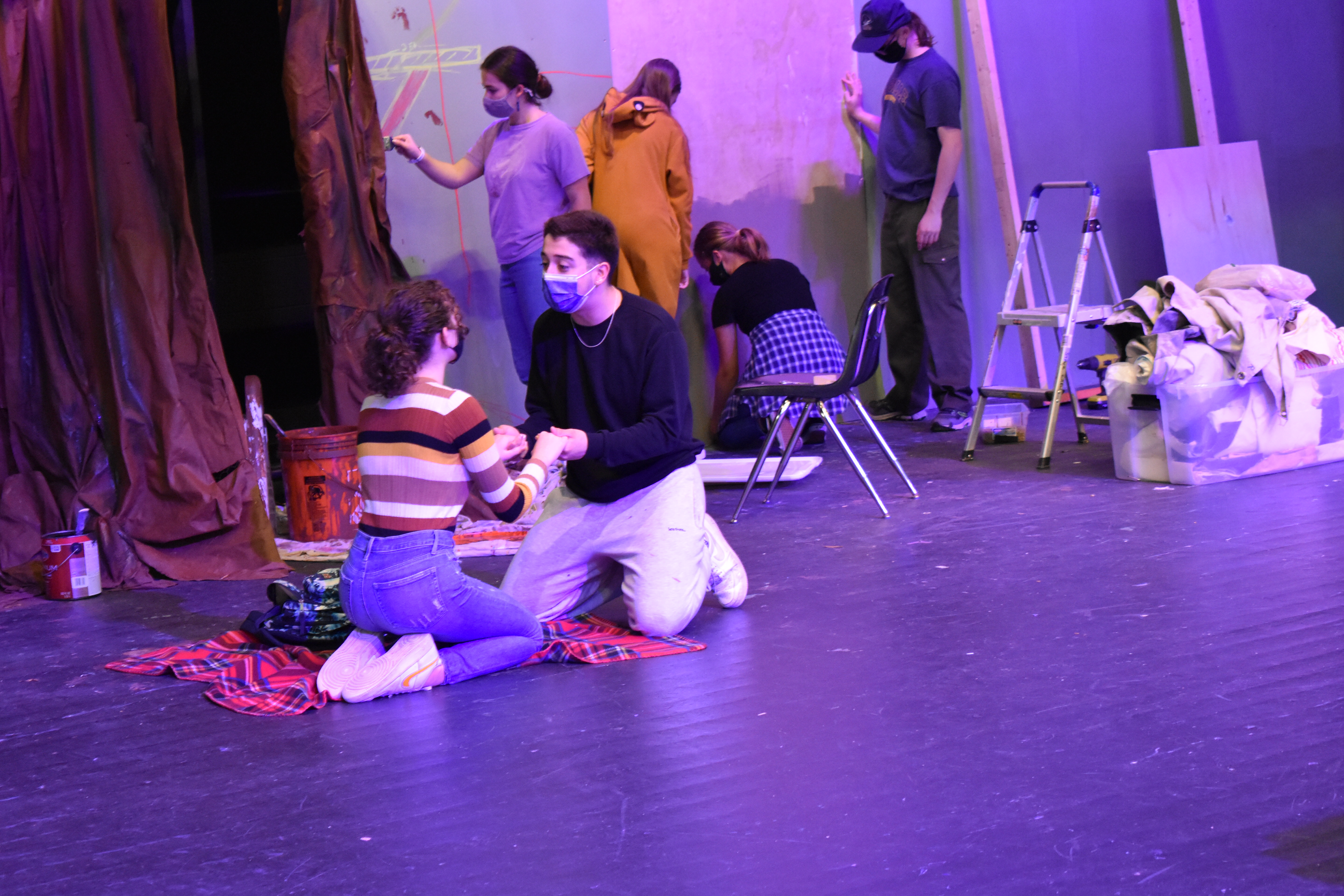 Photo: Sela Colavito, left, and Geo Rivera, right, rehearse a scene while members of stage crew paint the set in the background.

Although the production process for stage crew has been relatively unaffected by the coronavirus, the “black box” used for some performances will be the norm as long as the virus lingers. A “black box” theater is a simple and portable way to condense both stage and audience into a smaller space. The audience is closer together, all of them must be masked, and there are fewer people. As with many of the changes to the fall play, O’Connor believes there are tradeoffs to the smaller space. “Not a huge number of people can see the play because of those conditions, but we feel that the tradeoff is that you’re close to the action, [and] it’s a more intimate space,” O’Connor says.

Though the fight against the coronavirus is succeeding in Montgomery County, with 86 percent of the population at least partially vaccinated and 77 percent fully vaccinated, some measures continue to permeate day-to-day life, such as the mask mandate and COVID-19 fine arts requirements issued by the county. Such mandates make rehearsals more difficult for the actors, and shorten a play that would normally be two hours into an hour and 40 minutes.

O’Connor and the cast of the play both experience firsthand the drastic change that county and state restrictions made to the way actors rehearse and perform.“The actor’s tools are the voice, the body and the face, and we lose so much of the face with the masks on,” O’Connor says.

Habib Camara, a junior in the cast, was one of many theatre members whose enthusiasm about being back at Blair has been tempered by such measures. “Masks are probably the biggest thing in our way, and it really sucks that we have to do our performance with masks, because volume and expression and all that is hindered, but otherwise I think we’re adapting pretty well with social distancing,” Camara says.

The voice is particularly important, however, especially in A Midsummer Night’s Dream. Shakespearean English is often hard to understand normally, but with a mask, it is even harder for the audience to comprehend dialogue.

Senior Maxwell Pauls, who plays Queen Titania in the White Cast, has done many Shakespeare plays, both at Blair and elsewhere, but has adjusted to the quirks of performing a 400-year-old play. “Understanding the story and the dialogue is challenging, but the story is so much more intricate [than other plays] and has so many moving pieces that it makes it worth it,” Pauls says.

Their sentiment is widely shared among the cast, even among the many new arrivals to Blair theatre. Sophomore Sela Colavito has done many Shakespeare shows before, but Blair represents a step up. “I’ve only ever been in a play for my parents and other people’s parents, but now we’re gonna have an audience full of people I may or may not know which is kind of scary, and I’m excited for it,” Colavito says.

The influx of new members at the start of this school year was refreshing for the older cast and crew. Elisabeth Desmond, a senior and assistant student director, sees it as a challenge, but also a benefit. “Having so many new people is interesting, and everyone is really excited to be in a show. Even with the masks, it’s so much better than doing anything online,” Desmond says.

Theatre club gives many students the opportunity to reconnect socially, reforming a community that the pandemic split apart. Although there were still virtual meetings, and even a virtual production during the lockdown, the most essential part of theatre rehearsals was missing: being on the stage.

As with many aspects of returning to Blair, reconnecting with the stage was abrupt as well as relieving. Stage crew member senior Evelyn Owen-Sharratt had already worked on Troy Story in 2018 as a freshman, and is glad to be working on the set again. “It was so nice to just hold a drill again and just do something with it,” Owen-Sharratt says.

For the new members of the cast and crew, and those first entering the world of theatre, adding something new and interesting to their return to school has been worth the challenges of learning or relearning the skills of the stage.

Freshman Talia Lewis is excited to get back into theatre after being online, and thinks most newer theatre kids feel the same way. “We’re just so hyped up and we have so much energy built in from not being able to do theatre, so it’s kind of better than it used to be because now we’re putting all our effort in,” Lewis says.

This attitude is shared by many theatre veterans, and it keeps the energy up during rehearsals despite the difficult circumstances. Rivera also experienced that feeling of reconnection, but for him, it was more about the community he found at Blair. “We haven’t been able to use that outlet of being onstage and for so many of us it’s like a second home,” Rivera said. He returned to theatre as a senior much more involved and invested in it than when he first joined. “I’ve been doing this forever at this point and it's a much different feeling than being a sophomore two years ago being introduced to this new culture, and now having so many shows,” Rivera says.

Going from screen to stage altered the experiences of both the cast and crew while creating the fall play, but their energy and drive to practice and create remained constant. The seasonal high school tradition of the theatre production and the community that revolves around it is thriving through difficult circumstances, and will continue to do so in the future.