The Colesville Collective: Jazzing Up the DCC

Sophomore Milo Simon walks into the band room at Blair, just like he does every Wednesday. He plugs in his electric guitar and starts helping his friends set up for the day’s rehearsal. Once everything is in its place, the musicians take their places at the drumset, piano, and microphone. They exchange a glance, count off, and dive into their music with a casual but skillful focus, knowing their next gig is only a few days away.

With a diverse array of instruments and people, the Colesville Collective encompasses the music and musicians of the DCC. A groovy blend of guitar, piano and drums are the heart and soul of the collective, and the main instrument of choice for the main members. Although their main performances remain relatively static, there are also saxophonists, clarinetists, hand drums, vocalists, and bassists. No performance or rehearsal is the same, both due to the large variety of instruments and the nature of the music.

Simon and his friend, sophomore Noah LeBlanc, had the idea to start a music collective in early October after meeting in Blair’s marching band. To expand the group, they brought in other musician friends and new acquaintances from school who were interested. “I was in several different groups with friends from every school in the DCC… and one day me and Noah were just like, ‘we gotta put this all together,’” Simon says. He didn’t expect it would become what it is now: a large and robust music group spread over the DCC, getting gigs at local restaurants and businesses.

At first the Collective was casual; a jam session at someone’s house, in practice rooms, basements or block parties. Simon quickly realized, however, that the group had real talent and potential. A shared experience with performance, natural chemistry and passion for music prompted them to start performing for live audiences. “It was definitely something that felt very natural to us because we had been doing it for a long time [in school bands],” Simon says.

As the COVID-19 Delta variant lingered and Omicron surged, however, finding venues at which to perform became a challenge. “Since this is a relatively new group, we’re still getting it off the ground, and with COVID it’s been kind of difficult”, Simon says. Nonetheless, in the first month of the new year they performed at the Silver Strings Restaurant and the Marx Cafe, which were also the first official shows of the new group.

The membership of the Collective is relatively large for a music group with about 20 people spread throughout Virginia, Maryland and D.C. Some musicians have graduated high school, but still maintain ties with the Collective during holidays or breaks. No matter their location, however, everyone has two things in common; an interest in music, and talent at playing it. Many joined solely for the fun of playing jazz, as well as the aspect of being part of a community with a musical focus. Ian Alvarado is a drummer for the Colesville Collective, and found that being in the group helped him learn to play music with other people. “The point is to connect musicians from around the area,” Alvarado says. 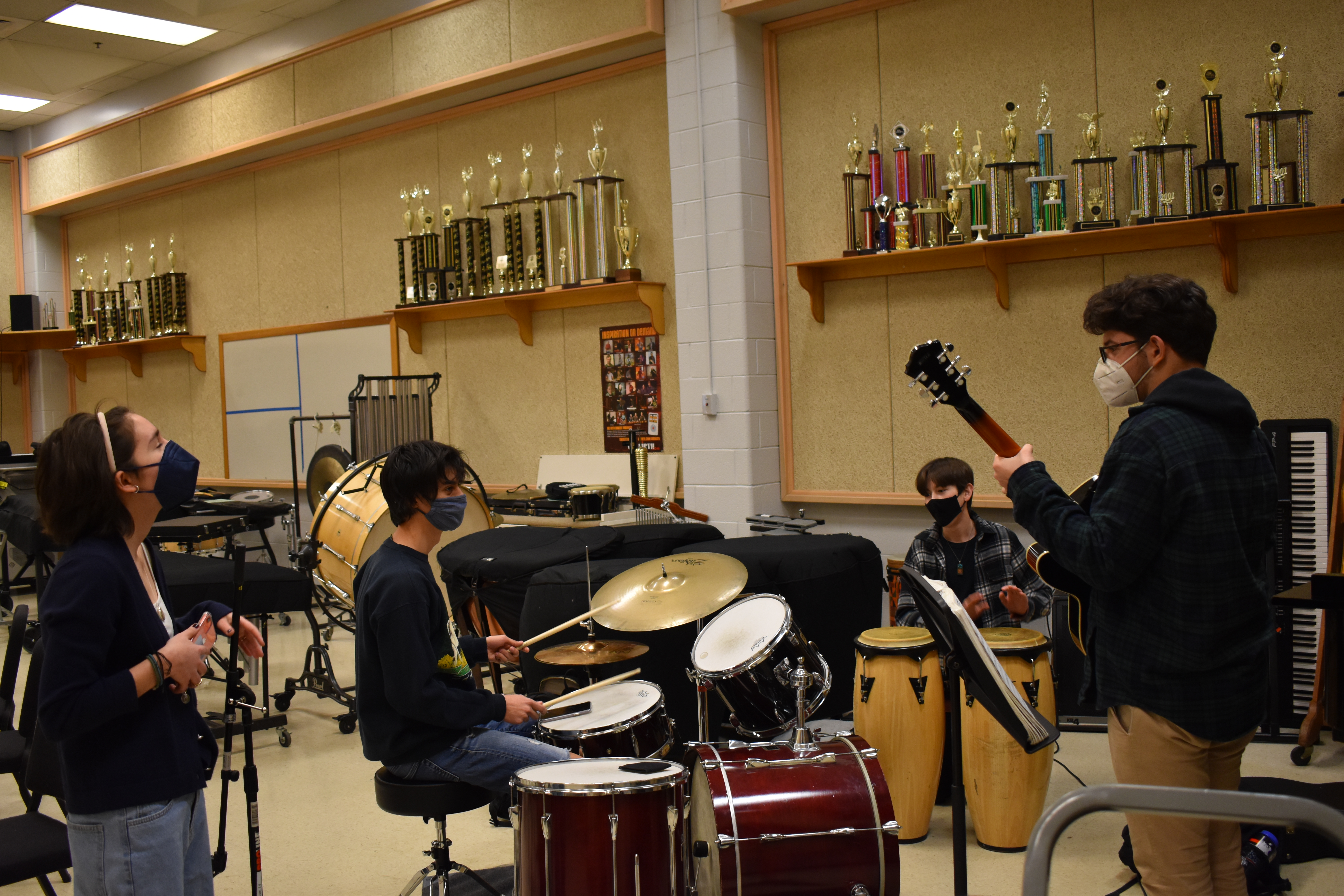 Simon and others in the Collective also recognized at the beginning of the school year that they wanted to reconnect after a year of isolation, during which it was hard to truly share their common interest in music. Sounds that would normally be clear and sonorous in the bandroom were compressed through computer microphones, and any hopes of playing music together were put on hold.

When students went back to playing in the classroom, opportunities to play in groups reopened, and with it a renewed interest in playing music. Many of the Colesville Collective musicians at Blair met through various music classes and bands once they returned to school. Simon, who was among those in the Jazz Band at Blair, started the Collective in part because he was inspired by the talent of his peers. “Once we were all together in a room playing and it sounded great, it became more of a feasible idea [to start a music group]”, Simon says.

Reconnecting through music also allowed the musicians to form strong social bonds. Especially after a year of online education, the opportunity to regularly interact and have fun with a group of people was welcome.

For example, sophomore Alden Newsom, who plays clarinet and saxophone in the Colesville Collective, got to know Simon better by joining the music group. “I wouldn’t be friends with Milo without the Collective…I knew him from elementary school and we hadn’t talked in many years, but we kind of reconnected through [the Collective],” Newsom says.

LeBlanc is a pianist and percussionist for the Colesville Collective, and before he joined, he was still feeling the effects of entering the school building for the first time as a sophomore. “It was valuable making all these connections; I barely knew anybody coming back [from virtual learning],” LeBlanc says. Playing music multiple times a week in the Collective brought him closer with Simon and others in the group, and he met people performing at shows that he would have never known otherwise.

Although many members of the Collective were involved in music before joining, all of them improved as they spent more time around each other. High school bands and music classes fostered their interest in music, helped develop their musical skills, and allowed them to meet each other in the first place. Junior Philip Daniel plays the saxophone and is part of the jazz combo for the Colesville Collective. “I got added to the [Colesville Collective] group chat after playing with Milo, Ian and Noah in jazz [band],” Daniel says. Although he isn’t going into a music career, he still plays in the Collective for fun. “I like jamming, [and] I think it’s really fun, and I want to get better at it,” Daniel says. He also recognizes, however, that the group as a whole has talent and potential. “I think [other members of the Collective] are good enough to [pursue a music career] if they wanted to,” Daniel says.

The creativity and talent of the Collective also shows through their music. Jazz is an inherently creative genre of music, and an essential component of it is the ability to improvise as a group. Each person has to show dedication, individual talent, and interpersonal skills to succeed. Such qualities are common among musicians in the Collective, which is why it remains a large and adept group despite being so dispersed.

The most important part of the Colesville Collective is not the group itself, but the relationships formed within it. “Part of being a successful musician is creating a network of other musicians, and this really helped me,” Alvarado says. Being able to practice playing with other people and performing for a crowd are essential skills for anyone aspiring to become a musician. It is no surprise, then, that nearly all of the students in the Collective plan to follow that path. Even after they leave, other budding jazz players will rise in their place and continue strengthening the musical programs and communities in the DCC.