The come up of eSports

Nervous athletes pray that their hours of practice pay off, downing energy drinks before heading off to play. Devoted fans pack the arena, wearing the merchandise of their favorite teams. This is not your average Sunday night football game: this is eSports. 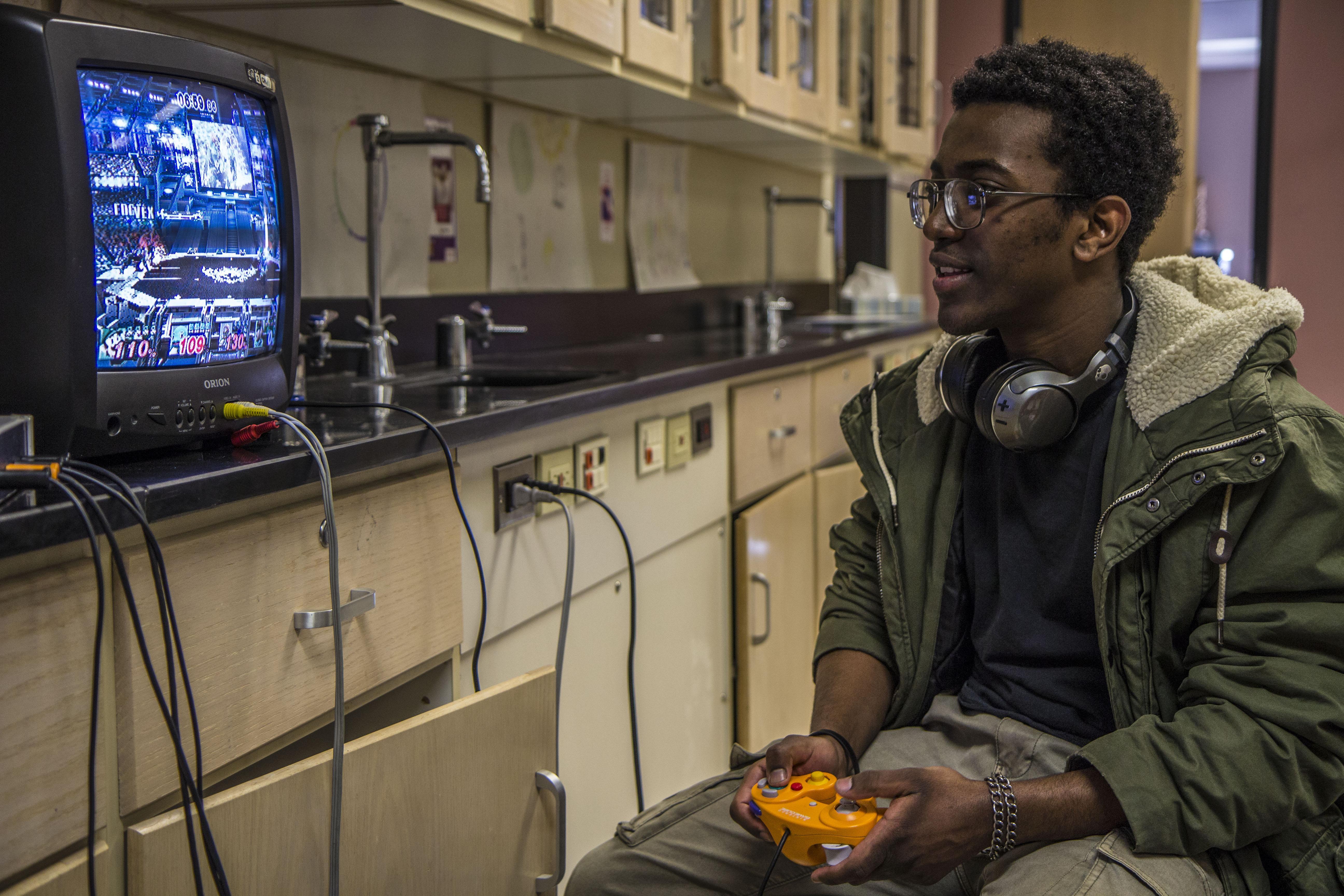 Photo: Hoping to sharpen their skills, students meet in 352 during lunch to battle each other in Super Smash Bros.

Photo: Hoping to sharpen their skills, students meet in 352 during lunch to battle each other in Super Smash Bros.

While teacher Eric Lodal isn't old enough to have played in that first tournament, videogames appealed to him early on. He first entered the world of video games at the age of two - his father had an Atari, and while he wasn't allowed to play it very often, he played as much as he could. "The thing is, you have this phase you go through early on where you are able to go to somebody else's house. The main attraction for going to somebody else's house for me always was 'Oh you have video games? I can't play those at my house. I want to play those at your house'," Lodal says.

He continued to dabble in different video games throughout the years, but it wasn't until high school and the popularization of the internet that he became aware of eSports. The internet has a way of uniting people with similar interests from a large area. His first couple of competitions were casual. Players would simply meet up at Local Area Network (LAN) centers, put down $20 and play. The team who won first got the biggest chunk of the money, the teams in second and third got smaller pieces, and the rest of the players got the satisfaction of having played.

Similarly, sophomore Steven Juarez got hooked as soon as he laid his four-year-old eyes on a console. However, unlike Lodal, Juarez' parents actually encouraged his fascination with video games. "I think it's because my parents were like, as a child you need something to do because you're not in school yet, because of my age, and so my parents bought me a gameboy," Juarez says.

As time has passed, Juarez hasn't stopped playing games. He finds that playing games is a stress reliever. Pressing the play button is like entering an entirely different universe, a place where he is never sad or bored, a place where he is able to communicate effectively through his gameplay. "It feels like you're in a new place, like everything doesn't matter...I play anything. If you give me a game, I'll find some way to have fun in it. I swear, you could give me Tetris, you could give me My Little Pony, I'll play it." Juarez states emphatically.

Lodal, on the other hand, is more particular about what he plays. While he is open to playing whatever, he prefers to find new games to play by going on review websites and seeing what's popular at the moment. It allows him to find the best storylines, graphics, or whatever he feels like spending his free time on. "I play currently something called Smite, which I only play because other people are playing it...I play things that are good. I go onto review websites and just look at what things that people have enjoyed and so that's what i'm playing currently, but I'm kind of open to whatever," he says. 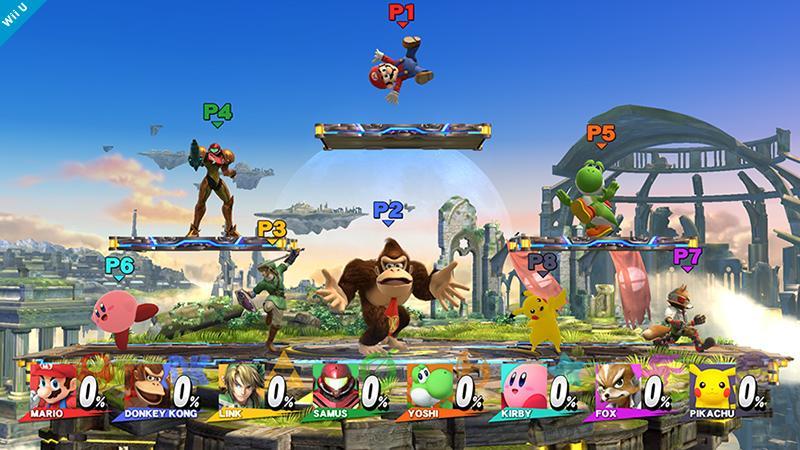 Photo: Like many others in the Smash club, Steven Juarez competes in Super Smash Bros competitions on the weekend.

Photo: Like many others in the Smash club, Steven Juarez competes in Super Smash Bros competitions on the weekend.

Recognizing that he was spending so much time at Smash club, Juarez decided to attend his first Super Smash Bros tournament at the University of Maryland last year. Since then, he has attended more than ten competitions. To prepare for competitions, he estimates that he can spend up to four hours a day practicing, the same amount of time that Division I NCAA athletes devote to their sports. "I spend hours like okay, we're just gonna do this same thing over and over and over and over until we're really good at it, which I feel like is unappreciated," he said.But, for the most part, Juarez attends the competitions because it allows him to meet up with others who have similar interests while also letting him practice his skills. "I'm most definitely competitive...but it's really fun. We all just enjoy the same thing," he said. It amazes him that high schoolers like himself, college kids and adults can all enjoy the same thing.

While Lodal no longer has the time to compete in tournaments, he is still able to recognize how much skill it takes to be professionally good. It takes a lot of practice to build up a player's muscle memory. "You have 10 frames when you the refresh rate (how fast a computer screen refreshes when playing) is 60 times a second, so that gives you a sixth of a second to react and do something. That kind of thing takes practice, just like playing an instrument at a high level that you run through scales and such to develop these skills," he said.

Besides the physical practice, players must also build up their mental stamina for the best strategies. A big part of this is focusing on the metagame, which Lodal describes as analyzing what moves are popular at the moment, then figuring out what is more powerful than what's popular so that your move doesn't have a counter. So, if you're playing rock, paper, scissors, and you notice that most people pick rock, the smart move for a gamer is to pick paper.

However, things in the eSports world aren't so simple. "When you have something like League of Legends, you have like 80 plus different characters you can choose, then it gets very complicated what the paper-rock-scissors relationship is. It's not just three things. It's so much else, and it's like what things do you care about and what things do you not. It's a separating signal from white noise type of thing," Lodal explains. Gamers must constantly revise their strategy as the metagame evolves.

Considering how many hours players have to put in, it makes sense to Lodal that video gaming gets recognized as a sport. "I think it makes sense that it's this big and I can't imagine it'll do anything but get bigger from here...It may change what it looks like, but I fully expect within ten years that there will be a channel fully dedicated to this kind of stuff, if that's even how we get TV anymore," Lodal says.

esports inch closer to being mainstream each day, as they're expected do draw in 590 million viewers by 2020. Teams like the New England Patriots and the Washington Wizards that have already invested $20 million to purchase part of these gaming franchises are looking into expanding their hold on the world of eSports. Organizers up the ante by advertising that $24 million can be won during a tournament, with a single player able to win $10.8 million. Revenue from the tournaments approaches $1 billion.

As Japan names eSports as a medal event at the 2022 Asian Games, and France considers adding video gaming to the 2024 Olympic Games in Paris, it's clear to gamers like Juarez and Lodal that the come up of eSports has finally arrived.