The cost of another dimension

Three-dimensional (3D) stereoscopy has a reputation for being a gimmicky piece of technology that is hastily used in movies to make more money. With the surge in old films being released in 3D, filmmakers are encouraging the industry to value profits over fan loyalty. The recent re-release of "Star Wars Episode I: Phantom Menace" epitomizes this trend. 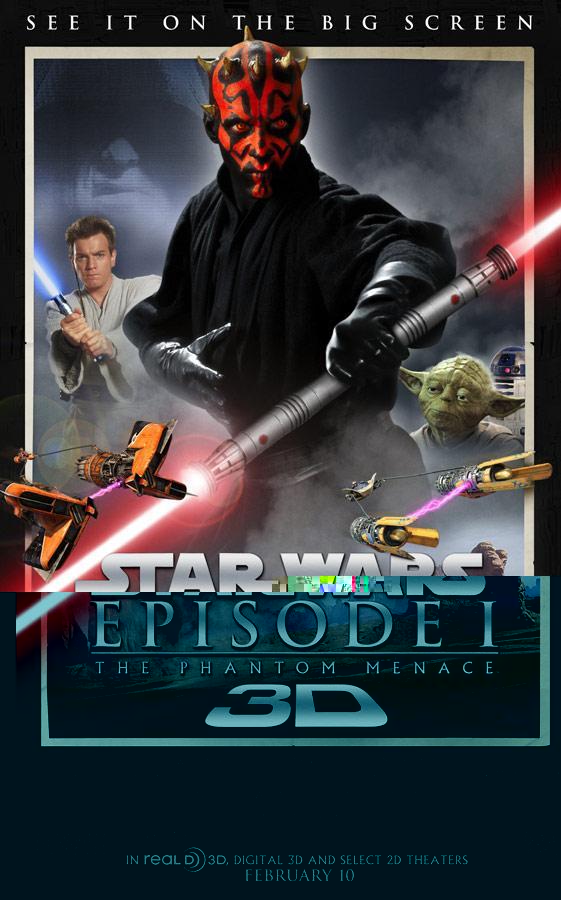 Photo: The movie poster for "Star Wars: The Phantom Menace."

Photo: The movie poster for "Star Wars: The Phantom Menace."

While 3D technology has been successfully used in movies such as "How To Train Your Dragon" and "Alice In Wonderland," most 3D films are unable to effectively take the cinematic leap between two and three dimensions. The market has become oversaturated with imitations riding on the coattails of successful 3D films in order to make a quick buck. 3D technology is by no means inane or primitive, but with every step filmmakers take towards creating a better 3D experience, they take several steps backwards in destroying America's cinematic culture.

The awe-inspiring effects and mixing of reality and fantasy in James Cameron's 2009 film "Avatar" brought renewed interest in 3D technology. This breakthrough was only possible because Cameron tediously shot the film in four formats: 3D, Dolby 3D, XpanD 3D and IMAX 3D. Together, the effect was spectacular. "Avatar" set a precedent for 3D movies, as any movie with "3D" in the title implies a sense of great technical achievement that contends with Cameron's genius.

However, many of the directors and producers he inspired could care less about the hard work that goes into creating an effective 3D movie. These directors also know that by slapping "3D" across their movie title, regardless of whether or not they are made as meticulously as "Avatar", it can generate large amounts of revenue.

M. Night Shyamalan's "The Last Airbender" is a paradigm of this carelessness. Unlike Cameron, Shyamalan did not even bother shooting his film in 3D. Instead, he took a shortcut and digitally altered and processed the film's images in post-production to make them look 3D. "The Last Airbender" was considered a financial success with a box office of over $300 million. However, it had a $150 million budget, was universally panned by critics and won five Golden Raspberry Awards, an award given to the worst films ever created.

No good can come out of a 2-D movie like "The Phantom Menace" being re-released in 3D. Like "The Last Airbender," the "The Phantom Menace" looks horrible because the movie was never meant to be seen in 3D stereoscopy. The film's original shots are unable to jump out at the audience and amaze with 3D glory. Landscape scenes lacked a 3D feel and overall, the experience fell flat for those who were looking for the next "Avatar."

Altering a 2-D movie with 3D effects does not merit the film to include "3D" in the title because it misleads the audience into thinking they are going to see something brilliant and well produced. "The Phantom Menace" sacks the reputation of the Star Wars franchise because it not only debases the original 2-D film with artificial rendering and illusions, but also encourages selling out moviemaking beliefs for greater revenue.

Not all movies re-released in 3D formats are driven by capital gain, as Disney manages to reproduce classic films such as "The Lion King" and "The Beauty and the Beast" as high-quality and nostalgic masterpieces. However, not all companies are as brilliant as Disney. Although Disney is doing it right, it stands alone in the midst of reproduced garbage that exploits 3D technology as a gimmick rather than an experience. In the future, film companies may not care that they haphazardly repackage America's classics as 3D because in the end, they are going to make money regardless of whether or not their work is well received.