I remember where I was when I heard the news. It was a Thursday afternoon. I was doing math homework and sitting in the living room with the TV on in the background. Over all the shrieking and bubblegum pop music I heard it: "Total Request Live" ("TRL") would be airing their last episode ever in a matter of weeks. 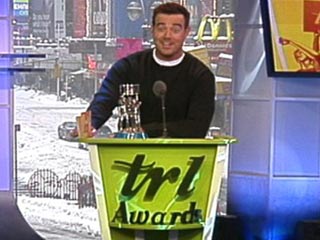 By no stretch of the imagination is "TRL" a groundbreaking, life-changing television show. It's been recently overshadowed by the Internet, satellite radio and other music countdown shows as technology advances. Every music video you could ever want to watch is available to you within seconds, so why should the end of "TRL" really even matter? Because it marks the end of an era for all of us who grew up on Carson Daly's awkward humor, boy bands and '90s music. Because - let's face it, you weren't a preteen unless you ran home and watched "TRL" at 3:30.

"TRL" leaves behind a decade of celebrity visits, entertainment news and of course, new music videos. From the breakup of the Backstreet Boys to the breakup of Britney and Justin, "TRL" has been there to report it, and to feel our pain. As avid fans of all boy bands, catchy R&B musicians and pop princesses, we hung onto every word, every video premiere and every celebrity appearance the show had to offer.

Even sitting here five years later, I regret not being able to stand outside the studio in Times Square with an embarrassing and glittery sign. I have missed my chance at giving a shout out to "my girls at Eastern Middle School," and so will a whole generation of preteens who will have to transition to their teenage years without the guidance of celebrities and musicians hungry for fame and recognition.

Maybe the end of "TRL" resonates so strongly with us because it also serves as a glaring reminder that '90s music (think Spice Girls, 3LW, NSYNC, pre-breakdown Mariah Carey) is also long gone. The music that shaped this generation, the music that we played at sleepovers and the icons we longed to be are no longer major influences on our lives; they're just songs we secretly listen to on our iPods when nobody is around.

So although maybe you've repressed all memories of your embarrassing preteen years, tune in on Thursday Nov. 12 for the finale airing and say goodbye to a decade of "TRL." Look forward to whatever the musical world has to offer in the future, and maybe, for a little while, spend just a little quality time with our past.