The First Lady of Blair

The story behind Mrs. Johnson, our principal

"Exciting, challenging, rewarding, stressful and beneficial." These are just five words Renay Johnson uses to describe her job as the principal of Blair. This is Johnson's fourth year as principal, following five years as principal at Takoma Park Middle School. It is an understatement to say that Johnson's journey has been a long one. She's been in public education for 25 years and has enjoyed it every step of the way.

Johnson grew up in Severn, Maryland, the younger of two children. She spent a lot of time at her grandparents' farm in southern Maryland. "There was about six of us [cousins] who would stay two or three weeks in the summer and we looked forward to it because we were all around the same age," she recalls. Johnson learned a lot on the farm. She remembers the trouble that she would get into when she and her cousins failed to follow her grandfather's advice. Once, when they forgot to feed the pigs, the pigs escaped. They had to help gather the pigs up by making a circle around them and pushing them back towards the house. "It was a lesson learned to feed them so they wouldn't get out, looking for food," she says. Another time, after one of his sows gave birth, her grandfather offered Johnson and her cousins the option of money for ice cream or a piglet. All but one chose the ice cream. A few years later, when that cousin was able to sell the pig for $350, Johnson's grandfather asked her an unforgettable question: "Do you want instant gratification or something that's going to pay off at the end?'" The message has stuck with her ever since.

In high school, Johnson participated in several activities. She played clarinet in the marching band, ran track for three years and played lacrosse. She also loved to read, from childhood onwards. After her grandparents bought a set of encyclopedias, Johnson remembers thinking, "I'm going to stay the whole summer and read through every encyclopedia." She got hooked on reading about the presidents, their lives and their families. When she got to college, however, Johnson wasn't interested in studying education. "I thought I'd go into nursing. There are elderly care homes that my family owns. I have aunts who are registered nurses," she explains. However, when she attended the University of Maryland, she realized that she disliked the required classes and that nursing wasn't for her. Her advisor asked her whether she'd like to be a teacher. "Like little kids? Yeah, I'll do that!" Johnson responded. That conversation, Johnson says, was the reason she decided to become a teacher. "Really, it was the advice that made me major in education," she reveals. 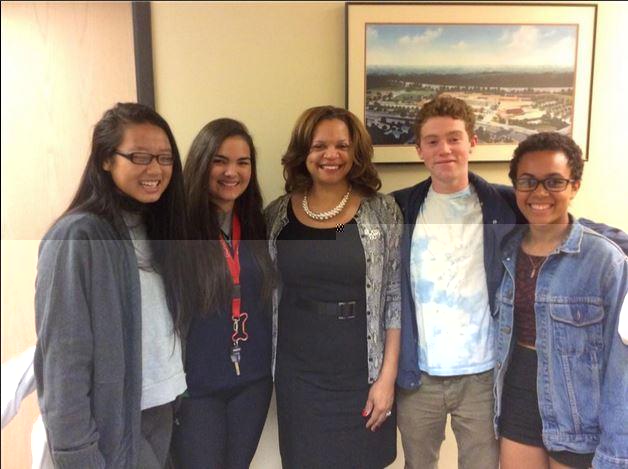 Johnson taught fifth and sixth grade for several years until another suggestion caused her to change her career path once again. The principal of her school recommended that she become a counselor after seeing a lot of kids in her room during lunch. She loved the idea and got her counseling degree from Johns Hopkins before settling down as a counselor at Bradley Hills Elementary School. However, after taking charge several times when the principal was absent, Johnson realized her true calling was to be an administrator. After getting her administrative certification, Johnson became a counselor at White Oak Middle School, then head of the counseling department and later acting assistant principal. She then became an assistant principal at Paint Branch High School. Finally, Johnson served as principal of Takoma Park Middle School for several years before deciding she wanted to go back to high school administration. After interviewing with a panel of about 35 people, Johnson became the first female principal at Blair. "They call me the first lady of Blair," she says happily.

One of Johnson's favorite memories of Blair is the welcome reception the Parent Teacher Student Association held when Johnson first became principal. "A lot of Takoma families said, 'We get to keep you for four more years? We're so happy!' Everyone was just so happy that I was here," she says.

Although Johnson loves her job, she still makes a point of having fun. Johnson loves movie night with her children Jamie and Jordan. "It's such a big treat, even though my kids are older now. [I love] popping a big bowl of popcorn and putting in 'Titanic,' 'It's a Wonderful Life' or 'Jaws,' " she says. She also loves bicycling with her family.

If she chooses, Johnson can retire in five years. She says that she may want to teach an education course at a university. "I never want to stop giving back to students, families and education," she states. However, she also dreams of starting her own business called Nay-Nay Jumpers where she gets to design children's clothing. "My favorite show on television is 'Project Runway' so I always say to people, when I retire, I'm going to learn how to sew and I want to make little girl's jumpers and maybe include storybooks with them," she notes.

But Johnson won't leave without making a big impact in the lives of Blair students. "She's super involved. Last year, when we had the French and Spanish Honors Society induction, we forgot to tell her and she was disappointed because she wanted to come," senior Annie Xu says. In June, Johnson will be graduating the first class she's had for all four years. For some, she's been principal for seven. "I'll probably cry at graduation, because I feel like I'm the parent of most of the kids because a large population of the kids, I've been their principal since sixth grade," she says. "It'll be good since I've seen them since the awkward sixth grade, through middle school, to mature, beautiful young people who excel and are successful and will get into a lot of great colleges."