Sophomore puts wit to the test in Chinese aptitude game

Board games aren't just for the bored, as sophomore Robert Wallace can testify. With his eyebrows knitted in concentration and his eyes sparkling with energy, he recounts his last quest to conquer the territory of a 19-by-19 board from his opponent. Strategy is essential – as are an open mind, quick decision-making skills and a cool temper – but Wallace says that these skills come with practice. Go, a Chinese board game and Wallace's favorite hobby, is certainly more than the average game of checkers. 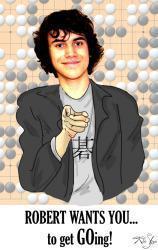 Photo:
Historians date the game to approximately 548 B.C.E. in China. According to "Teach Yourself: Go" by Charles Matthews, accomplishments in the game were essential to the image of a well-rounded gentleman, or mandarin. Keith Arnold, who organizes the Baltimore Go Club and is on the board of directors of the American Go Association (AGA), says that though the game originates in China, it is most commonly attributed to Japan because the Japanese culture predominantly impacted the game and is responsible for spreading it around the globe. "Japan was a more prosperous nation at the time and they had more contacts around the world," Arnold says. "So most of the terminology is in Japanese."

Thanks to organizations like the AGA and smaller club sects like the Baltimore Go Club, the game's popularity is on the rise in other western countries such as the United States. Though many may consider it old-fashioned, Arnold believes that its age and resistance to change is one of the most impressive aspects of the game. "It is the oldest game still played in its original fashion in the world," he says respectfully.

In the two-player game, one player is allotted 180 stone or glass pieces and the other 181. The object: to occupy more than half of the board. To do this, one must develop a personal strategy and be able to predict the strategy of one's opponent. One method is to surround the opponent's stones on all sides, thus capturing it and removing it from the board. A common mistake of amateurs, Wallace says, is getting too wrapped up in capturing that one forgets to focus on claiming more territory through deft strategy. Arnold, who compares the logic of the game to staking a claim on open territory in the American West, says the strategic trick is "finding the right balance" by putting stones far enough apart that they can withstand attack, but close enough together that the opponent cannot penetrate the territory.

Wallace, who first found out about Go while reading a Manga graphic novel about two years ago, encourages his classmates to learn the rules to the mind game that has become his favorite hobby. As one of the biggest challenges of being a Go fanatic is finding willing opponents, Wallace often challenges other Go-players to online matches, recommending Yahoo.com, which lists and describes the rules in depth. Because of the intricacy of the game, however, Wallace says that "no computer in the world can play the game." Reliance on power of the human mind, which not even a computer can process, is just one of the reasons why Wallace has kept up with this hobby.

With an excited grin, Wallace says that the mental complexity of the game makes it more appealing to him as a gamer. Whether he plays online or face-to-face with an opponent, he finds the game personally relaxing rather than perplexing. "I like the way the pieces look arranged on the board," Wallace says, serenely.

Arnold says that even more experienced players like himself appreciate the game for its history and meaning. Comparing Go to the more popular strategy game of chess, Arnold says he prefers the constructive, rather than destructive nature of Go. "The object is not to kill pieces," he says, "but to use pieces more efficiently than opponents."

Wallace also demonstrates a deep respect for the origins of the game and traditions it represents, through observing customs of traditional courtesy during matches. Though he has the option of chatting with his opponent online during a game, he often opts out, because especially in Asian countries where Go is played more frequently, it is polite to stay silent so each opponent can plan his next move in peace.

Hoping to inspire future opponents in the halls of Blair to give his game a try, Wallace has become the ultimate "Go-salesman" to the Blair population. "There really is no game like it," he says.