The golden (and blue) years

The dynamic Blair-B-CC rivalry was fuel for Blazer spirit

Two buttons adorn Shirley Schlosser McCarthy's plaid lapel. One is five decades old and the other is brand new. Both bear the same message: "BEAT B-CC."

McCarthy, '58, was one of hundreds of Blair alumni to make the pilgrimage back to their alma mater for the 75th anniversary weekend. In commemoration of Blair's rivalry with Bethesda Chevy-Chase (B-CC), the anniversary festivities included a football game against B-CC on Oct. 17. The game had a special significance for grads - between the '40s and the early '70s, B-CC was Blair's chief rival. Though this game may seem no different than any other to current Blair students, Betsy Dillard McInnis, '52, remembers a time when such an event would pack the stands. "I think the students lived and breathed it," says McInnis of the rivalry. "It was huge." Whenever red and white clashed with gold and blue, one thing was guaranteed: fierce Blazer spirit.

A rivalry is born

The friction between the Blazers and the Barons developed soon after Blair was founded in 1935. They were the two of the largest schools in the area and, at the time, the closest to each other. "We were the two oldest high schools in the county, and we started playing each other from day one," says Mark Levin, '66, the founder of the Blair Alumni Association. 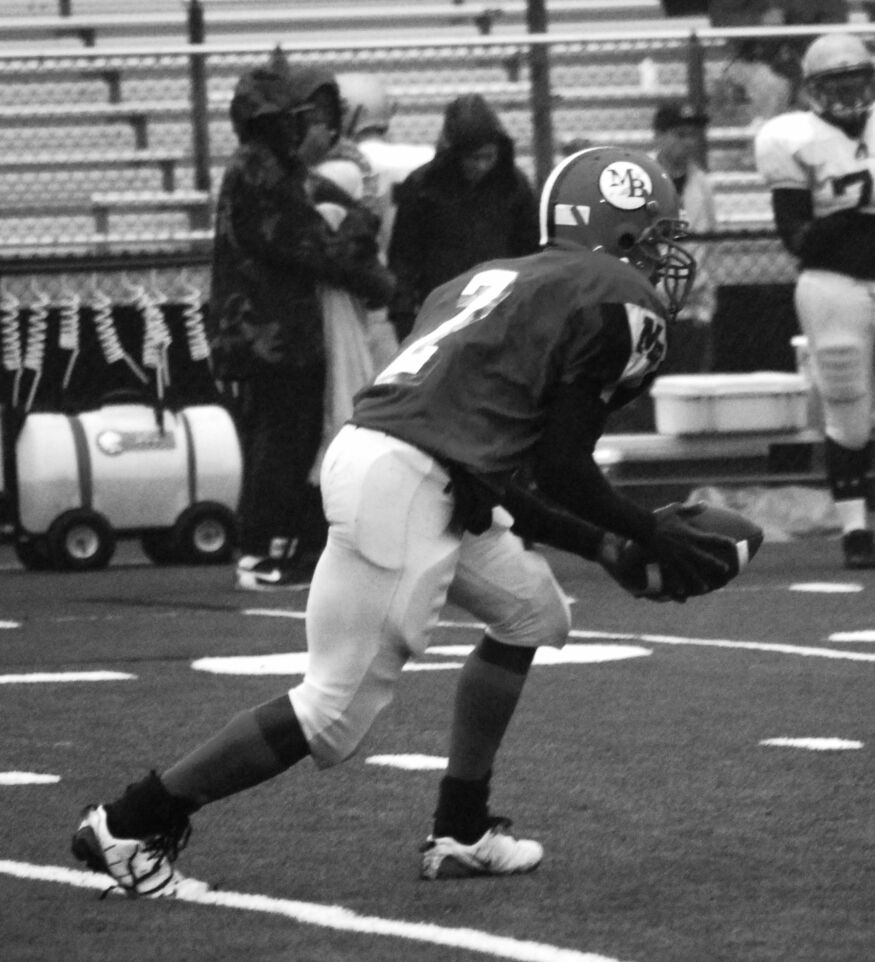 Photo: Senior Andrew Gondor prepares to rush downfield with the ball and elude the Baron defenders.

Photo: Senior Andrew Gondor prepares to rush downfield with the ball and elude the Baron defenders.

The fact that the two high schools also shared a feeder middle school, Montgomery Hills Junior High, fed the rivalry. Middle school friends would part ways for high school, but the familiarity invigorated the rivalry. Tom Dunlap, '75, explains that knowing some of his high school opponents from Montgomery Hills made the rivalry more zealous. "That made it more competitive. You'd run into people you used to compete against in junior high in senior high wearing a different uniform," says Dunlap.

Because Bethesda and Chevy Chase are traditionally wealthier areas than Silver Spring, the socio-economic gap between the Blair and B-CC student populations also fueled the rivalry. Several alumni remember considering their B-CC opponents rich and stuck-up. But according to former Blair football co-captain and Blair football and baseball coach Jerry Ricucci, '62, football was "the great equalizer" that allowed kids from both communities to compete on a level playing field.

Whatever its roots, the rivalry between Blair and B-CC was full of life. "It was just the biggest hype ever," says McCarthy. "It was like the Super Bowl." Most Blair graduates also remember the rivalry as amiable. "It was fairly good-natured - a few off-to-the side fights and disagreements but nothing too bad," says Roy Thompson, '63. 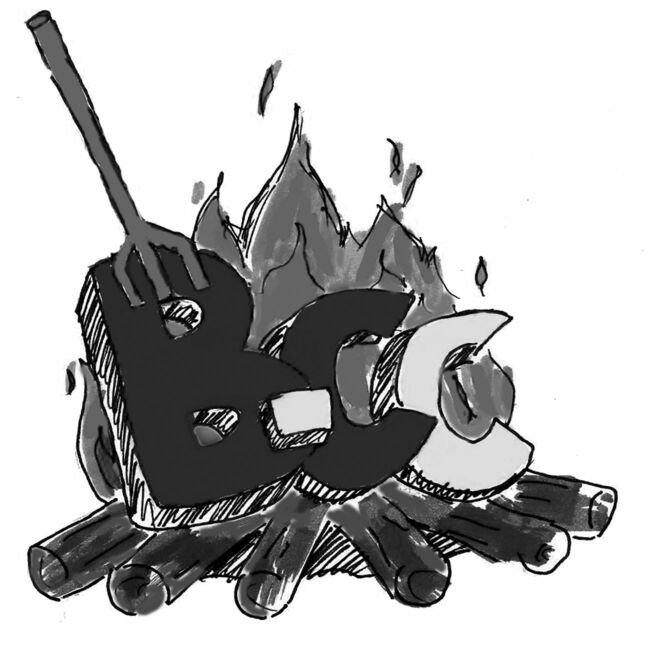 Photo:
But "good-natured" didn't mean the competition was completely innocent. Pranks were an omnipresent part of the rivalry. "You'd always wonder what the guys who didn't care about getting into trouble were gonna do," says Lynn Blana, '63.

Blair's most legendary prank - the one that alumni still talk about - was cutting down prized B-CC pine trees, which were the school's symbol (separate from the Baron, which is B-CC's mascot). According to Levin, classes from the '40s through the '70s are all rumored to have cut down one of the trees. "We are the class that supposedly cut down the pine tree," says Marguerite Kreshon, '46. But with Blazer pride she says she will never disclose the truth of who cut down the pine tree in 1946 to anyone. "I know who did it, and I will never tell," says Kreshon.

Blazers had other tricks up their sleeves as well. They pulled another notorious prank against the Barons in 1960, according to Ricucci. The night before a football game, a group of Blair students dug a large trench in B-CC's football field, which they filled with water. Because of the gaping hole in B-CC's field, the game had to be played on Blazer territory. Unfortunately for the infuriated Barons, Blair won.

B-CC was an active participant in rivalry mischief. According to Levin, going into the last football game of the year in the 1964/65 season, Blair had a record of 9-0. In response, B-CC painted 9-1 on its hillside to tell the Blazers that they were about to lose their first game of the season. In the end, though, Blair was victorious, winning the game and rounding out a perfect 10-0 season. Afterward, some Blazers poured lime over the dash between 9 and 1, so the hillside read 9+1, Blair's new record.

Beyond the pranks, Blair also had extensive pre- and post-game rituals to energize the entire student body, according to Ricucci. B-CC was the homecoming opponent every year. The week before the big game, the entire school was consumed in spirit week. Students decorated the hallways with posters featuring clever slogans about beating B-CC at the homecoming game, teachers slackened enforcement of school rules and Blair's fight song reverberated throughout the usually disciplined halls. Ricucci compares it to Dallas week, the week of hype and excitement before a Cowboys-Redskins game.

Photo:
The climax of spirit week was the fall pep rally on a Friday afternoon. Students got out of class early to watch the head coach give a speech and the cheerleaders and marching band perform. The pep rally culminated in a Powder Puff football game, in which girls played in male football attire as boys rooted for them in cheerleader's uniforms - a tradition still at Blair today.

After a long week of building spirit, Saturday - the much-anticipated game day - always began with a homecoming parade. Starting just beyond the light at Dale Drive and Wayne Avenue, the band, cheerleaders and poms marched down Wayne. Also in the procession were customized cars and hot rods, class floats, class presidents, the student council president, dance troupes, honor guards, Boy and Girl Scout troupes and even the principal.

Blazers and members of the community packed both the parade and game afterward. The entire week of spirit and spectacle concluded with a post-game dance in the Blair gym, says Ricucci.

But as new high schools began to pop up in the late '70s, the age of B-CC-centered bonfires, parades and pep rallies began to die down.

According to Blair athletic director and former B-CC basketball coach Dale Miller, in the late '70s and early '80s, Blair stayed in 4A division while B-CC left 4A due to a decrease in student enrollment at the school. Springbrook emerged as Blair's new opponent, particularly in basketball. The Springbrook rivalry persisted until 2004, when Northwood reopened and became Blair's newest rival.

But even with Northwood emerging as Blair's foremost competitor, much has changed since the '40s, '50s, '60s or '70s. In the 21st century, Blair lacks the innocence and cohesiveness of decades past created by school spirit. "The days of school spirit are not gone, but it'll be difficult for it to come back," says physical education teacher John Macdonald, '80.

Though John Macdonald believes school spirit is not as strong at Blair as it was during the mid 20th-century, he looks upon the packed stands at the varsity boys' soccer game against Northwood earlier this fall as a positive sign. If Blair can pull together against Northwood, we may achieve another B-CC-style rivalry yet.

Blair bamboozled B-CC in 1970, according to Blair athletic director and former B-CC basketball coach Dale Miller. Before a much-anticipated rivalry basketball game at B-CC, the Blair administration ended school early so that Blazers could buy tickets before the Barons, who were still in class. The game was sold-out. Students who couldn't buy tickets to the actual game paid to watch it broadcasted in the band room. While B-CC won the game, the outpouring of Blair support was nonetheless phenomenal.