The gang is finally in the Good Place — what's next?

Chapter 51 was called "Patty," and if you're confused about why, you'll find out in just a second. As always, there will be some spoilers, so be forewarned. If you don't mind, stick around until the end to hear our comments! Sit back, relax, and enjoy. With that, let's jump right into a quick plot summary.

The last episode of the show left off with the four humans, Michael, and Janet finally climbing into the magical hot air balloon that would take them to the real Good Place. Chapter 51 opens with a beautiful shot of the group cruising through the galaxy, which is complete with adorable flying puppies, before finally arriving at the Good Place. They are greeted by the Good Place architects. The architects, much to everyone's surprise, invite Michael to go to a swearing-in ceremony to officially become a Good Place architect, which immediately gets rid of any of his doubts that he doesn't belong.

The four humans make their way into their official welcome party, and find that it's a mishmash of all the things they love most — the Jacksonville Jaguars, celebrities to gossip about, shrimp, and philosophers like Hypatia of Alexandria, who Chidi immediately peppers with questions. 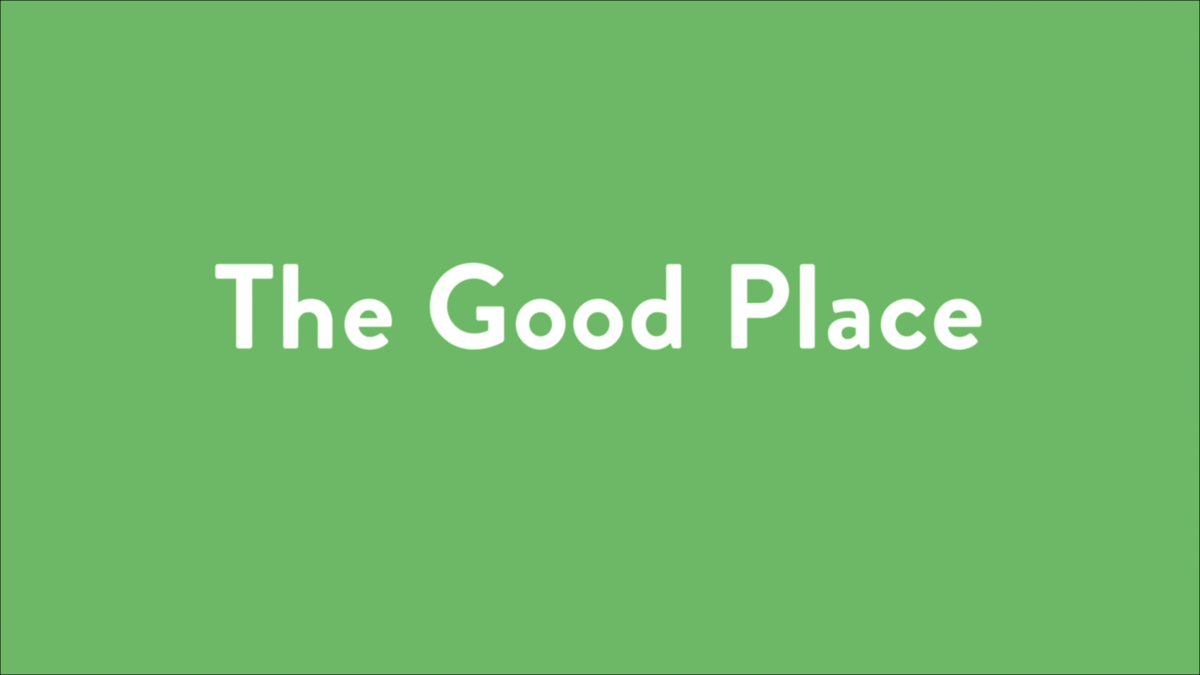 Photo: A summary of seasons one to four

Photo: A summary of seasons one to four

At the same time, at his ceremony, Michael obsesses over the scroll that will put him into his new architect position. But as soon as he signs his name, the Good Place architects drop a bomb — evidently, Michael didn't read the fine print. The scroll actually stated that all the architects quit, putting Michael solely in charge of the Good Place from then on! Michael freaks out a little bit and goes to find the others.

Meanwhile, Hypatia, who goes by "Patty," tells Chidi and Eleanor she needs to talk to them urgently. She tells them that the Good Place is actually not that good after all. She says that everyone is at risk of having their brains become zombie-fied because they are stuck in an infinite timeline where they run out of things to do. Chidi and Eleanor run back to the others to warn them, and they take advantage of Michael's new position of authority to create a plan. Michael remembers that long ago, Eleanor told him that people find joy in life because they know they'll die one day, so he decides to give people the option of leaving the Good Place if they so choose. They present the plan to everyone in the Good Place and it's met by a standing ovation.

The episode ends with the humans going to their houses in the Good Place. Tahani's is a mansion, Jason's is a replica of Stupid Nick's Wing Dump, his favorite restaurant in Florida, and Chidi and Eleanor's overlooks a beautiful coastline. As they take in the view, Chidi and Eleanor realize that the Good Place isn't really about a place at all — it's about time with the people you love.

Speaking of the ending, I found Chidi's quote at the end of the episode extremely heartwarming, but it also sums up the overarching message that the writers try to communicate through the show. In Chidi's words, "That's what the Good Place is… it's not even really a place, really, it's just having enough time with the people you love." Throughout the entire series, the gang has been all over, living through the Bad Place over 800 times, reuniting on earth, and visiting places such as the Interdimensional Hole of Pancakes and the Judge's office. After 50 chapters, they finally make it to the Good Place, but Chidi's analysis says it all— because they were enjoying their time with each other regardless of their location, the Good Place was the journey, not the physical place that was their original end goal. In a similar vein, their lives didn't suddenly improve and turn to paradise because they reached the Good Place— it was the journey of personal growth and helping each other that led them to become better people.

Maybe, when extrapolating the lessons from Chidi and the Good Place to use back in our own lives, we should focus on the journey and experiences that help us grow, and our materialistic goals will follow along as a by-product.

The gang also makes a key point when developing their solution for the Good Place— humans tend to only appreciate things when they know they might lose them. Just as you might not miss your jacket until you lose it, they find that the Good Place inhabitants can't enjoy their time in paradise simply because they're taking it for granted. However, I'm not sure if this is a viable solution for everything— if we want to truly appreciate something, should we just have less of it?

I think another important, albeit smaller, lesson to take from this episode is that history is complex. When the gang gets to the Good Place, Chidi immediately asks if his idols, Aristotle and Socrates are there. Janet informs him that they're actually in the Bad Place because they supported slavery. Obviously, in our world today, a lot of historical figures as painted as faultless, but Chidi's realization just reminds us that things are not always what they seem, and that we should evaluate everyone's positives and negatives.

As always, there were lots of references to the real world in this episode. Tahani roasts the popular music festival Coachella when she compares it to the Good Place, saying both of them make people become glassy-eyed zombies. Eleanor references those creepy Instagram ads in an apparent jab at big data. And, my personal favorite, the architects brainstorm a list of improvements for the Good Place that includes the item: "Wait for Beyonce to come and have her fix it." Honestly, that sounds like a good plan to me :) Also, I'm sure everyone noticed that Lisa Kudrow made a cameo as Hypatia in this episode, giving us a mini "Friends" crossover!

Let's talk about our predictions for the show's finale. What do you see in the future, Vivian? I think I'm expecting a happy ending for this show— I'm surprised that Judge Gen, Shawn, and Vicky weren't able to make it into this episode, but I wonder if they will be there for the finale [stuff about where they go]. Or, I wonder if the new humans who pass their afterlife test will also join the Good Place— instead of a paradise filled with people from the prehistoric times or the Renaissance. Will there be yet another problem to solve, or will the Good Place writers give us the happy, cutesy scenes we've been waiting for? I personally think there will be another small problem, even if it's a dilemma that involves just one person. Since we have a whole hour next week, I'm sure the characters will go through something that, once again, reinforces their relationships and gives them the typical happy ending.

We should also consider this episode's title when predicting next weeks ending— it's called "Whenever You're Ready." It does remind me of the solution they present at the end of this episode— that the Good Place residents can walk through the final doors to a peaceful end when they're ready to conclude their experience in paradise. Will Eleanor, Chidi, Jason, and Tahani leave when they're ready? Do you think we'll see some montages that span many Jeremy Bearimy's (as the end of shows often do, skipping into the future and tying the series together)? Or will Michael Schur and the other writers leave the humans' future up to our imaginations?

I guess we have to wait until Chapter 52 to find answers to all of those exciting questions, so we hope you'll tune in next week for the last episode of The Good Cast. On that note, we're going to sign off for today. We hope you enjoyed! Be sure to follow us @mbhssco on Twitter and check in at scoop.mbhs.edu for all the latest updates. See you soon, Good Place geeks!