A guide to the best St. Patrick's Day events in the metropolitan area

With St. Patrick's Day weekend just a wee bit away, its time to get started planning for the holiday that makes everyone feel Irish if only for a day. Whether you enjoy tapping your toes to an Irish fiddle, cheering on a spirited parade or diving into a dish of Irish cuisine, this guide to local Celtic fun is sure to bring out the inner green in you. 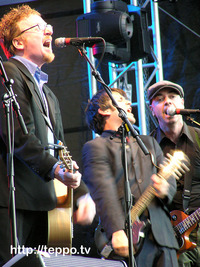 Photo: Celtic rock band Flogging Molly was among many bands who will be playing at the Shamrock Fest. Photo courtesy of Flogging Molly

Photo: Celtic rock band Flogging Molly was among many bands who will be playing at the Shamrock Fest. Photo courtesy of Flogging Molly

Come and join in the largest St. Patty's Day festival in D.C.: the National Shamrock Fest '07. Located on the RFK stadium festival grounds on Sat., March 10, the Shamrock Fest will begin at noon and feature 40 or more live acts on seven enormous performance stages. Well known Celtic rock bands such as Carbon Leaf, Flogging Molly, and The Connells will perform throughout the entertainment-packed day, joined by several popular DJs and performances from local Irish dancing groups. In addition to live performances, there will be an array of food and beverages, as well as acres of rides and games. The National Shamrock Fest promises to be one of the main events of 2007 not to be missed.
Tickets are currently on sale for $20 via www.shamrockfest.com.

36th Annual Washington D.C. St. Patrick's Day Parade
Ready to leap into the Irish spirit? Hop on the metro to go to the Nation's Capitol for the 36tth Annual Washington D.C. St. Patrick's Day Parade on Sun., March 11. As in the past years, the parade will begin at noon and proceed down Constitution Ave. from 7th to 17th St. in NW D.C. The district's finest 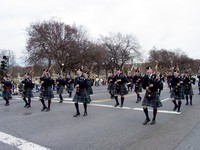 marching bands, bagpipe bands, Irish dancers, the police and military forces, will be marching in the parade among several extravagant floats. It is no wonder that thousands flock to the parade, which boasts being the most popular St. Patrick's Day parade in the D.C. area.
Parade information provided on www.dcstpatsparade.com.

McGinty's St. Patrick's Day all-day celebration
When the build-up to the holiday climaxes on the morning of March 17, roll out of bed and over to McGinty's Public House in Downtown Silver Spring for their first annual all day St. Patrick's Day celebration. Starting early and ending late, McGinty's will be serving food and beverages with a green twist, and traditional Irish bands will perform, with dancers and pipers throughout the day.

The day will conclude with a finale by the band Shamrock Rooster, which consists of several original members from the band O'Malley's March (which formerly featured Maryland's Mayor Martin O'Malley). Stop by March 17 to raise a glass to McGinty's St. Patrick's Day all-day celebration.
McGinty's Public house is located in Downtown Silver Spring at 911 Ellsworth Drive Silver Spring, MD 20901, and is accessible by bus and metro.

Kiltics concert at Piratz Tavern
Just when you think St. Patrick's Day is concluding, the party at the whimsical Piratz Tavern in Downtown Silver Spring will just be getting started. Tentatively scheduled to perform from 10:30 p.m. to 1 am, the Celtic band the Kiltics will take the stage for one of the best traditional Irish jam sessions around. The band comprises Blair alumni Jon Musgrove, Nora Arnold and Sarah Janesko and also features senior Laura Cole and Stevia Morawski. This group of young musicians performs traditional Celtic tunes to a variety of unique instruments such as the bodhran, the mandolin, the mouth harp, the lap dulcimer, and spoons.

This show will mark the second year that the band has been playing shows around the Metropolitan area. Kiltics t-shirts will be sold for $10 and stickers for $1 at Piratz Tavern during their show. "The show should be really fun and we will be debuting our newest member [Morowski]. We'll also be wearing new Kilts!" says Cole, who encourages Blair students to come out to the Priatz Tavern for a free show and St. Patrick's Day celebration.
Piratz Tavern is located at 8402 Georgia Ave. Silver Spring, Maryland 20901. For more information about upcoming performances and events at the restaurant, go to www.piratztavern.com. Also, check out the Kiltics on their blog at www.xanga.com/thekiltics or at www.myspace.com/thekiltics.