"The Grudge 2," the sequel to "The Grudge," fails to advance the already-exhausted plot-line. Aside from killing off Karen Davis (Sarah Michelle Gellar), it does little more than provide cheap scares via slow-pan shots. And, worst of all, it makes the seemingly straightforward story of Kayako, the not-so-friendly-ghost, even more complicated. 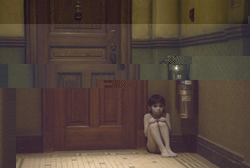 The second picks up where the first one left off. Davis is still nuts and in the hospital and the haunters are still a hauntin. Only now, because of Davis' interference with their "lives", the spirits are now free to go wherever they want and wreak havoc on whoever they do so desire, with no worry of a curfew. Aubrey Davis (Amber Tamblyn), Karen's sister and chosen victim for the sequel, comes into the picture when her mother learns of Karen's fate. Little Davis is sent on a mission to retrieve her injured sister from a Japanese hospital but falls victim to the curse when, despite the warnings of practically everyone capable of speaking, she ventures into our favorite, and now charred, dwelling.

Takashi Shimizu, the director, would be better suited cramming his ghosties into a clown car instead of a movie. His limited ability as director, and really just as a human being, surfaces after the 347th slow camera pan revealing yet another pale child hiding just around the corner. He seems incapable of deciding what to do with those abducted by the Grudge family, so instead just makes them disappear… completely… never to return. He makes the movie more of a haunted house than an actual story, with foreseeable twists and turns. His biggest twists: a cheerleader urinating on herself and a crazed woman badly overcooking her bacon.

In terms of plot termination, we could survive without a "Grudge 2." It neglects to further develop the plot, revealing no more than the reason why the girl with poorly maintained hair chooses to croak like a frog. If you're up for a scare, watch the first twenty minutes but, for your own health, limit it to that. Oh, and we can't resist: "Uh-h-h-h-h-h-h-h-h-h-h".

Cole Brown. Cole Brown is holier than thou. More »