Packed with mind-boggling mysteries and constant suspense, Young Adult writer Jennifer Lynn Barnes's "The Hawthorne Legacy" upholds her reputation as an innovative and creative author. Released on Sept. 7, "The Hawthorne Legacy" is the sequel to Barnes's New York Times best-selling novel, "The Inheritance Games". Her new novel, with all its puzzles and unanswered questions, is an even bigger hit than its predecessor. "The Hawthorne Legacy" had a debut week almost eight times as strong as the series' first novel. 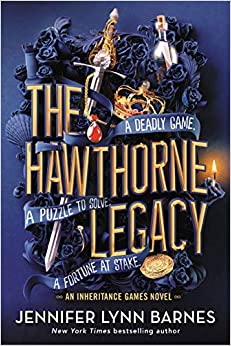 While Barnes is best known for her writing, she is also a psychology professor at the University of Oklahoma. In a Q&A interview, Barnes describes herself as a "psychology professor by day and a writer by night." Her psychology background has helped Barnes to craft the perplexing puzzles and surprising storylines that make her writing so captivating.

The series centers around Avery Grambs, a typical high school student. Grambs’ goals are simple: survive high school and find a way to pay for college. However, her uneventful life takes a turn when she finds out she has been left a fortune by deceased billionaire Tobias Hawthorne. Avery becomes famous overnight as her "Cinderella story" makes national news. All her problems seem to be solved, but there is a caveat: Avery does not know why Hawthorne left her the money, or even who he is.

To receive her inheritance, Avery must move into the eccentric Hawthorne's unique home, which is filled with secrets, from family scandals to passageways. With the occasional help of Hawthorne's four grandsons, brilliant and dangerous half-brothers who are suspicious of the new heiress, Avery unravels what may be the family's greatest scandal, while learning that some people are not who they seem to be.

“The Inheritance Games” ended in a cliffhanger, which is exactly where “The Hawthorne Legacy” picks up. Just as before, the novel kicks off with questions that readers may or may not be able to answer by the story's end. Barnes' psychology background appears as she consistently misdirects the reader and characters with tidbits of truth while the whole story lurks beneath the surface.

In the novel, a homeless man Avery used to play chess with turns out to be a Hawthorne and maybe even her blood relation. As Avery and the Hawthorne brothers piece together clues that Tobias Hawthorne left all over the country, they uncover long-buried family secrets, from paternity information and love affairs to a tragic teenage "accident," all while escaping threats from family rivals and greedy relatives.

As the story's plot revolves around an unusual puzzle-loving old man, it is no surprise that the novel contains a lot of puzzles, including invisible ink messages, riddles, and word play. Though Barnes intends for the audience to be young adults, many of the puzzles are too difficult for the average mind to understand. Unfortunately, sometimes readers just have to shrug off a confusing puzzle and follow the plot.

Yet while all the anagrams and hidden keys may seem far too convoluted for the average teenager, Barnes manages to keep up with the younger generation with games such as "Drink or Dare," an adult version of the popular game Truth or Dare that replaces the truth option with alcohol consumption, that Barnes presents in an appropriate manner.

One aspect that sets Barnes apart from many other authors is her avoidance of luck. Typically, the protagonists are saved the moment they were meant to die or slip through Death's hands often through pure luck. In "The Inheritance Games", characters are saved by pure intellect, either quick thinking or prior planning. There are no scenes readers can scoff at and say would never be possible in real life.

Even with all the competition and rivalries occurring within the Hawthorne family, Barnes explores the strength of the bonds between family members, despite how messy the Hawthorne family is. So although brotherly feelings seem nonexistent as the half-brothers challenge each other to bloody duels, it is clear that at the end of the day, if someone in the family needs help, everyone else will drop whatever they are doing for the family. Even Avery, who was viewed as a con-woman at first, is accepted by most of the family as they help her piece together her past. And as Barnes ends the tale with yet another cliffhanger, readers cannot help but wonder what's next.

Joy Song. Hi! My name is Joy, and I'm a staff writer. Apart from writing for SCO, I enjoy reading and listening to music. More »