"The Hound of the Baskervilles" is far from elementary

In his time, Sir Arthur Conan Doyle would have been analogous to the writers of the hit TV series CSI. Perhaps that is why a sold-out crowd filled Round House Theatre for the Lumina production of Doyle's "The Hound of the Baskervilles." The adult cast took on the widely known persona of Sherlock Holmes and Dr. Watson in their first story, and the result is something surely even Doyle would have enjoyed.

Blair English teacher and play director Kelly O'Connor directed and designed costumes for the production. O'Connor also took on the role of Laura Lyons in the play. Her husband John O'Connor wrote the script, which he adapted from Doyle's novel. He also starred in the production as the diligent-yet-sometimes-clueless Dr. Watson. 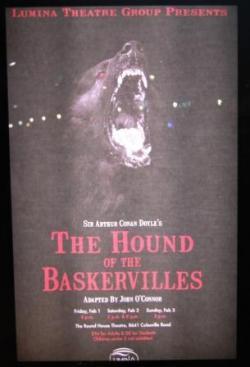 The Hound of Baskervilles poster

Photo: Blair English teacher Kelly O'Connor and her husband, John, were involved with the production of Lumina's "The Hound of Baskervilles."

Photo: Blair English teacher Kelly O'Connor and her husband, John, were involved with the production of Lumina's "The Hound of Baskervilles."

As legend tells it, the rich Hugo Baskerville of Devonshire was holding a young woman against her will before, one dark night, he chased her across the moor and was killed by a giant devil of a hound. The Baskervilles have been reportedly plagued by the hound ever since.

Such is the state of things when Dr. Mortimer (Michael Novello) visits the office of Sherlock Holmes (David Minton) and Dr. Watson. Mortimer was a medical assistant and close friend to the recently deceased Sir Charles Baskerville, a descendent of Hugo. After Mortimer recounts the Baskerville legend, he describes enormous dog tracks around the dead body of Sir Charles, and also mentions that Sir Henry Baskerville (Robert Lach), the heir, is on his way to Devonshire.

Holmes eagerly takes the case in his fervor to defeat myths with empirical reasoning. Regretfully, however, Holmes is unable to travel to Devonshire and therefore sends Watson to protect Sir Henry and simultaneously solve the case.

In just these few opening scenes, the mastery which these actors and actresses have over their characters and their lines is readily apparent. Minton plays the great detective in uncanny perfection, while decked out in the quintessential hat and cape of Holmes, designed by Kelly O'Connor. He speaks his complicated lines with acute pronunciation and handles himself in the same air that the brilliant Holmes undoubtedly would have.

But most impressive is the realistic and humorous relationship between Holmes and Watson. As the sidekick, Watson is ever trying to follow in the same methodical footsteps as Holmes, yet is continually corrected by Holmes in a paternal manner. Minton and O'Connor achieve this chemistry perfectly. The pair also humor the audience, especially in one such scene when Watson suggests that there must be a man behind the killings, and Holmes simply replies, "Or a woman, Watson."

For the remainder of the play, Watson studies Devonshire, collecting notes and interviewing neighbors such as Mr. Stapleton (John Witney) and his sister, Beryl (Bette Cassatt). He's racing against time, trying to solve the murder before Sir Henry, too, falls to the hound.

As Mr. Stapleton, Witney is a powerful asset to the cast. His ability to portray believable dynamic emotions in such a wide range – from butterfly catcher to fierce anger – is impressive.

The acting all around is superb, even in the absence of a heavily developed set. A fog machine, a fantastic violinist (Blair sophomore Rachel Gelfeld) and a spooky dog howl are all this cast needs to toss the audience into 1902 Devonshire. John O'Connor's script is beautifully written, capturing all the intricacies of Holmes's speech and staying consistent with Doyle's style of prose.