The in thing is to be out

Tyra Banks and Oprah Winfrey have abandoned their talk shows. Miley Cyrus has declared her alter ego Hannah Montana is destined for extinction. Simon Cowell has announced he's leaving "American Idol." Next thing we know Jay Leno will be off primetime - oh wait, he is. 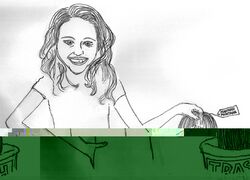 Photo:
In an inexplicable new Hollywood trend, many celebrities have recently decided to discontinue participation in their own TV shows. Neither Oprah, Banks, Cyrus, Leno nor Cowell can cite lack of popularity as an excuse. Although "Idol" has suffered a decrease in viewers in the past two years, there still remain millions of dedicated viewers who were devastated to hear of Cowell's departure from the most-watched show in America. And the Miley/Hannah rave is far from over; preteen girls across the country will dread saying goodbye to their icon when the show airs its final season next year. Winfrey, Banks and Leno have also been TV staples for years and many viewers may not be open to readjusting their schedules to see Leno in a later 11:35 p.m. time slot.

Women across the country have been constantly inspired by the stirring stories on Oprah and Banks's talk shows since their beginning. According to a NY Daily News article, Ellen DeGeneres said of Oprah, "I think she has blazed a trail…She will always be the queen of daytime television." As of right now, there seems to be no show with similar themes of empowerment that will replace Banks's and Oprah's reign of female influence. Fans of Leno, Cowell and Cyrus, on the other hand, need not fret since the stars will maintain presence on TV, or in films in Cyrus' case.

So what can we blame for this trend in show abandonment? The country's unique economic and political situation? Not really. These stars are wealthy enough to elude any sort of jolt in relation to hardships on the political and economic front. It seems to be merely a striking coincidence that they have all decided to move on to bigger and better things at the same time, with the exception of Leno, whose show was moved to accommodate NBC affiliates' needs, according to Entertainment Weekly.

Oprah wants to focus on launching The Oprah Winfrey Network, Cyrus hopes to take on more mature roles as she herself matures, Banks plans to pursue new career options while continuing to reach women in a broader spectrum and Cowell wants to dedicate more time to debuting his popular British TV show "The X-Factor" in the United States. They have all simply decided they need a change of pace.

And maybe so does TV. In that strand, these empty time slots may provide positive opportunities for the little-known yet deserving celebrities - or new stars - to make it on TV. We'll see who will have the x-factor to take their places.