The Kardashian event of the year

"Kim's Fairytale Wedding” premiered on E! as a two day event celebrating the marriage of Kim Kardashian and Kris Humphries

It's safe to say that the Kardashians live in a completely different universe, one filled with nothing but glitz and glamour. Whether it's planning a wedding in nine days for Khloe and Lamar Odom or broadcasting the birth of baby Mason (child of Kourtney and Scott Disick) on E! Network, the Kardashians have never been shy when it comes to exposing their lavish lifestyle to fans. So when Kim Kardashian flashed her two million dollar engagement ring at the end of season six of "Keeping up with the Kardashians," viewers knew that they were soon to witness the wedding to end all weddings. 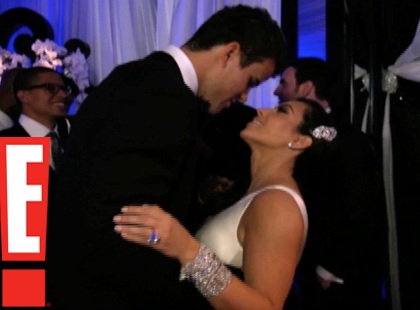 "Kim's Fairytale Wedding" was a two day event on E! Network. The first episode consisted of Kim's bridal shower, the engagement party and the signature ridiculous (but entertaining) Kardashian drama. The second episode highlighted Kim's pre-wedding stress, the bachelor and bachelorette parties and the actual wedding. The event was four hours long, and a well spent four hours indeed.

Kris Humphries, the man who stole Kim's heart, didn't exactly impress the viewers with his charm. During the two day event, he was a trending topic on Twitter – and not for anything good. Throughout the episode, he was portrayed as being rude to Kim's family members, especially younger sister Khloe. He was constantly saying that he wanted to be a part of the wedding and not just a man who shows up, yet he was late to every single wedding-related appointment on the show. Even when he was punctual, it seemed as if he was no help at all. Despite his childish behavior in the weeks leading up to the wedding, Kris definitely made a comeback in the days right before it. He helped Kim get through the absence of her late father, Robert Kardashian, and actively worked to make the wedding nothing short of amazing.

Aside from all of the drama with Kris, Kim's wedding was one of the most well put together and thoughtfully planned out weddings one could ever dream of; it also came with a hefty price tag: an estimated ten million dollars. The wedding was held at Sotto II Monte estate in Montecito, Calif. and the ceremony was held in a black and white tent decorated with drapery and crystals. The guest list was celebrity studded and all guests were requested to wear black and white.

The members of the bridal party were dressed in white from head to toe. After viewers saw the bridesmaids and groomsmen walk down the aisle, they were able to see Kim looking stunningly beautiful in a pure white Vera Wang dress with a tight bodice and tulle skirt designed exclusively for her. The dress was accompanied by a diamond headpiece. Once Kim walked down the aisle, she then met up with Kris at the altar, where they exchanged vows and ultimately were married. The ceremony itself was flawless.

The reception following the wedding was its own extravaganza. Kim changed into another Vera Wang piece that had a tight silhouette and a long, frilly train, while Kris wore a pure white tuxedo. The black and white theme of the reception was emphasized through the couple's black and white cake, over the top white centerpieces and crystals.

Viewers also got to see the couple share their first dance. After the first dance, Kim changed into the last dress of the evening, the most gorgeous dress of them all. It was another Vera Wang piece with a classic Hollywood theme. Kim paired the deep neckline, champagne silk satin dress with diamond earrings and a diamond bracelet. Both Kim and Kris looked stunning throughout the entire event.

"Kim's Fairytale Wedding" really was something that has never been done before. From the completely crystallized cross hanging over the altar to the three Vera Wang wedding dresses, this episode proved that there are certain things that only the Kardashians can pull off. With two of the Kardashians married, I'm sure most viewers would agree that we can't wait until the next Kardashian (Kourtney, we're looking at you…) decides to get hitched.