The lights dim in the Patriot Center and a montage of grainy black and white images-a ram, Miss America, Las Vegas, and the American West-shine on an enormous screen that masks the stage. As the screen lifts, red, white and blue confetti rains down on the audience below. Then come the pounding bass, soaring synthesizer and idiosyncratic vocals. It can only be The Killers.

The Killers put on a loud and entertaining spectacle on last Thursday's show at the Patriot Center, leaving audience members with pounding ear-drums and memories of a an unforgettable night. They opened the show with four songs from their new album, including fan-favorites "When You Were Young" and "Bones." 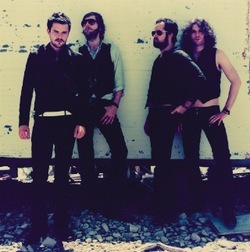 Though lead singer and keyboardist Brandon Flowers kept audience interaction minimal, his energy made up for it as he bounced from the floor to flat-top crates and struck dramatic poses while singing to the rowdy crowd jumping in unison to the beat.

The band alternated between songs from the new album and their sophomore hit album "Hot Fuss." After the first few songs, Flowers took to his sparkling red keyboard for a few dramatically elongated notes before the band dove into their 2004 hit, "Somebody Told Me" to the excitement of the audience, who shrieked the lyrics over Flowers's magnified voice.

Though the Killers played literally every song from "Sam's Town" in addition to a selection from "Hot Fuss," these boys managed to keep each song exciting and fresh, rather than allowing them to blandly blend together. Though Flowers's dance moves were not up to par with the rest of the performance, his voice filled the auditorium with the same richness he has in recording.

The opening act was the unlikely group. Silver Beats, a Japanese Beatles cover-band, whom The Killers met in Tokyo while filming the music video for "Read my Mind." Clad in the black and white suits with appropriate mop-cuts, the band got a huge rise out of the audience, who joined in on Beatles classics such as "Ticket to Ride" and "Come Together." Though the Silver Beats didn't light a candle to the headliner, their performance was memorable (albeit five minutes too long).

It's been three years since The Killers assumed their throne as the kings of synth-pop with "Somebody Told Me." From here, the band shows no signs of stopping. With their engaging, entertaining, and particularly loud performance, it was hard not to enjoy a one-night stay in "Sam's Town."

Josie Callahan. Josie Callahan is particularly opinionated despite her small appearance. She loves everything Irish and her life is consumed by her one true love- Irish Dancing- which suits her just fine. She also adores British accents, performing, theatre, tiaras, and sparkly dresses. Josie is particularly excited ... More »