"The Last Legion" is certainly a first

Everyone knows the story of King Arthur and his famous sword Excalibur. But not many know the story of Excalibur before there was a King Arthur. Based on Valerio Manfredi's historical adventure novel by the same name, "The Last Legion" brings viewers an epic tale of Excalibur pre-stone, filled with hectic battle scenes and enhanced by extraordinary acting. 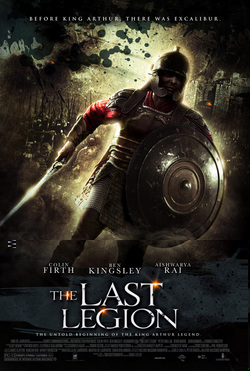 Photo: "The Last Legion" is full of intense and gripping battle scenes. Photo courtesy of The Weinstein Company.

Photo: "The Last Legion" is full of intense and gripping battle scenes. Photo courtesy of The Weinstein Company.

The newly-crowned Caesar, 12-year-old Romulus Augustus (Thomas Sangster), faces grave danger after Odoacer (Peter Mullan) leads the Goths in an attack on Rome, killing Romulus's parents and capturing the city. Together with his tutor Ambrosinus (Ben Kingsly), Romulus is sent to the island fortress of Capri. There he discovers Excalibur just before being rescued by Rome's military commander Aurelius (Colin Firth). Then the group, along with the Byzantine warrior maiden Mira (Aishwarya Rai) and a small band of Aurelius's men, set off on their journey into Britannia to find the ninth legion and win Rome back.

While the storylines of King Arthur's legends are long and complicated, "The Last Legion" has a simple plot that is easy to understand and follow. Director Doug Lefler creates a single fast-paced adventure in which the characters' one goal is to find the ninth legion and wage war for Rome. There are no unnecessary distractions along the way.

Filled with action, the movie contains multiple battle scenes complete with hectic chaos without bloody gore. Each scene shows off brilliant combat moves that look like they were pulled out of a martial arts movie. Every battle is carefully put together to show the growing tension, the near loss and the definite win. Rai shows off her terrific agility in each battle scene as she takes on five or six grunting barbarians at a time.

Without the dedication of the actors in their roles, the movie would have seemed corny. However, the skillful acting makes the story seem real and intense. Sangster fits into his role, portraying both the kingly attitudes of a royal and the juvenile desires of a child. Kingsley revels in his role as the mentor, fighting and explaining like a second Gandalf, complete with gray hairs, white robes and a staff. Firth plays the part of a noble, grim commander well, fighting with bravery and loyalty for his Caesar. With such a brilliant cast, it's no wonder that the movie is so avid.

The costumes, designs and cinematography are detailed and intricate. The sword Excalibur is distinctive with delicate words carved on the blade and gems decorating the hilt. Cinematographer Marco Pontecorvo does an exceptional job showing off the mountains and fields along the characters' journey. It's startling how Rome can be portrayed first at its best, with great statues and buildings, and then transformed to its worst with crumbling walls and dark shadows.

Simpler than most epic sagas, "The Last Legion" is a clean, light story containing a legend and even some hints of humor and irony. It's no "300," but it's perfect for a family looking for an entertaining yet straightforward medieval tale with intense action.

The Last Legion (110 minutes) is rated PG-13 for sequences of intense action violence. It is now playing in theaters everywhere.

Emily Hsiao. Emily is a Magnet senior who is extremely scared of pokes. She enjoys wasting her time watching Asian dramas, listening to Chinese music and reading novels late into the night. She loves to make her friends happy and doesn't mind when they laugh at her ... More »