The magic behind the scenes of a Blair theater production

What goes into producing this year's fall play

Based on the posters for this year's fall play, Blair is in for a fantastic production. One may be looking forward to scenes based off of Aladdin and Alibaba and the 40 thieves, along with the story of Scheherazade and how she helps a ruthless king undergo a massive character arc. But what many Blazers may not know is what goes behind the making of the production and just how much work it takes.

John O'Connor attempts to adapt the fall play as accurately as possible, looking at the original source material. "I got the latest translation of [1001 Nights] in English and that was very helpful because what I wanted with all the tales was to produce stories which were faithful to the original way which they were told," John O'Connor says.

When deciding what play to produce, the O'Connors look for plays that have a variety of different aspects that are favorable for Blair theatre, such as a large cast and interesting roles. "You want to play that has a nice big cast with roles of a variety of size and challenge. You want to really be able to challenge the more veteran performers, but also give interesting, fun roles for people who are newer at this," Kelly O'Connor says.

The directors also attempt to choose plays with large female casts. Since many classic plays focus on a mostly male cast, the O'Connors strive to choose a production that has many female characters, especially since many female students audition for roles in the play. When well-known plays with small female casts are produced, the directors change a large number of male roles into female ones. "Last year, when we did a play about the Trojan War, Agamemnon, King of Kings was played by two female actors and when we did Hamlet, Hamlet was played by two female actors," Kelly O'Connor says. For this year's fall play, every student that auditioned for a role was cast. Almost 70 students tried out for "Tales from 1001 Nights" and every single one received a speaking role, much to the directors' joy.

Blazers with both big and small roles enjoy acting in the play. "It's fun, you get to be someone else for a bit," freshman Jonathan Cumblidge explains. Some students aim for smaller roles during this fall play to hopefully get bigger ones as the year goes by. "I have four lines, it's smaller, but if I do well, I might get a bigger role next time," senior Steven Carrasco says.

Many actors and actresses feel a connection with the role they're playing. Lead actress and assistant director Hemakshi Gordy has a great amount of respect for the character she portrays. "Something I really love about Scheherazade is that she's a really incredible woman, one of the most incredible women in all of literature, she puts herself in dangers way and not only finds a way to save herself and all the other women but also finds a way to do it that is still fueled by compassion and has this undying faith in the ability of people to change," Gordy says.

Actors and actresses with larger roles also have more freedom to explore the role they're cast in. "I'm growing so much as an actor through this role because I have a lot of creative license with this role. Scheherazade tells stories throughout the whole play and me being in her role means that I get to tell the stories through my own interpretation of her experiences," Gordy says.

Once rehearsals begin, the O'Connors include student input on different parts of the production. While Kelly and John O'Connor influence the play to fit their view of what the production should look like, both have an open mind, often changing many aspects of the play before opening night. 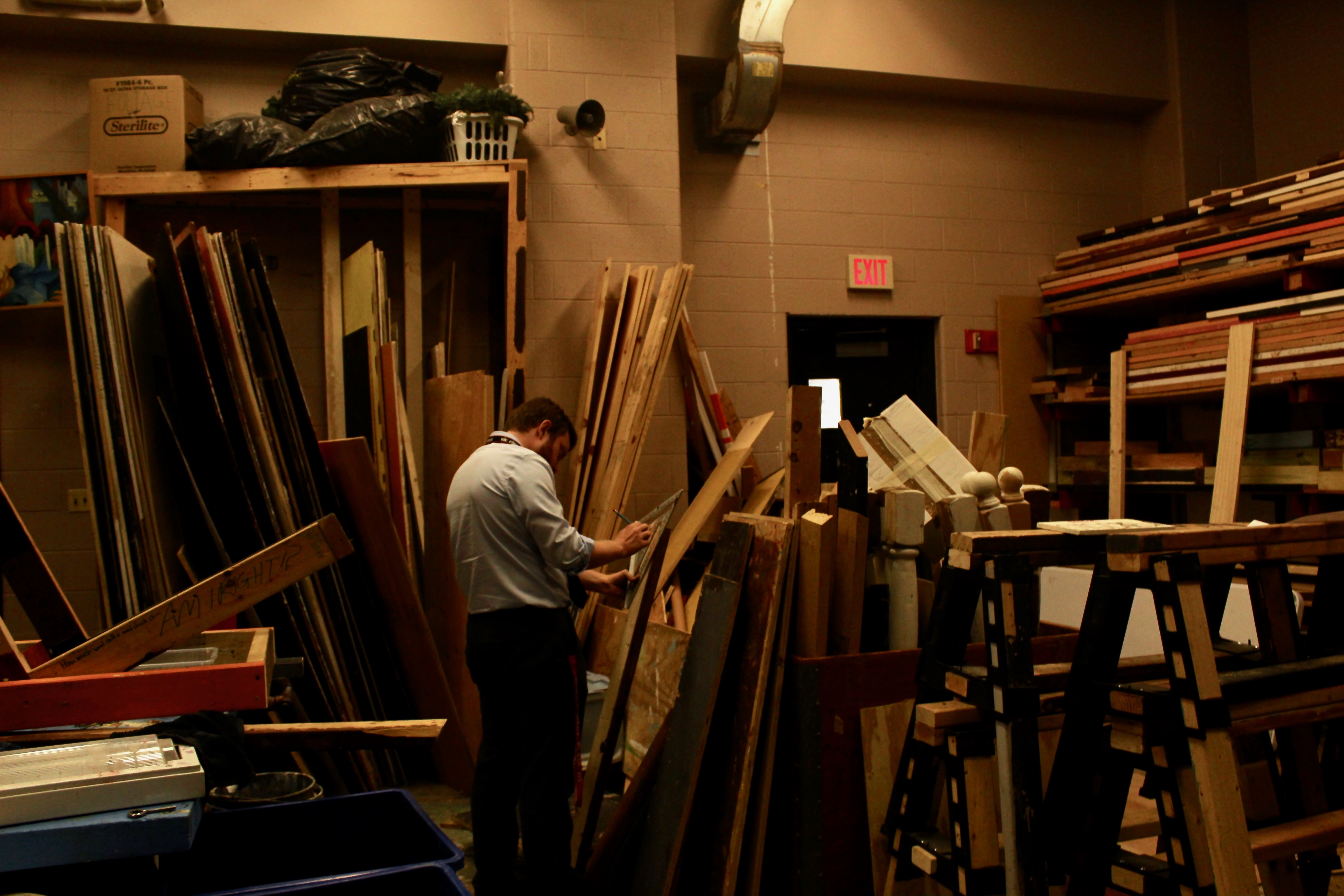 As rehearsals continue, the building of the play's set starts as well. Stage crew is broken into sections, but all members of each section spend an amount of time on carpentry since it has a big focus. One of the most essential parts of the production is where it is being performed, and stage crew puts a large emphasis on building that set.

Every year, audience members watch the fall play onstage and seating is built by the stage crew. "We always have to build black box walls for the fall plays, every fall play is set on stage and the audience also sits on the stage," Co-president of stage crew Annie Hicks says. Being on stage, audience members have a more active role viewing the production. "It's really great having the audience on three sides since that gives you more flexibility and the whole stage is really alive when the audience is right there with you," Gordy explains.

A new addition to the special effects for this year's fall play is the use of projectors. Stage crew is hoping to utilize this new technology by integrating them into the background of some scenes.

During the final few weeks before opening night, actors and actresses attend Saturday rehearsals, which are each six hours long. Since these rehearsals are on weekends, it also allows actors and actresses to approach them with a revitalized energy. "In some ways, it's more fun because you haven't just been through a long school day you're coming fresh," Gordy explains.

Stage crew also comes in during these rehearsals to finish up sets for the production. Stage crew has a more relaxed schedule compared to actors' and actresses' rehearsals, during these final few weeks, those in charge of building the set try to get as much done as possible.

Costumes are also fitted during these Saturday rehearsals. They are brought from the garage most Blair costumes reside in and are altered by those in charge of costumes. A small number of students and even parents with exemplary sewing skills adjust actors and actresses costumes in the rush of these final rehearsals.

All of the work done for this play will come to fruition on Nov. 14, opening night. Those who are working on the play hope audiences will come in with an open mind. " I hope that people can come into it, looking to hear stories, because that's what it's all about," Gordy says.