The Magic of Homecoming 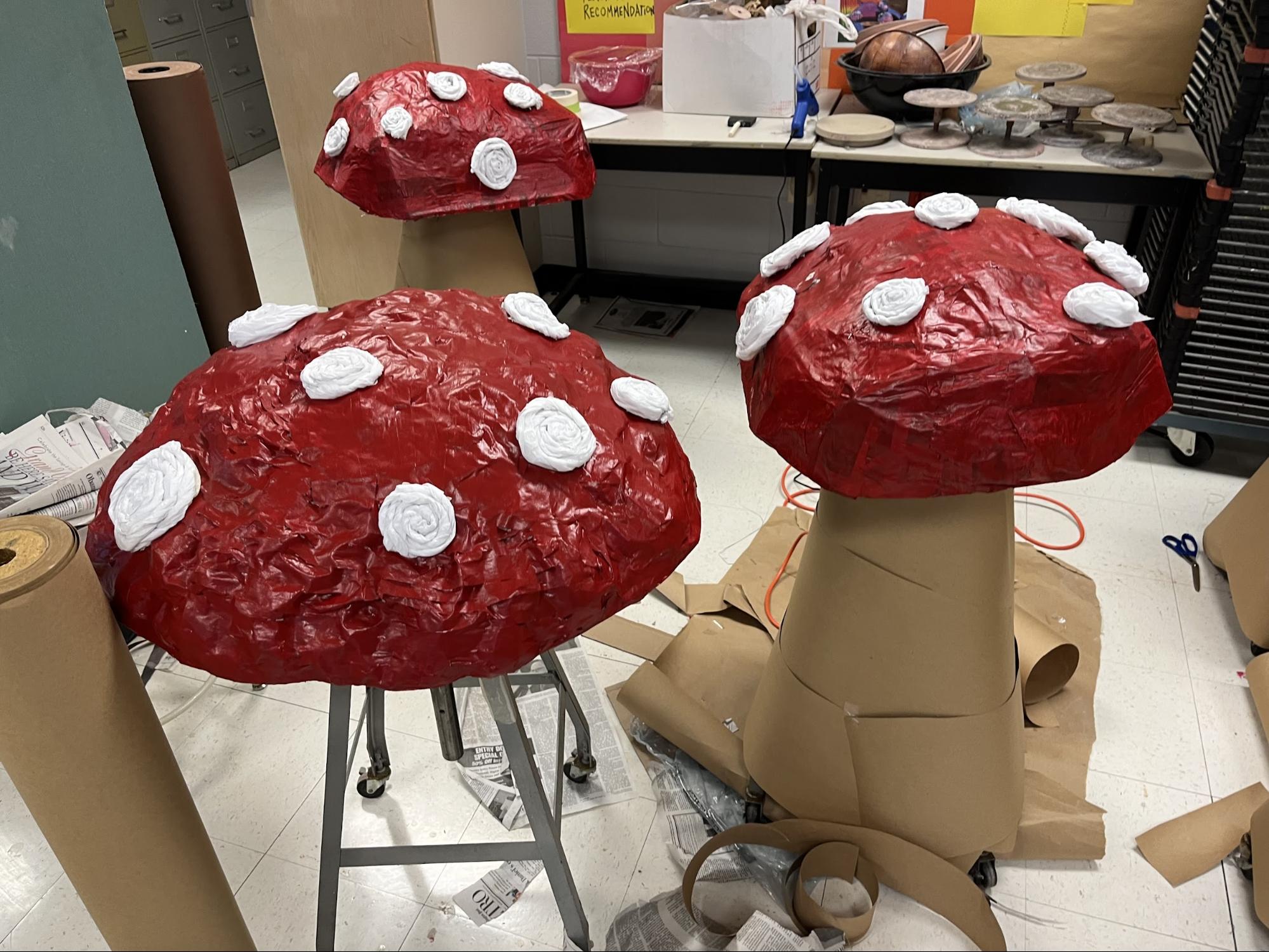 ﻿In Room 009, three students cover a paper mache mushroom in bright red paint. Another student forms white circles out of tissue paper to glue onto the mushrooms. A fifth is folding white tissue paper onto coat hangers, bent and shaped like the frame of a butterfly. No, this isn’t an art class: these students are spending their lunch times making decorations for this year’s Homecoming dance.

The dance is scheduled to occur this coming Saturday on Oct. 1. These decorators are a small part of the school-wide effort to make the event happen.

The planning for this year’s Homecoming started long before the decorations. Starting in the spring of the last school year, the SGA started working with a company to get DJs going, and picked out a date for Homecoming. More complicated decisions, like the theme, stayed undecided until this year.

The SGA is in charge of planning this event, and works hard to make sure everything goes smoothly. The body is split into several different groups, each committed to an aspect of the event. According to SGA President Ernest Lingani, there are multiple different committees, and every committee carries out a different task. Because of the scale of Homecoming Week, everyone in the SGA is involved in some aspect.

Each of the different subcommittees have different focuses. For example, groups include Homecoming decorations, activities and duties, Spirit Week, Pep Rally, and Public Relations. Each group is aptly named to suit their function: The Spirit Week committee, for instance, brainstormed themes for each day of the week leading up to the Homecoming dance, before the entire SGA voted on the ideas. Ultimately, the themes of the four days that lead up to the Homecoming game are “Anything but a Backpack,” “Worldwide Wednesday,” “Surfers vs. Bikers,” and “Red Out.”

While each committee might have their own focus, they still work together when they need to accomplish a certain task. After the ideas for the spirit week were finalized, the Spirit Week committee had to make them known. Once the administration approved the themes, the subcommittee worked on creating a banner while Public Relations updated their social media. This banner was visible in the first floor hallway by the University Blvd. entrance, and displayed the four themes. The SGA’s Instagram, @mbhssga, has several posts updating the public on everything from the different themes for the spirit week, to where and when to buy tickets for the dance.

The SGA has this down to a science, as SGA Vice President Cate Sauri explains. “It helps [that we] have everything organized so we know who to go in for, who to check in on, [and] everything is put in a spreadsheet when it comes to our budget,” Sauri says. “We have a whole decoration sheet with prices, links. Everything is very organized.”

Still, the SGA isn’t the only party responsible for all of Homecoming. National Art Honors Society (NAHS), which is working with the SGA to create and place decorations for the event, deserves its fair share of the credit. Members of NAHS come in during lunch and after school to work on the decor. While they might not have come up with the theme for the event, their contributions account for many of the ornaments that will embellish the Homecoming dance floor.

The two groups coordinate to make this possible. While the SGA installs the decorations on the day of, NAHS creates them and plans out where they go.

It is neither the SGA’s nor the NAHS’s first time planning this event, but that doesn’t mean nothing’s changed between the years. This year is going to be unlike the last. For one thing, we aren’t just coming back from a virtual year of schooling. “It’s definitely going to be different,” Sauri says. “Last year was our first time in a while… We were returning from the pandemic, so there were a lot of things that we just didn’t know. Until a couple of weeks before, we were still wondering if it was going to happen.”

As a result, the SGA will implement several changes on Homecoming this year. One difference is the repeal of a rule implemented last year, where only MCPS students were allowed to be guests to a Homecoming dance. This year, guests are allowed to come from outside of MCPS schools.

One of the biggest changes, however, is the SGA’s choice to allow the student body to choose the theme of the Homecoming dance. Circulating a poll earlier this year, the form provided four ideas for students to vote on. Out of the four themes, “Enchanted Forest,” “Roaring Twenties,” “Night at the Art Museum,” and “Masquerade,” “Enchanted Forest” had the most votes.

On the NAHS side, the only change is the addition of three-dimensional sculptures, shaped like mushrooms. These paper-mache figures mark the first sculptures since NAHS began collaborating with the SGA a couple of years ago.

Foraker explains how the collaboration came to be. “It started a couple of years ago, [when] we did decorations for the Hollywood theme, and since then, since we did a really good job, [the SGA] has continued to ask us to make Homecoming decorations.” With this year’s detailed sculptures and ornaments, the society continues this trend.

Detailed planning has definitely gone into this event, and this year’s is something to look forward to. As she describes the decorations being built in her room, Foraker says, “They’re doing a good job.” And they are– both the students in NAHS and the ones in SGA.


Sarah Zhang. Hi, I'm Sarah Zhang! I'm a writer and artist for Silver Chips Online, and in my free time I like to read books and other short stories. More »