The Miracle of "Dunkirk"

Christopher Nolan's Dunkirk is a landmark combat thriller, unprecedented in cinematic scale and technique. The film invokes powerful emotions creating an atmosphere where viewers unconditionally commensurate with the brave heroines' profound story. Nolan's masterpiece recounts the intense and imperative evacuation of Dunkirk from three different perspectives: The mole (the beachhead), sea, and air.

The movie depicts events starting in early June of 1940, when the bulk of the British expeditionary force and remaining French army were forced into the small port city of Dunkirk by the Germans seemingly unstoppable offensive line. Operation Dynamo, more commonly known as the battle or miracle at Dunkirk, was a last ditch effort by Allied forces to evacuate stranded soldiers and save as many lives possible from the advancing German enclave. Expected to only save a maximum of 30,000 lives, over 338,000 soldiers were successfully evacuated back to England. 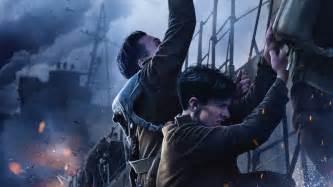 Photo: Nolan's use of Large-Format allows for enhanced cinematography and detail.

Photo: Nolan's use of Large-Format allows for enhanced cinematography and detail.

From the start, Nolan captures his audience's attention as the first scene flashes battle weary British and French soldiers scavenging houses in a eerie, abandoned city. Thousands of leaflets rain down from above. In bold text the leaflets read, "We Surround You". The relative tranquility of the moment is disrupted by the distinctive crack of rifle fire. This is the first of many scenes in the film where the viewer becomes deeply immersed in the story.

Dunkirk remains uncharacteristically complex in comparison to the average war movie. Each perspective, the mole, sea and air, were equally developed, as Nolan emphasized that every aspect of the Dunkirk evacuation was equally important to saving the lives of thousands of soldiers.

Undoubtedly, one of the most intrinsic and monumental accomplishments in Dunkirk was the grand scale of the movies cinematography. Nolan shot the majority of the film in large-format, a style of filming unusual in our digital age. This type of cinematography allows for specific details to emerge on a greater scale. The cinematography was especially crucial in the film due to the minimalist dialogue. The majority of the plot is revealed through reaction shots and wide angle shots.

One of the more stylistic choices of the director was to hire average British boys in the film. The majority of the main characters in Dunkirk have never appeared in a major film before. The purpose of this was to convey to the audience that these were just young ordinary men, fearful for their lives and desperate to return home safely.

Another factor was the sheer scale of the filming operation. Nolan used a British destroyer built in the 1930's, three working Spitfires (british planes), and 50 period boats, some of which actually made the journey to Dunkirk and back during Operation Dynamo, to make the movie as realistic as possible. This type of painstaking detail that went into recreating the historic evacuation is why the audience was able to feel as if they were witnessing the miraculous deliverance from hell for real, for the first time.